The McNamee Gallery is named for Maurice B. McNamee, S.J., 1909-2007, who pioneered the study of studio art and art history at Jesuit universities and who single-handedly preserved and restored the Cupples House. 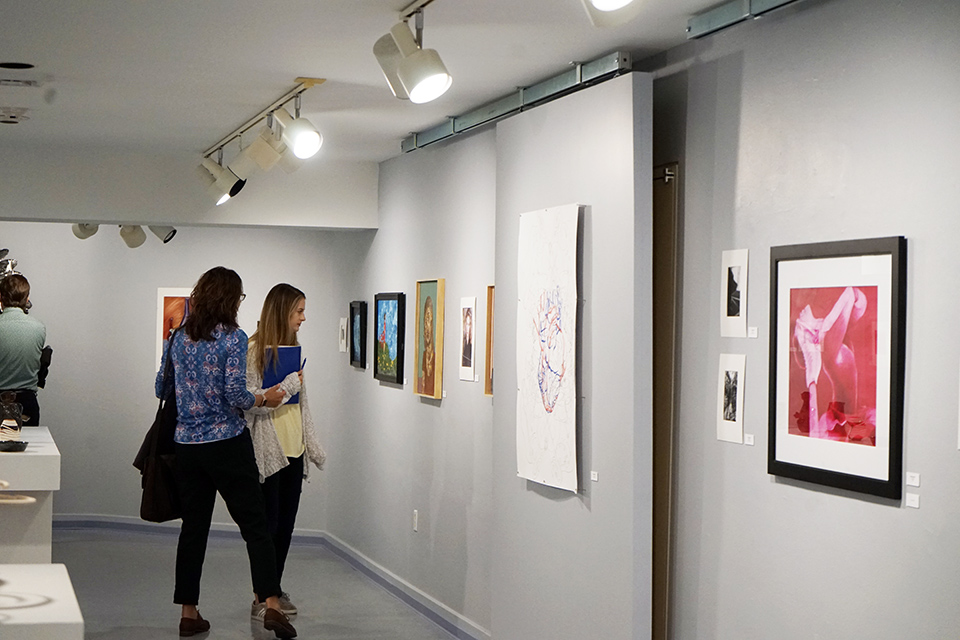 The McNamee gallery supports the studio art curriculum by exhibiting artwork by students and faculty, as well as visiting artists. Students are involved in the conception, organization, and installation of exhibits, publicity and gallery events.

The McNamee Gallery is currently closed as a safety precaution due to COVID-19, but virtual exhibitions are available.
View the Virtual Exhibit

A professor emeritus of English, art and art history, Father McNamee or "Father Mac" as many called him, was associated with SLU as a student or teacher for nearly 75 years.

"Father Mac will be remembered for saving Cupples House, but he did so much more for art and cultural appreciation on campus," said University President Emeritus Lawrence Biondi, S.J. "As much as he cared for art, he cared for his students more. The impact he had on the world around him cannot be measured. Father Mac embodied the Jesuit tradition - he truly was a man for others."

In 1964, the University planned to demolish Cupples House, then being used as a student center. But Father McNamee wouldn't hear of it. He championed the history, architecture and significance of the building — it is a rare example of Richardsonian Romanesque architecture in St. Louis. After saving Cupples House from the wrecking ball, Father McNamee wouldn't settle for mere preservation. He made rehabbing the three-story, 42-room home his personal quest. During its restoration in the early 1970s, at times Father McNamee was a painter, an interior designer and a finder of lost art — often he was found in Dungarees with a scraper and paint brush working alongside other volunteers.

Although the mansion was built and paid for in 1890 by millionaire woodenware merchant and philanthropist Samuel Cupples, many call it "the house the Mac built." Father McNamee's efforts were rewarded when the mansion was named to the National Register of Historic Places in 1976.

Saving and restoring Cupples House may have been a monumental effort, but not a surprising one for man who devoted his life to supporting the arts and to instilling generations of students with a love of literature and culture.

Born June 5, 1909, on a farm in Montello, Wisconsin., Father McNamee came to Missouri in 1927 to enter the Society of Jesus at Florissant. He was ordained to the priesthood in 1940. Father McNamee received his bachelor's, master's and doctoral degrees from Saint Louis University.

Father McNamee joined the English faculty in 1944. During a teaching career that spanned 110 semesters, Father McNamee touched the lives of thousands of students, including that of Terry Dempsey, S.J., who calls Father McNamee one of the greatest teachers he ever had.

"When I was thinking about joining the priesthood, I asked him how he dealt with discouragement and disillusionment," Dempsey said. "He said measure of person's character was his ability to deal with disillusionment, not to succumb to it and to retain his own ideals in spite of it. These weren't just words to him. He lived those words."

In 1973, students honored Father McNamee for his dedication with the Nancy McNeir Ring Award for Distinguished Teaching. In 1981, he earned the University's highest honor for service, then known as the Fleur-de-Lis Medal.

Forging His Own Path

In the 1930s, when Father McNamee wanted to pursue graduate work in art history, he received no encouragement from his superiors. He was told there was no demand for the subject, and indeed at the time, there was not a single course in art history at any Jesuit high school, college or university in the United States.

So the young scholar studied English instead and went on to a distinguished academic career in that field. He wrote several well-known books, including the popular textbook, "Reading for Understanding." He headed SLU's English department for 15 years and the Honors Program for a decade.

Although Father McNamee had many accomplishments in the field of English, he never gave up his original interest: art and art history. Father McNamee became a recognized scholar of the Renaissance period and Flemish art. To further his expertise in these areas, he received grants from the American Philosophical Society, the National Endowment for the Arts and the Melon Fund. He also held a yearlong Fulbright Research Fellowship in Belgium, where he developed his noted book, "Vested Angels: Eucharistic Allusions in Early Netherlandish Paintings."

He also didn't lose sight of his dream to establish art and art history as academic offerings at SLU. He became the first person to introduce an art course at a Jesuit institution. He also helped found SLU's flourishing art history program. To recognize his influence, SLU's department of fine and performing arts hands out the annual Maurice B. McNamee, S.J., Award to a student for outstanding achievement in art history.

In 2006, Father McNamee finally earned his Ph.D. in art when the University conferred upon him an honorary doctor of fine arts during the May commencement.

Father McNamee retired from full-time teaching in 1977 to serve as executive director of Cupples House. In 1995, he became director emeritus but remained involved with the museum, including the annual "Lighting of the Cupples House Christmas Tree" event.

Father McNamee's influence wasn't limited to the SLU campus. He helped oversee the installation of the last mosaics at another of St. Louis' architectural treasures - the Cathedral Basilica of St. Louis. He also served on the board of Sheldon Concert Hall, where several windows are named in his honor. At the time of his death, he was working on two books: one about stained glass windows in St. Louis and another about Jesuit Baroque churches.

Mary Bruemmer, a longtime SLU staff member, who served as dean of women and dean of student affairs, said Father McNamee wanted to make the city as beautiful as possible.

"It was his love for art and art history that drove him to share that love with everyone he came into contact with," Bruemmer said. "Because of his reputation for Cupples House, people in the community got to know what a resource he was - what a resource of information and tradition for the city."