The 2017 auction sale of a purported Leonardo da Vinci painting prompts a consideration of the value systems of art, religion, and healthcare. Whose lives, experiences and stories are acknowledged and valued, in what contexts, and by whom? 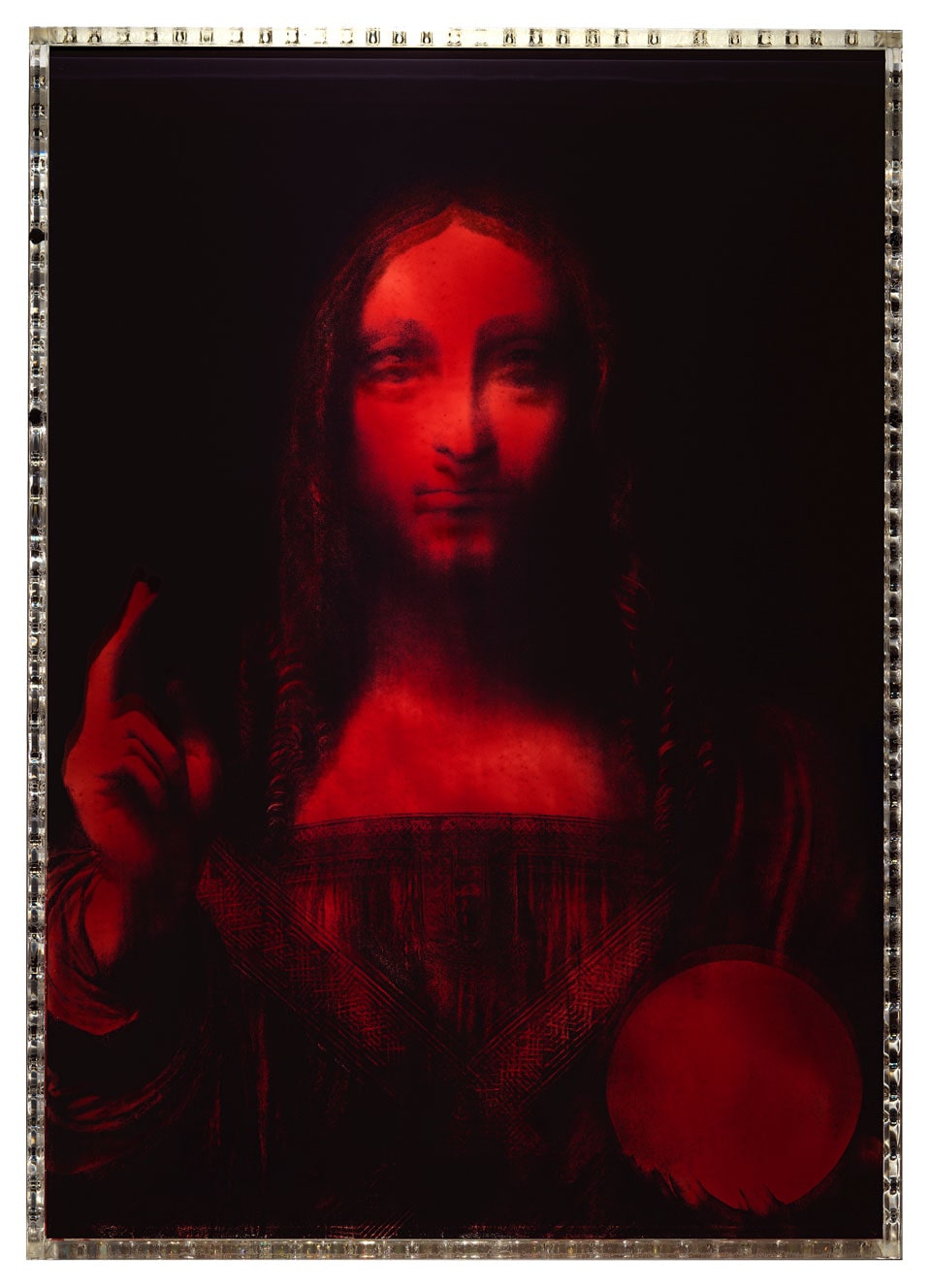 Jordan Eagles, “Vinci,” 2018. Grayscale image of “Salvator Mundi” printed on plexiglass, blood of an HIV+ undetectable long-term survivor and activist, and UV resin. 26.75 x 19 x 3 in. Courtesy of the artist.

MOCRA will be closed Wednesday, Nov. 23 – Sunday, Nov. 27, for the Thanksgiving holiday.

Jordan Eagles is the master of a most unlikely medium: blood. His signature preservation technique permanently retains the organic material’s natural colors, patterns, and textures. In recent years, he has produced works made with donated human blood procured from the LGBTQI+ communities. In doing so, he draws attention to what he argues is a stigmatizing, discriminatory policy maintained by the U.S. government that effectively bans blood donations from gay and bisexual men.

MOCRA is pleased to present a recent body of Eagles’ work that puts the value systems of art, religion, and healthcare into dynamic conversation.

The works in “VIRAL\VALUE” are equal parts startling and subtle, steeped in scrupulous attention to religious and political discourses around health. They function as ethical and theological inquiries into the types of blood, bodies, and love that we value and venerate.
—Dr. Aaron Rosen

Pandemics expose our bodies’ vulnerabilities, as well as our social and moral frailties. Consider AIDS and COVID-19: in both cases, an initial lack of scientific data combined with a viral spread of misinformation to create a sense of panic and polarization. Decisions about research, prevention, and treatment, and spending are never neutral. Bias and discrimination can easily color and distort discourses, with devastating and long-lasting effects on both individuals and communities. Determining value—material, societal, or moral—is fraught with the risk of undervaluing what is truly important.

In its own way, the art world struggles with questions of malpractice and distorted values, with works of art fetching staggering prices. On November 15, 2017, a painting attributed to Renaissance master Leonardo da Vinci (some experts dispute this claim) sold for $450.3 million at Christie’s New York, making it the most expensive artwork in history.

The painting features a close-up portrait of Jesus Christ as Salvator Mundi, “Savior of the World.” The works in “VIRAL\VALUE” bring together this image with blood from an HIV+ undetectable long-term survivor and activist. The central work, “Jesus, Christie’s,” incorporates an original Christie’s auction catalogue refashioned as a receptacle for blood collection tubes.

. . . rather than representing the redemptive blood of Christ, [the donated blood] communicates the exclusion, fear, and ostracism that HIV+ survivors experience. This unsettling and provocative artwork, therefore, not only criticizes the excessive wealth brought to light at the Christie’s auction but uses the universal motif of blood to contrast themes of religious salvation and social exclusion.
—Dr. Joanne Allen, art historian

Through his reworkings of “Salvator Mundi,” Jordan Eagles prompts us to listen broadly and attentively to the experiences of others. What we learn might cause us to reflect on our personal and collective values. Ultimately, we must face the challenging question of how closely our own actions, and the policies and spending of our society, align with the values we profess.

Art that Speaks Up

Stories are contagious and transmissible, from the shared myths and histories that bind communities to intentional misinformation that demonizes vulnerable populations. The works in “VIRAL\VALUE” demonstrate a powerful counternarrative: people who are stigmatized can assert their own worth, often by reclaiming the very images and symbols used to exclude or castigate them.

“Vinci (Donor Portrait),” a poster collaboration between Eagles and What Would an HIV Doula Do? (WWHIVDD), a community of people joined in response to the ongoing AIDS Crisis. One side of the poster features a a photo of the work “Vinci” taken by and reflecting the activist whose blood is incorporated into the artwork. The other side includes a text by writer, poet and musician Bryn Kelly, as well as two questions posed by WWHIVDD: What is Viral? What is Value?

The poster is paired with a projected image titled “Vinci (Illuminations),” and all visitors to the exhibition are invited to take a poster to display, share, and stimulate conversations.

Special thanks to Theodore Kerr of What Would an HIV Doula Do? for invaluable assistance in developing related programming.

Jordan Eagles (b. 1977) has been exploring the aesthetics and ethics of blood as an artistic medium since the late 1990s. Eagles' works are held in numerous private and public collections including the Everson Museum of Art, Peabody Essex Museum, Princeton University Art Museum, The Rose Art Museum, University of Michigan Museum of Art, Wellcome Collection, The Henry Luce III Center for the Arts & Religion, and MOCRA. Recent exhibitions, installations, and public programs include The Andy Warhol Museum (Pittsburgh, PA), Leslie-Lohman Museum of Art (New York, NY), Museum of the City of New York, Birmingham Civil Rights Institute (Alabama), The High Line (New York, NY) and Hammer Museum (Los Angeles, CA). Eagles has collaborated with the NYC Department of Health and Mental Hygiene on NYC Blood Sure and—in partnership with GMHC and FCB Health—is a co-founder of Blood Equality. Eagles lives and works in New York City.