MOCRA presents three new collage-paintings by an acclaimed artist who works at the intersection of language and fine art. 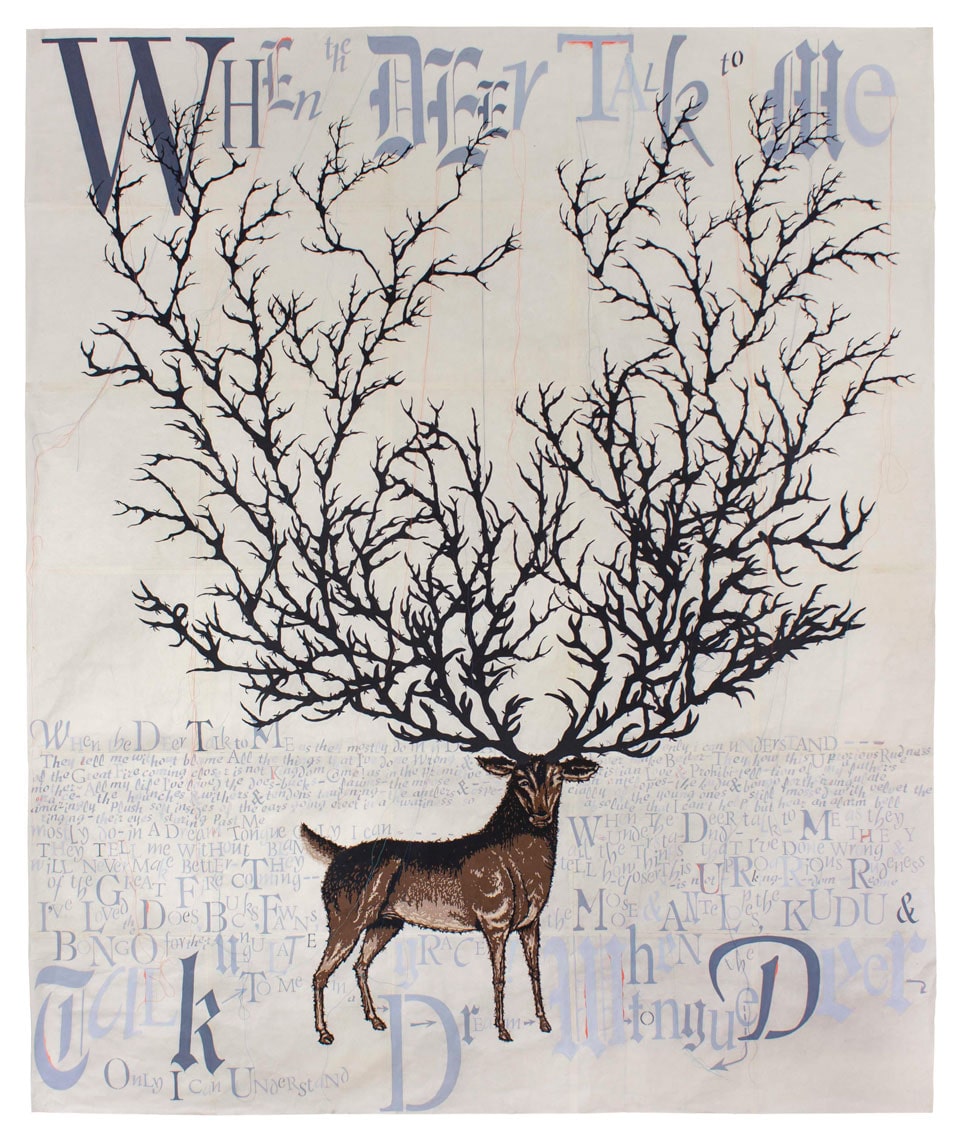 Lesley Dill, “When the Deer Talk to Me,” 2022. Hand-cut paper, acrylic paint, and thread on mulberry paper. Courtesy of Lesley Dill and the Nohra Haime Gallery.

MOCRA is pleased to present three new collage-paintings by Lesley Dill, an American artist who works at the intersection of language and fine art in sculpture, printmaking, installation and performance, exploring the power of words to cloak and reveal the psyche. Dill transforms the emotions of the writings of Emily Dickinson, Salvador Espriu, Tom Sleigh, Franz Kafka, and Rainer Maria Rilke, among others, into works of paper, wire, horsehair, foil, bronze and music—works that awaken the viewer to the physical intimacy and power of language itself.

The three works on display are composed of Asian mulberry paper, joined as squares using a glue fusion technique. The imagery and text are made from a combination of acrylic paint and intricately hand-cut paper imagery, subtly webbed by Dill’s trademark addition of delicate hanging threads. Dill dissolves and recombines texts, breaking phrases into words and words into letters set in variegated fonts. The disrupted syntax challenges our accustomed linearity of reading and thinking, and opens up new possibilities of meaning and understanding.

More About the Works in the Exhibition

“Blazing Tree” reflects Lesley Dill’s interest in the beliefs, practices, and art of the Shakers, a utopian Christian sect that flourished in the nineteenth century. In 2019, Dill participated as a Fellow in a multidisciplinary exploration of the Shakers convened by Fordham University and the Shaker Museum in Mount Lebanon, NY, and sponsored by the Henry Luce Foundation.

Sister Hannah Cohoon (1788–1864) was a member of Hancock Shaker Village during a time of revival known as the Era of Manifestations. Cohoon produced “gift drawings” based on messages received during visionary experiences. This work incorporates imagery and text from an 1845 gift drawing titled “The Tree Of Life Or Blazing Tree.”

According to Cohoon, “This tree grows in the Spirit Land,” where it thrives in a wondrous, living blaze that engulfs but does not consume it. Cohoon encounters the divine mediated by nature, ineluctably drawn yet hesitant to approach.

Cohoon is perhaps made present to us through a dress that repeats the tree motif; Dill has observed, “As clothing cloaks or reveals, so does language, which can selectively reveal or obscure.”

When the Deer Talk to Me

Other critically recognized collections include “The Dreamhouse,” “The Chain,” and “Station Zed.” In 2018 a book of prose collecting his essays on refugees in the Middle East and Africa, “The Land Between Two Rivers: Writing In An Age Of Refugees,” was published simultaneously by Graywolf Press as a companion piece to “House of Fact, House of Ruin.” He has also published a previous book of essays, “Interview With a Ghost,” and a translation of Euripides' “Herakles.” Sleigh’s poems and prose appear in The New Yorker, Virginia Quarterly Review, Poetry, American Poetry Review, Yale Review, Threepenny, The Village Voice, and other literary magazines, as well as various anthologies.  He has received the Shelley Prize from the Poetry Society of America, a Guggenheim grant, and two National Endowment for the Arts grants, among many other honors.

Sleigh is a Distinguished Professor in the MFA Program at Hunter College and lives in Brooklyn. During the last decade, he has also worked as a journalist in Syria, Lebanon, Somalia, Kenya, Iraq, and Libya.

This collage-painting by Lesley Dill incorporates passages from an unpublished poem by Sleigh titled “Deer Fleeing a Forest Fire.” A stag stands alert in a landscape of Sleigh’s words, seemingly oblivious to the weight of beauty growing as a forest from its head. Rootedness and energetic emanation are juxtaposed, reflecting the poet’s fascination with an “ungulate grace” that seems to reveal to him the deeper currents of his life.

Other evocative phrases that emerge include “When the deer talk to me as they mostly do / in a dream tongue only I can understand / they tell me without blame all the things that / I’ve done wrong and will never make better,” and “the amazingly plush soft insides of the ears going erect in a wariness so absolute that I can’t help but hear an alarm bell ringing.”

Man Carrying the Wilderness  Far Away on the Frontier

In this work, a man stands peering out placidly, his clothing evoking tree bark or rustling feathers, while multiple deer leap from his arms. The imagery is paired with passages from a poem by Tom Sleigh titled, “Portents,” which is part 5 of a 6-poem sequence entitled “The Games,” collected in “Army Cats,” published by Graywolf Press in 2011. Sleigh discusses “The Games” in a 2013 interview with the online journal Blackbird.

Sleigh’s words hint of mythic lands. We might ask ourselves where the frontiers lie in our own lives, what wildernesses we carry within, and if those wildernesses can really be contained.

“Dream World of the Forest” is a follow-up to Dill’s series “Wilderness: Light Sizzles Around Me,” which amplifies voices of the North American past as they wrestle with divinity, deviltry, and freedom, including Mother Ann Lee, Black Hawk, Sojourner Truth, John Brown, Emily Dickinson, Horace Pippin and Sister Gertrude Morgan.

Dill is also fascinated by the wilderness as a simultaneously physical and psychic landscape. She spent much of her childhood following pathways in the shadowed Adirondack and Maine woods, on trails cut by deer, bear, rabbits and porcupine. These memories and her ongoing exploration of transcendent experiences are joined in these new works, which beckon us into untamed territory inhabited by prophetic and poetic texts and visionary imagery. Venturing onto these unmarked paths entails risk, but may lead to insight, wisdom, and transformation.

“Lesley Dill: Dream World of the Forest” is presented at MOCRA courtesy of Lesley Dill and the Nohra Haime Gallery.

Lesley Dill (b. 1950) has had over one hundred solo exhibitions. Her artworks are in the collections of many major museums, including the Metropolitan Museum of Art, the Museum of Modern Art New York, and the Whitney Museum of American Art. In 2017 she was named a fellow of The John Simon Guggenheim Foundation and is a Joan Mitchell Foundation Creating A Living Legacy artist and grant recipient. Her opera, “Divide Light,” based on the poems of Emily Dickinson, was performed in San Jose in 2008. In 2018 the opera was re-staged in New York City and captured in an award-winning film by Ed Robbins. Dill was the recipient of the Emily Dickinson Museum’s 2019 ‘Tell it Slant’ Award. Dill’s exhibition “Wilderness: Light Sizzles Around Me,” organized by the Figge Art Museum, is currently traveling to 7 venues through Winter of 2023.

Also on display:
“This Road Is the Heart Opening: Selections from the MOCRA Collection”

Learn More About “This Road Is the Heart Opening”