A major sculptural work is on display at MOCRA for the first time after an extensive conservation project. 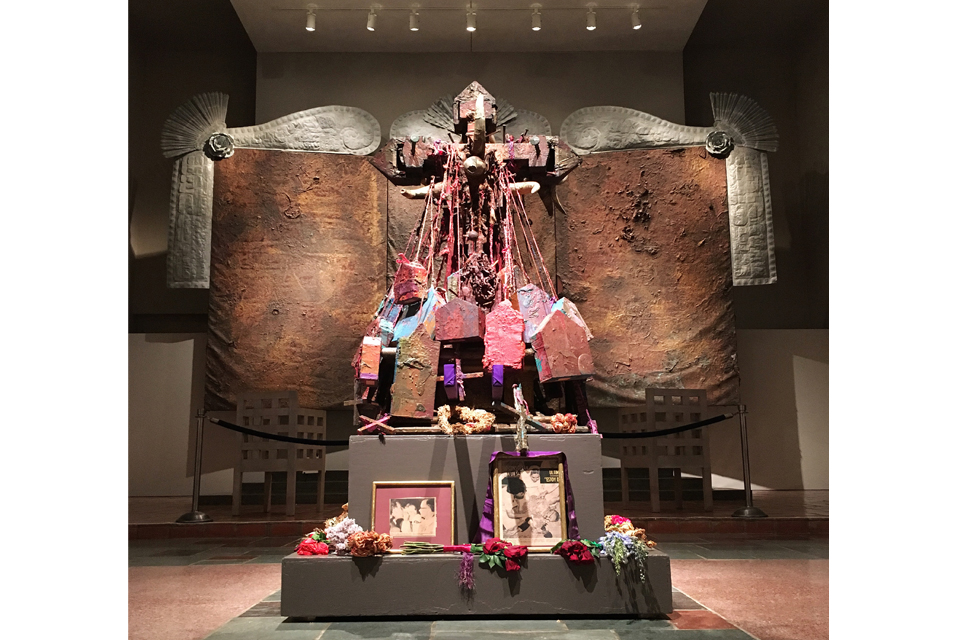 In 1980, while living in Mexico City, artist Michael Tracy chanced upon a copy of “Alarma!” — a Mexican tabloid notorious for publishing graphic photos of crime scenes and traffic accidents — left on the seat of a bus. Tracy was riveted by a picture of Oscar Romero, the Roman Catholic Archbishop of El Salvador, being attended to by several women moments after he was shot while saying Mass.

Tracy found this image so arresting that he began to read more about Romero and the context of conflict and injustice in Central America, especially the involvement of the U.S. government and military. In response, he created the “Cruz to Bishop Oscar Romero,” one of a series of large processional crosses he made between 1977 and 1983.

The Romero Cross has been seen worldwide in prominent venues including the 1982 Venice Biennale, P.S. 1 (New York), the Menil Collection (Houston), and the Raab Gallery (Berlin). The Romero Cross became part of MOCRA’s permanent collection in 2016.

Conservation of the Romero Cross, including stabilization and cleaning, was required prior to putting the artwork on public display. This resulted in a seven-month project called “Visible Conservation,” which gave the public insight into a part of museum work that usually takes place behind the scenes.

Watch a time-lapse video of the day-long installation process.

Who was Oscar Romero?

Oscar Arnulfo Romero y Galdamez (1917–1980) is revered around the world as a major champion of social justice, and his words and witness continue to resonate today. As a Roman Catholic bishop in El Salvador in the late 1970s, when the country was convulsed with social and political turmoil, Romero denounced the perpetrators of violence, often by name, and demanded justice for victims.

Considered a prophet by the oppressed, Romero drew the ire of those in power and was frequently the target of death threats. On March 24, 1980, Romero was shot and killed by a sniper’s bullet while he said Mass in a hospital chapel. Since his death, Romero has been celebrated by some and vilified by others, even within the Catholic Church. However, on October 14, 2018, Oscar Romero was canonized as a saint of the Catholic Church.

Michael Tracy (b. 1943) first achieved international recognition in the 1980s, exhibiting in the 1982 Venice Biennale and in London’s Tate Gallery’s New Art exhibition in 1983. He has had solo exhibitions at P.S. 1 (New York), the Menil Collection (Houston), the Mattress Factory (Pittsburgh) and the Centro Cultural de Arte Contemporáneo (Mexico City). His work is found in public collections including the Metropolitan Museum of Art (New York), the San Francisco Museum of Modern Art, the Dallas Museum of Art, the Museum of Fine Art, Houston, the High Museum (Atlanta) and the Menil Collection.

Michael Tracy’s life and career are bound up with the state of Texas. After receiving his MFA from the University of Texas, Tracy moved to Galveston in the early 1970s. In 1978 he settled in San Ygnacio, a small historic border town on the Rio Grande, where he has resided ever since. He founded The River Pierce Foundation, which works to identify, conserve, and advocate for the cultural heritage of San Ygnacio and the borderlands in the Lower Rio Grande Valley. The foundation’s work includes artistic, educational, and oral history programs; environmental activism; and a major program of restoration for the historic buildings of San Ygnacio.

Tracy lived in Mexico for a number of years prior to settling in San Ygnacio. His immersion in a Latin American culture deeply intertwined with religion, combined with his own Catholic upbringing and his concern for civil rights, border issues, and oppression, results in highly expressive works laden with religious symbolism and iconography. His body of work includes painting, sculpture, photography, film and performance. Regardless of the medium, a powerful sense of beauty and brutality, sensuality and ritual, religion and oppression are ever present.

The Romero Cross is on display in MOCRA’s Nave Gallery.