Saint Louis University’s Museum of Contemporary Religious Art (MOCRA) has always welcomed visitors to contemplate works both beautiful and sacred. Now, visitors have a rare opportunity to see one of those works come to life, as a conservation team restores a mixed media sculpture by an important American artist right in the gallery’s heart. The conservation in fact, is an exhibit itself, Visible Conservation. 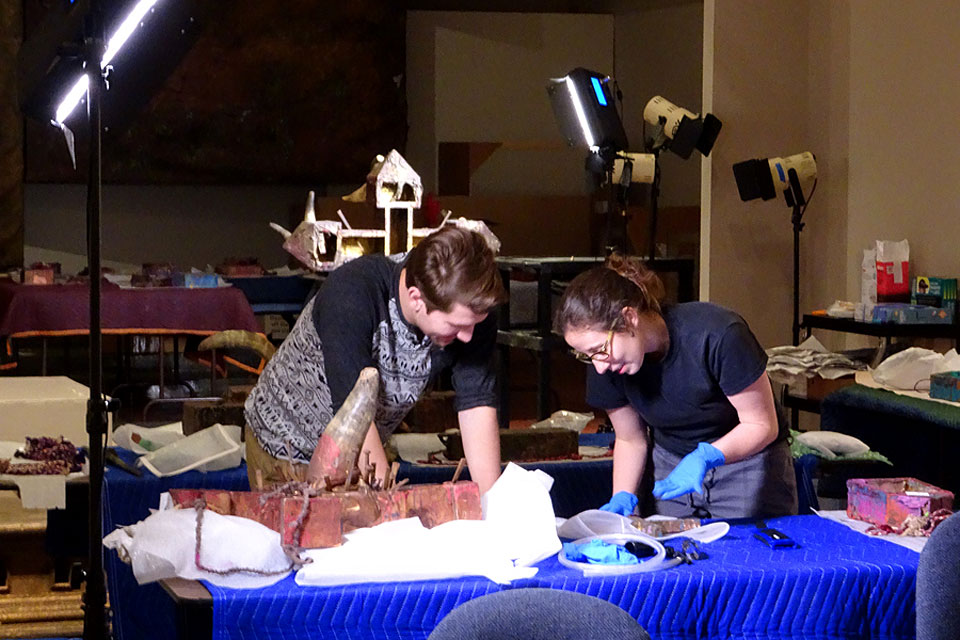 Visible Conservation allows visitors to SLU's Museum of Contemporary Religious Art (MOCRA) to watch the conservation of a masterpiece from the museum's collection unfold in real time. Submitted photo

The exhibit features live conservation work as well as an “Ask a Conservator” interactive wall and social media conversation that allows art lovers to engage with the museum staff and conservation team to learn more about the piece and the process to conserve it for future visitors.

“For us, this is far more complex than anything we’ve ever dealt with,” David Brinker, MOCRA’s assistant director explained. “So, the public can learn along with us.”

The preservation of the work carries forward SLU’s mission, Brinker and MOCRA director Terrence Dempsey, S.J., said, because it highlights the role both University and museum play in preserving the past.

“For us as a museum, it reinforces what a museum is about,” Brinker said, “that we take on the responsibility of safeguarding and maintaining these objects. We make the objects available for audiences right now and maintain them for the enjoyment and education of future generations.”

With a work like Tracy’s however, University and outside expertise was necessary to preserve the artist’s unique vision. According to Dempsey, Cruz to Bishop Oscar Romero, Martyr of El Salvador is one Tracy’s most globally-seen works. Before coming to MOCRA in 2016, the piece was shown at the Venice Biennale in 1982 and exhibited in Berlin as well. The piece was also show in Los Angeles, New York City, Washington, D.C., and Houston before ultimately becoming part of the MOCRA collection. 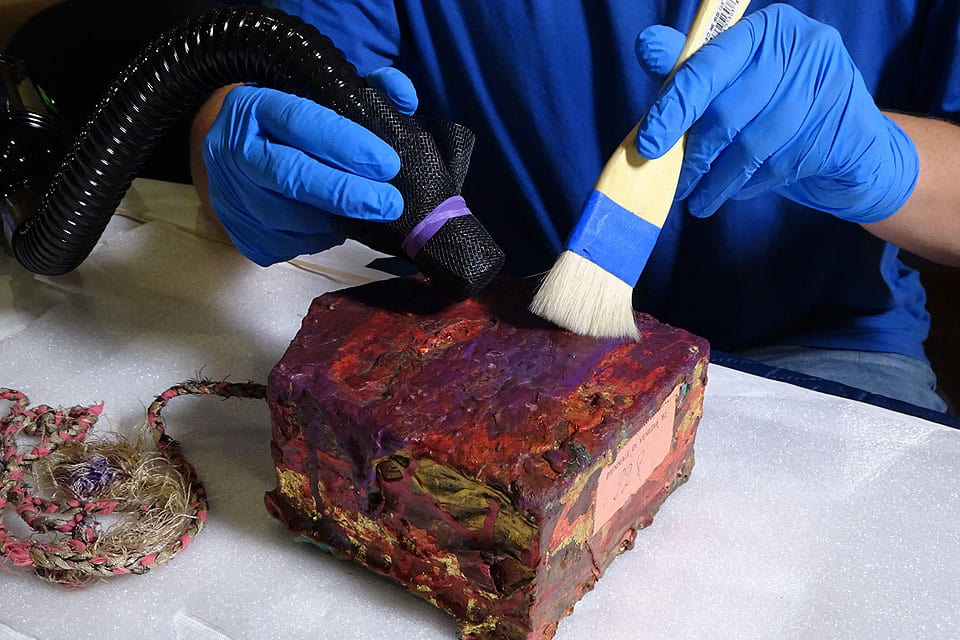 Support from the Artist

MOCRA has had a longstanding relationship with Tracy. The artist lent both his support and his work to the museum in its early years. Dempsey explained that Tracy's support provided a boost for other artists to show their work at MOCRA.

“Because he came on board and lent us one of his important works, the Triptych that many people have come to identify with MOCRA, other artists felt it was safe to come on board,” Dempsey said, noting that Tracy was drawn to the way MOCRA approaches displaying contemporary sacred art and works that consider religious and spiritual themes. “People recognized that this was a sacred space. A modern sacred space.”

For us as a museum, it reinforces what a museum is about, that we take on the responsibility of safeguarding and maintaining these objects. We make the objects available for audiences right now and maintain them for the enjoyment and education of future generations.”

The piece also invites a viewer to meditate on social justice themes, Dempsey explained, and on the message of justice found in the Gospels as well as in the story of Oscar Romero himself. A bishop in El Salvador, Romero was an outspoken advocate for the poor who was assassinated as he celebrated Mass in 1980.

“Romero’s life and death heightened Americans’ awareness of the relationship between Latin America and the United States and Catholicism,” Dempsey said. Tracy’s artwork, he continued, has political implications as well as religious meaning. “The 36 milagros hung from the cross of Oscar Romero might represent private prayers or perhaps the hopes of a nation.”

While the piece’s politics are complicated, its actual construction proved challenging for the MOCRA staff and conservator Katherine Langdon. After MOCRA purchased Cruz to Bishop Oscar Romero, Brinker traveled to the work’s location in Houston where he met a crew from the artist’s studio to disassemble the work’s more than 45 components and prepare it for the journey to its permanent home in St. Louis. The team noted that the 35-year-old work needed some attention.

“It’s an interesting study in conservation problems,” said Langdon, an independent art conservator who consults with museums like MOCRA. Langdon developed the conservation plan for the Tracy Cruz and has worked with conservation techs in the museum’s gallery on the SLU campus since August. The conservation is the largest projects she has overseen. “It’s been a learning experience with everyone involved.”

Unlike a traditional oil painting or bronze sculpture, Tracy’s piece combines dried flowers, metal, bulls’ horns, paper and wood along with other materials. After years on display, the piece had suffered minor damage and needed a thorough cleaning to rid it of dust. Because it is made from so many different materials, determining the best techniques and approaches to use made the Cruz an especially challenging project. 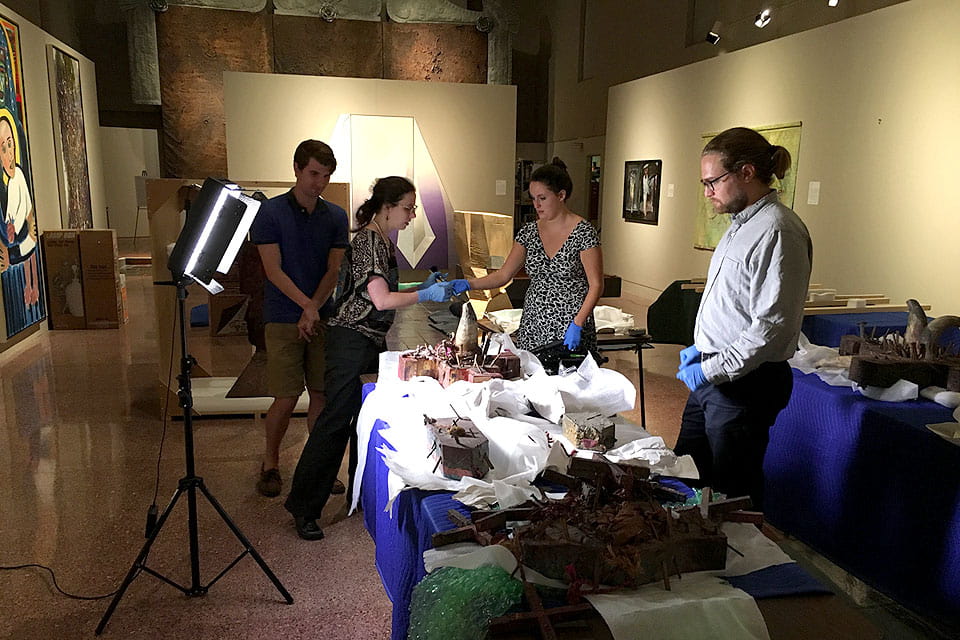 A team of conservation technicians, led by conservator Katherine Langdon, has been at work on the project since August 2017. Submitted photo

Because MOCRA is a small, intimate museum space, the only practical option was for the conservation work to take place in the gallery. The unexpected benefit was that the museum staff and the public could see Tracy’s work conserved before their eyes.

For Langdon, the ability to work in public and to engage with visitors through Visible Conservation’s dialogue components has been a special experience that also allows her to advance conservation as an important element in the museum world.

“In conservation advocacy, you want to be sure the public is aware of the point of conservation,” Langdon explained. “We try to keep the art pieces around as long as possible for future generations, first by putting them in a stable environment but also, when repairs are necessary, by being respectful of their history of use, the artist's intent and the original materials.” As a result, while Tracy’s piece will endure for years to come after the project is finished, it won’t look like it did on the day the artist put his finishing touch on the work. According to Brinker and Dempsey, that isn’t what Tracy would want for his Cruz anyway.

“Our aim is not to get the piece the way it looked the day it left the artist’s studio,” Brinker said, “but to let its full power shine through.”

Visible Conservation is ongoing and the piece is slated to be reassembled in early March.

To learn more about the conservation project or to ask a question, join the Visible Conservation conversation on Facebook, Twitter or Instagram. To learn more about MOCRA, visit the museum. Brinker, Dempsey and conservator Langdon also discussed the project and MOCRA on STL-TV’s “City Corner” in October 2017.

Saint Louis University’s Museum of Contemporary Religious Art (MOCRA) is the world’s first interfaith museum of contemporary religious and spiritual art. Officially opened in 1993, MOCRA is dedicated to the ongoing dialogue between contemporary artists and the world’s faith traditions. Located in a spacious chapel that was used for over 35 years by Jesuits studying philosophy at Saint Louis University, MOCRA offers a unique, meditative setting for the display of its permanent collection and changing exhibitions. MOCRA’s exhibitions demonstrate the range of contemporary religious and spiritual artistic expression, presenting the work of artists of regional, national and international stature. MOCRA also produces MOCRA Voices, a series of conversations with thinkers and practitioners at the intersection of contemporary art, religion, and spirituality. MOCRA Voices includes audio and video podcasts available for streaming and download, and public lectures delivered at MOCRA. Learn more by visiting the museum.