In 1818, Catholic Bishop Louis William DuBourg founded Saint Louis University, the first institution of higher learning west of the Mississippi River. Less than a decade later, the Society of Jesus assumed control of the University. Ever since, the Catholic and Jesuit traditions have guided the University to serve a higher purpose and to seek the greater good.

Making the World a Better Place

Saint Louis University follows the Jesuit traditions of educating the whole person — mind, body and spirit — and preparing students to make the world a better place.

At SLU, we encourage asking hard questions and looking beyond easy answers. What does ethical leadership look like in the 21st century? How can we help improve the lives of the incarcerated or underprivileged children in St. Louis? How do we work to end systemic racial inequity?

How Does Jesuit Education Work?

SLU doesn’t just talk the talk — we walk the walk. Our undergraduates are encouraged to take a broad range of classes, and every major is founded upon a core curriculum that includes theology and philosophy. But whatever the topic, students learn to defend ideas and to improve upon them, developing the skills to think clearly, argue persuasively and express themselves coherently.

Inspired by the Jesuit call to be men and women for others, at SLU ideas become actions, and serving others is a way of life. More than 80 of SLU’s courses directly integrate service into academic content. Outside of the classroom, students, faculty and staff members devote more than 1.6 million hours to community service annually.

In and out of class, on campus and around the globe, SLU students come to see the future as a wondrous opportunity for growth and good works. 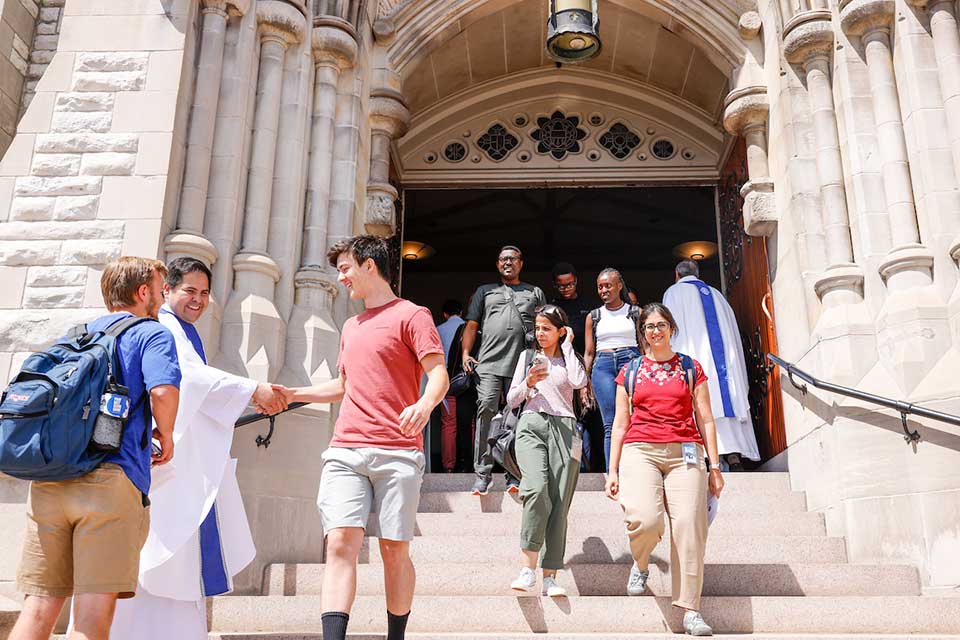 At Saint Louis University, the nearly 500-­year­-old Jesuit tradition inspires everything from the kinds of classes students take to how they spend their free time. But just what does it mean to be “Jesuit”?

FAQ About the Jesuit Tradition

Who are the Jesuits?

The Jesuits are members of the Society of Jesus, a Roman Catholic religious order founded in 1540 by St. Ignatius of Loyola.

Early on, the Jesuits became known for education as they traveled throughout Europe doing missionary work and starting schools and seminaries. Less than two decades after they were founded, Jesuits had established 74 colleges on three continents.

Today, there are close to 200 Jesuit institutions of higher learning around the world, including Saint Louis University. The Society of Jesus is the largest male religious order in the Catholic Church, with almost 17,000 priests and brothers worldwide. They are teachers as well as pastors, lawyers and more. In fact, Pope Francis is a Jesuit priest.

Nearly 30 Jesuit priests and brothers live, teach and minister at Saint Louis University. In addition, Bellarmine House of Studies, one of only three houses of Jesuit First Studies in the country, is an on­-campus residential community for 25 scholastics in training. Jesuit Hall is home to priests who work on campus, as well as some who have retired from teaching or ministry.

Learn More About the Jesuit Vocations

What is Jesuit Education Known for?

Jesuit education entails caring for the whole person — mind, body and spirit — and encouraging students to become well-­rounded people who contribute to the greater good.

Inspired by the Jesuit practice of “finding God in all things,” students take a broad range of study, which is grounded in the theological and philosophical foundations of the Catholic intellectual tradition.

Then there’s the idea of “the magis” (more), which leads to excellence in all pursuits. This ties into the Jesuit legacy of academic rigor, which requires students to go deeper, think critically and solve problems creatively for the glory of God and the service of humanity.

Finally, Jesuit education prepares students to become “men and women for and with others,” to make the world a better place by seeking justice and serving the most vulnerable among us.

Do SLU Students Have to Take Religion Classes?

All undergraduates take a course that is unique to SLU called “Theological Foundations.” The course is an exploration of the Judeo­-Christian religious traditions that have contributed to shaping cultures throughout the world for more than 3,000 years. Connections are also made in this course to other major religious traditions alive and well today.

Do SLU Students Have to Attend Mass?

No. While there is ample opportunity for Catholic students to go to Mass, other students are welcome but not obligated to join them. The Department of Campus Ministry also works with affiliate ministers of many faith traditions who accompany students on their spiritual journeys, on and off campus.

Who Was St. Ignatius?

Inigo de Loyola (1491-­1556) was the youngest child of a noble Basque family loyal to the Spanish crown. He spent his early days not as a priest but as a courtier and a soldier. During the battle of Pamplona in 1521, his leg was seriously wounded by a cannonball. While he recuperated at his family’s home, he reconsidered his way of life. A spiritual and religious conversion followed, and he decided to lay aside his sword of war and take up what he called the "sword of Christ." 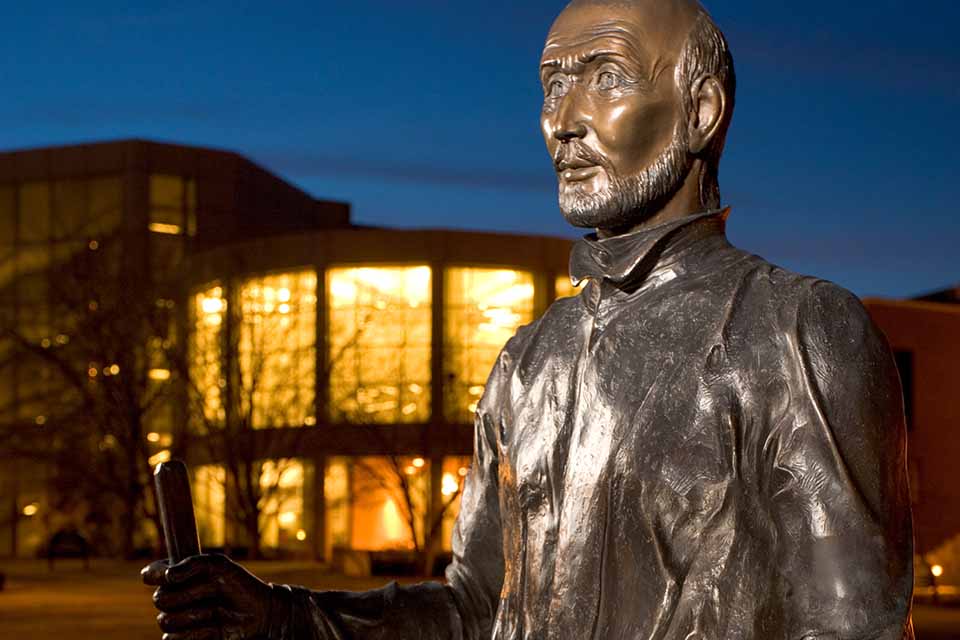 After his convalescence, Ignatius began his new life as a pilgrim. He stopped in a town called Manresa, intending to stay for a few days. Instead, he stayed for 10 months, spending hours each day in prayer. This led to the creation of what is now known as the “Spiritual Exercises.” Also during this time, Ignatius had a vision that led him to seek “to find God in all things.”

After his religious conversion, to be of greater assistance to others, he went back to school, studying at a variety of different universities. While at the University of Paris, he formed a circle of friends who decided to dedicate themselves to the greater glory of God and “helping souls.” They placed themselves at the service of the Pope, who would send them throughout the world, wherever they were needed most. Everywhere the Jesuits went, their mission remained the same: to seek the greater glory of God and the good of humanity.

St. Ignatius was canonized by Pope Gregory XV on March 12, 1622. His feast day is celebrated on July 31, the day he died.

Welcoming All Faiths and Religions

People from every religious identity, practice or tradition are welcome at SLU. Student groups such as the Interfaith Alliance and campus ministry’s affiliate minister program encourage the spirituality of all members of the SLU community. 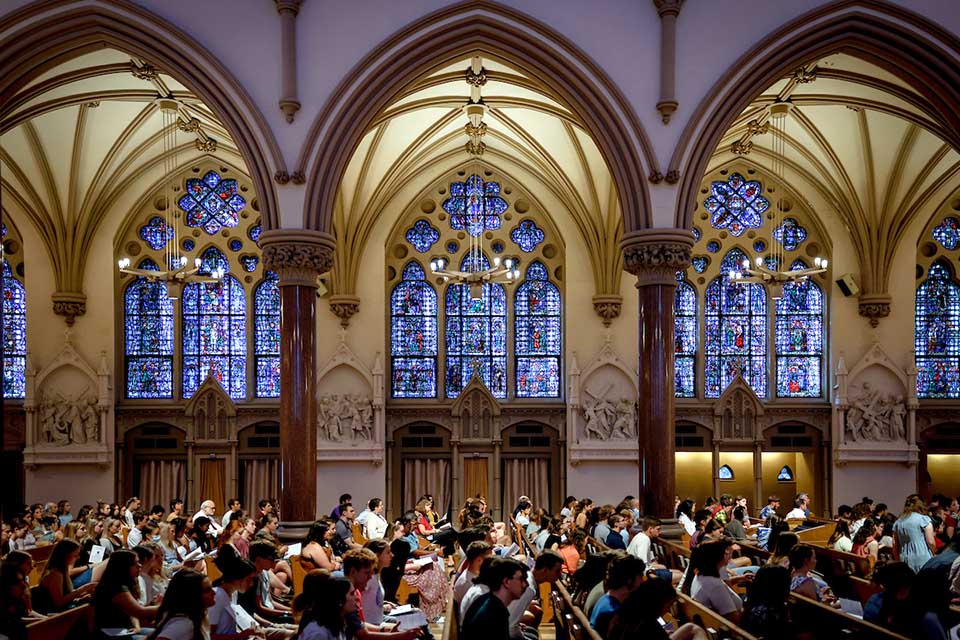 Guided by the Roman Catholic Church and the Society of Jesus, Saint Louis University encourages all students, faculty and staff to discover truth that is accessible by way of both faith and reason.

Here, we’re committed to Catholic education at all levels. We offer ample opportunities to worship, participate in the sacraments and grow in faith. The Sunday Evening Student Mass at St. Francis Xavier College Church consistently draws more than 800 students each week.

Mass is also celebrated daily at St. Francis Xavier College Church and throughout the week in residence hall chapels. SLU’s Department of Campus Ministry sponsors retreats, service opportunities and mission trips, as well as groups devoted to faith­-sharing and prayer.

SLU is home to Jesuits at every stage. During the academic year, you can find our  Jesuit Scholastics, young men studying for the priesthood, sharing coffee and fellowship with the community starting at 8:30 a.m. each Friday at the clock tower or in various locations around campus.  See what's brewing.

Jesuits teach and minister at SLU

Jesuit Glossary
Ad Majorem Dei Gloriam (AMDG)
Often abbreviated "AMDG," this Latin phrase translates to “For the Greater Glory of God” and means that even the smallest gesture can be done to glorify God.
Cura Personalis

This Latin term means “care for the individual person” and describes respect for the dignity of each person as a child of God. It leads to the teacher involving the student in the process of learning and expressing personal care for each individual.

Peter­-Hans Kolvenbach, S.J., a recent superior general of the Society of Jesus, said that Jesuit schools should “educate the whole person of solidarity for the real world.” This translates to learning through contact, not just concepts: first­-hand experience, service­-learning, outreach.

Finding God in All Things

Those at Jesuit institutions should seek to find God in all things — divine revelation, the natural world, human experience and every academic discipline that explores these orders of knowledge. This active discernment can lead to spiritual development made possible by the liberal arts ideal of studying a broad spectrum of topics to have a sense of the unity of knowledge.

This refers to aspects of the spirituality initiated by Ignatius and the Jesuits that are applicable for all people.

Latin for “more,” this is the challenge to strive for excellence.

Men and Women for and with Others

Coined by Pedro Arrupe, S.J., who’s considered the founder of the modern, post­-Vatican II Society of Jesus, this phrase speaks to the heart of the Jesuit tradition: We must become “people who cannot even conceive of love of God which does not include love for the least of their neighbors.” A Jesuit education encourages students to integrate contemplation and action, so they become men and women with well­-developed minds, generous hearts and reflective souls — “agents of change” who work to bring about a more just, humane world.

— Information from “Do You Speak Ignatian?” by George W. Traub, S.J.