Multi-disciplinary artist Maria Magdalena Campos-Pons is hailed as a leading artist of the Afro-Cuban diaspora, with work encompassing installation art, performative photography, painting and cultural activism. On March 2, 2013, she was at Saint Louis University to deliver The Kristen Peterson Distinguished Lecture in Art and Art History. Her talk, titled “Rituals and Spirituality in the Performative Photographic Work of Maria Magdalena Campos-Pons,” concerned her exploration of themes of separation, fragmentation, and memory through multiple artistic disciplines.

The day before her talk, she sat down with MOCRA Director Terrence Dempsey, S.J., and Dr. Olubukola Gbadegesin, Assistant Professor of Art History and African-American Studies at Saint Louis University. You can hear their conversation here.

Note: The audio quality is somewhat impaired from the 2-minute mark to the 7-minute mark. In her ritual invocation, Campos-Pons speaks the name of a relative, followed by, “Are you with me?” 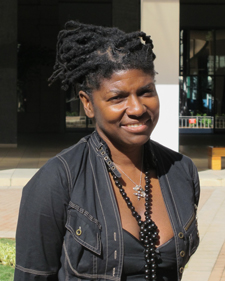 Maria Magdalena Campos-Pons was born in Matanzas, Cuba, and trained at the National School of Art and the Superior Institute of Art (ISA) in Havana. In the 1980s she studied at the Massachusetts College of Art in Boston. She has lived and worked in Boston since 1991 and has exhibited globally in venues such as the Johannesburg Biennial, the Dak’Art Biennial in Dakar, Senegal, the Guangzhou Triennial in China, and the Venice Biennale. In 2006 the Indianapolis Museum of Art presented a 20-year retrospective of Campos-Pons' work. Her art is found in important public and private collections, including the Museum of Modern Art, The Whitney Museum of American Art, the Polaroid Collection, the Museum of Fine Arts (Boston), and The Victoria and Albert Museum, as well as the MOCRA collection. Campos-Pons received Boston’s Woman of Courage Award in 2011 and the Woman of Color Award in 2012. She taught at the School of the Museum of Fine Arts in Boston, and is presently Cornelius Vanderbilt Endowed Chair of Fine Arts at Vanderbilt University.

Campos-Pons works in a variety of media, including photography, painting, sculpture, and performance video. Recurring themes in her work include maintaining ties with the people and land from which she comes, the special character and role of women's discourse in society, and the nature of family communication. Many of her works are autobiographical-some are expressions of absence, loss and dislocation, but they also convey a deep appreciation for the resilience of her unique Afro-Cuban heritage. MOCRA first exhibited work by Campos-Pons in the 2004 exhibition Rito, Espejo y Ojo / Ritual, Mirror and Eye. Since then several of her works have entered MOCRA’s collection.