Thanks to her discerning eye and generous hospitality, Martha Schneider has built a reputation as one of the foremost gallerists specializing in contemporary Latin American photography. But 30 years ago, she had no inkling where her passion for art would lead her.

She spoke with MOCRA Director Terrence Dempsey, SJ, about the origins of Schneider Gallery and how she came to represent world-renowned artists such as Maria Magdalena Campos-Pons, Luis González Palma, and Erika Diettes. They also talk about the highly successful collaborations between the gallery and MOCRA, including 2016's acclaimed exhibition, Erika Diettes: Sudarios. 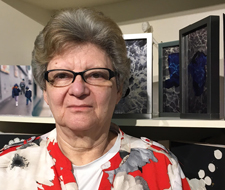 Martha Schneider was born and raised in Argentina, where she studied journalism, art history, and psychology at the University of Buenos Aires. In 1964 she and her husband moved to Chicago. She opened Schneider Gallery in Highland Park in 1985, and originally specialized in ceramics and jewelry. Several years later the gallery moved to Chicago and shifted focus to contemporary photography. Today Schneider Gallery has been in the River North Gallery District for over 30 years, and is among the foremost galleries specializing in Latin American photography. Schneider has served as a juror for numerous photography festivals, including Filter Foto Fest (Chicago) and Foto Fest (Houston).