Colombian artist Erika Diettes (b. 1978) has received international acclaim for a body of work that draws upon her training as both an artist and an anthropologist. In 2011 she set up a studio in the Colombian province of Antioquia, where she interviewed at length and photographed women who had been forced to witness the torture and murder of their loved ones. The resulting twenty photographs, titled “Sudarios” (Spanish for “Shrouds”), are printed on large silk panels and are typically displayed in sacred spaces, suspended at different heights. They attest to the women’s pain, loss and mourning. Yet the works also give evidence to life after horrific events.

In this talk, given at the opening of “Sudarios” at MOCRA on Sept. 25, 2016, Diettes speaks about “Sudarios” in the context of two other projects that address the impact of Colombia's long-running armed conflict: “Río Abajo” and “Relicarios.” She shares stories of the subjects of her work and addresses audience questions about her process and the impact of her work. 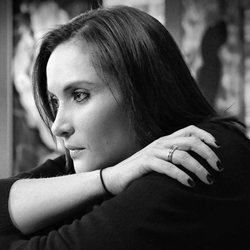 Erika Diettes’ work has been exhibited in unique spaces linked to re-memoration processes developed by the victims’ movements in Colombia, as well as at other venues, including the Museums of Modern Art of Bogotá, Cali, Medellín, and Barranquilla in Colombia; the Museum of Contemporary Art in Santiago de Chile; CENTER in Santa Fe, New Mexico; the Museum of Fine Arts and the Fotofest Biennial in Houston; the Festival de la Luz in Buenos Aires; the Ballarat Foto Biennale in Australia; and the Malta Festival in Poznán, Poland. Her work is part of the permanent collections of the Museo de Antioquia (Colombia) and the Museum of Fine Arts Houston, as well as other important public and private collections in Colombia and the United States. | Photo © Carlos Duque