Howard Fox is well-known in contemporary art circles as a curator and author. MOCRA Director Terrence Dempsey, SJ, speaks with Fox about his approach to curating exhibitions and discerning trends in art-making, as well as the process of writing essays on contemporary art. Along the way they discuss specific artists who engage the religious and spiritual dimensions in their work. 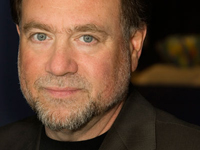 Over the course of a long and notable career, Howard Fox has organized numerous major exhibitions and authored their catalogues. He has also published and lectured widely, often focusing on issues of content and meaning in contemporary art. Fox spent 10 years as a curator with the Hirshhorn Museum and Sculpture Garden in Washington, D.C. In 1985 he became Curator of Contemporary Art at the Los Angeles County Museum of Art. Since leaving LACMA in 2008, Fox continues to curate and write independently.

Among the exhibitions Fox has organized are Avant-Garde in the Eighties (1987), A Primal Spirit: Ten Contemporary Japanese Sculptors (1990), Lari Pittman (1996), and Eleanor Antin (1999). He was a collaborating curator and contributing author for Made in California: Art, Image, and Identity 1900-2000 and for Tim Hawkinson, co-organized by LACMA and the Whitney Museum of American Art. Fox wrote a principal essay for the catalogue accompanying the 2006 exhibition Los Angeles 1955-1985: Birth of an Art Capital, organized by the Centre Georges Pompidou, Paris, and was co-curator of the LACMA exhibition Phantom Sightings: Art after the Chicano Movement.

See discussion of Jim Morphesis at 23:20, below.

Tim Hawkinson (b.1960) is known for creating complex sculptural systems through surprisingly simple means. He draws inspiration for many of his pieces from the re-imagining of his own body, and what it means to make a self-portrait of a new, fictionalized body. Hawkinson has participated in numerous exhibitions in the United States and abroad, including the Venice Biennale (1999); Massachusetts Museum of Contemporary Art (2000); the Power Plant, Toronto (2000); the Whitney Biennial (2002); and the 2003 Corcoran Biennial, Washington, DC.

Watch an interview with Hawkinson on the PBS program Art21.

Hawkinson's work was exhibited at the Whitney Museum of American Art, New York, from February 11 to May 29, 2005, and at the Los Angeles County Museum of Art from June 26 to August 28, 2005. Find a copy of the catalogue near you on WorldCat, or listen to an NPR review of the show:

Fr. Dempsey references the 1985 exhibition Concerning the Spiritual: The Eighties, at the San Francisco Art Institute in 1985. To learn more about the MOCRA exhibition Sanctuaries: Recovering the Holy in Contemporary Art, visit the exhibition website, or listen to this MOCRA Voices episode about the exhibition.

Lita Albuquerque is known internationally for her installation and environmental art, painting, and sculpture. In the 1970s Albuquerque emerged on the California art scene as part of the Light and Space movement, and she gained national attention in the late 1970s with her ephemeral pigment installations pertaining to mapping, identity and the cosmos, executed in the natural landscape. She is the recipient of numerous grants and awards and has had commissions at major sites around the world, including the Great Pyramids. Her work is found in collections including The Archives of American Art at the Smithsonian Institution, The Whitney Museum Of Art, The Museum Of Contemporary Art, Los Angeles, The Getty Trust, and the Los Angeles County Museum Of Art. Visit her website here.

Ed Ruscha (b. 1937) is an American artist associated with the Pop Art movement who has worked in the media of painting, printmaking, drawing, photography, and film. His work is collected by museums worldwide, and he has had major museum exhibitions at venues such as the Whitney Museum of American Art, the Musée National Jeu de Paume (Paris), the Los Angeles County Museum of Art, and Kunstmuseum Basel (Basel, Switzerland). Read about Ruscha in this Wikipedia article. See samples of his work in the Museum of Moderan Art collection.

Cuban-born artist Enrique Martínez Celaya (b. 1964) was trained as an artist as well as a physicist. His artistic work examines the complexities and mysteries of individual experience, particularly in its relation to nature and time, and addresses themes such as memory, familiarity, attachment, love, death, and longing. His work has been widely exhibited internationally and is included in the permanent collections of the Metropolitan Museum of Art in New York, the State Hermitage Museum in St. Petersburg, the Whitney Museum of American Art in New York, the Moderna Museet in Stockholm, and the Museum der bildenden Künste in Leipzig, among others. As a physicist, Martínez Celaya published scientific papers on superconductivity and lasers, and is the inventor of several laser devices and of an often-cited patent.

According to the Internet Encyclopedia of Philosophy, Arthur Schopenhauer (1788-1860)

has been dubbed the artist's philosopher on account of the inspiration his aesthetics has provided to artists of all stripes. He is also known as the philosopher of pessimism, as he articulated a worldview that challenges the value of existence. ... his thought informed the work of such luminaries as Sigmund Freud, Ludwig Wittgenstein and, most famously, Friedrich Nietzsche. He is also known as the first German philosopher to incorporate Eastern thought into his writings. ... he argued that the world was essentially irrational. 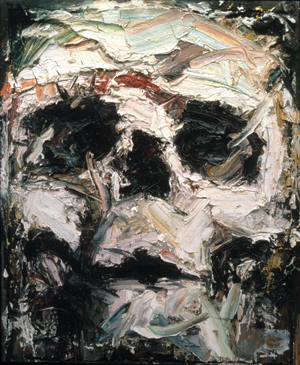 The paintings of Los Angeles artist Jim Morphesis (b. 1948) have been shown in nearly two hundred national and international exhibitions since the early 1970s, and are in the permanent collections of more than 25 museums, including the Los Angeles County Museum of Art, the Metropolitan Museum of Art, New York, and the San Francisco Museum of Modern Art. Morphesis has been recognized with awards that include: the Los Angeles County Museum of Art, Modern and Contemporary Art Council, New Talent Purchase Award, the Louis Comfort Tiffany Foundation Grant for Painting and Sculpture and a First Prize at the Fourth Florence International Biennial of Contemporary Art. Born in Philadelphia, Morphesis received his Bachelor of Fine Arts degree from Tyler School of Art of Temple University in 1970, and earned his Master of Fine Arts degree from the California Institute of the Arts in 1972.

Morphesis shared his thoughts on MOCRA in a 2014 episode of MOCRA Voices. The exhibition Jim Morphesis: Wounds of Existence was held at the Pasadena Museum of California Art from January 25 to May 31, 2015. Visit the exhibition website. Read a Huffington Post interview with Morphesis here. Or, watch a 2011 interview with the artist:

The iconostasis is an architectural feature of Eastern Christian churches, consisting of a wall of icons and religious paintings, separating the nave from the sanctuary in a church.

Ulysses is the Latin name for Odysseus, the legendary Greek king of Ithaca and hero of the Greek poet Homer's epic poem The Odyssey, as well as a major figure in the Trojan War as told in Homer's Iliad. Learn more here.

One of the best-known representations of the Crucifixion of Christ comes from seventeenth-century Spanish painter Diego Rodríguez de Silva y Velázquez (1599-1660). The painting is in the collection of the Museo del Prado in Madrid. Learn more here.

Iranian artist Shirin Neshat (b. 1957) currently lives and works in New York City. She is best known for video works that address themes of gender and society, the individual and the group, religion, violence, and madness. Her work as been featured in solo exhibitions at major venues worldwide, including the Whitney Museum of American Art, the Art Institute of Chicago, Dallas Museum of Art, National Museum of Contemporary Art in Athens, Walker Art Center in Minneapolis, and National Gallery of Iceland in Reykjavik, as well as numerous biennials and festivals.

Shirin Neshat: Facing History was exhibited at the Hirshhorn Museum in Washington, DC, from May 15 to September 20, 2015. Learn more here. Or watch this TED Talk given by Neshat in 2010:

Learn more about contemporary Islamic art through the NPR series "Muslim Artists, Now," or through the Doris Duke Foundation for Islamic Art.

Lynn Adrich is a Los Angeles-based artist whose work is found in the collections of the Los Angeles County Museum of Art, the Museum of Contemporary Art, Los Angeles, the Calder Foundation (New York), and the New York Public Library. She has participated in many solo and group exhibitions worldwide. Read an L.A. Times review of her 2013 exhibition Un/Common Objects at Williamson Gallery, Art Center College of Design in Pasadena. Visit the artist's website here.

Read a discussion of crepuscular rays in this Wikipedia article. 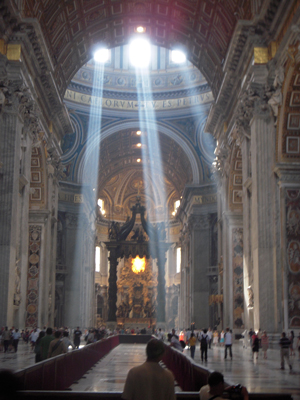 Mike Kelley (1954-2012) was an influential artist who worked in a broad array of genres and styles, including performance, installation, drawing, painting, video, photography, sound works, text, and sculpture. He also worked on curatorial projects, collaborated with many other artists and musicians, and produced a body of critical and creative writing. His work questions the legitimacy of "normative" values and systems of authority, and attacks the sanctity of cultural attitudes toward family, religion, sexuality, art history, and education. Kelley received the Skowhegan Medal in Mixed Media, and two grants from the National Endowment for the Arts. His major solo exhibitions include Whitney Museum of American Art, New York; Los Angeles County Museum of Art; Hirshhorn Museum and Sculpture Garden, Washington, DC; Tate Liverpool; Centre Georges Pompidou, Paris; and Kunsthalle, Basel; among others. Visit the artist's website here.

Fox mentions a 1993 exhibition at the Whitney Museum titled Mike Kelley: Catholic Tastes. Find a copy of the exhibition catalog near you on WorldCat. Watch an Art21 segment on Mike Kelley here.

James Turrell (b. 1943) is an American artist primarily concerned with light and space. Among other works, he is known for his "skyscapes" and his ongoing project to transform the Roden Crater. Visit the artist's website here.