Adrian Kellard was a gifted artist whose life was cut short by AIDS in 1991. MOCRA is fortunate to have the largest collection of Kellard’s work in any single art institution. In 2011, thirty years after the identification of HIV and twenty years after Kellard’s death, MOCRA presented a solo exhibition featuring a number of Kellard’s most important works.

It was also a fitting time for MOCRA Director Terrence Dempsey, S.J., to speak with photographer Regina DeLuise, a close friend of Kellard, and Susan Schreiber, Kellard’s New York gallery dealer. Together they share stories of Kellard that serve to illuminate his artistic aims and influences, his distinctive visual style and treatment of his woodcut medium, and the ways in which Kellard’s upbringing, sexual orientation, and faith found expression in his work.

For the last twenty years, the work of Adrian Kellard has been in my care. Since he and I were the same age, (born two days apart, same year) . . . The parallels of my life and Adrian's have always been sharply drawn and alive to me. What would Adrian's life and work looked like had his life not been cut short by AIDS in 1991? It is extraordinary to see anew, not only the depth of his talent, dedication and commitment to his art and his faith, but also how prolific he was. The work at MOCRA represents the largest collection of Adrian's work anywhere (and a number of his most important pieces). The Grey Art Gallery, Neuberger Museum, Ali Forney Institute, and The American Visionary Museum also hold magnificent works in their collections. My hope is that Adrian’s work continues to be seen and appreciated, inspiring people to realize their best and most loving selves. I have kept Adrian’s work safe and protected over the years, but have not accomplished much else for him. My gratitude to Fr. Terrence Dempsey is profound. He is to be credited with recognizing the importance of this work when Adrian was alive, and never tiring in his efforts to present it to the world. To see the exhibition at MOCRA and the tremendous care and attention both Terry and David Brinker have shown has been extraordinarily moving to those of us who knew and loved Adrian.

Scroll down for a Listening Guide to this episode. 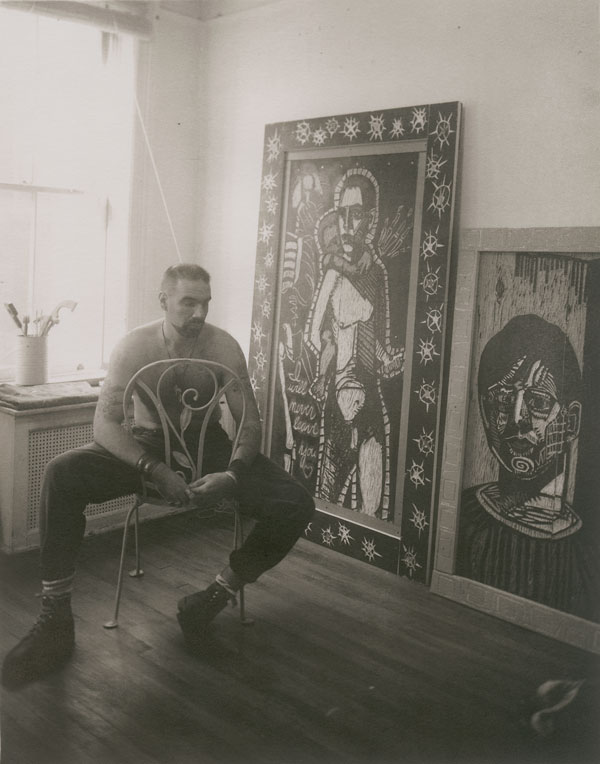 American artist Adrian Kellard (1959–1991) had a brief but productive career that was cut short by his death from AIDS-related causes at the age of 32. Kellard pursued art studies at SUNY Purchase, then moved to New York City and studied under artist Thomas Lanigan-Schmidt. Kellard achieved national and international recognition. His work has been featured in exhibitions at the Isabella Stewart Gardner Museum in Boston, New York University’s Grey Art Gallery, the Center on Contemporary Art in Seattle, the Musée d’Art Contemporain de Montréal, and the American Visionary Art Museum in Baltimore. (Photo: Regina DeLuise, “Adrian Kellard in His Studio,” 1989. Palladium print. MOCRA collection.) 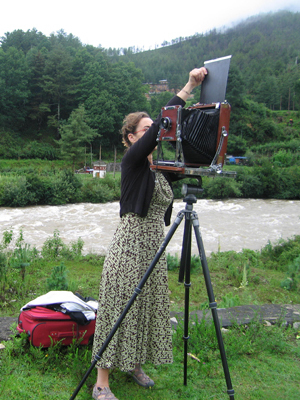 Regina DeLuise is a photographer and educator based in Baltimore, Maryland. She received a BFA at the State University of New York at Purchase and an MA at the Rosary College Graduate School of Fine Arts in Florence, Italy. She has taught and given workshops on photography at several major institutions, including the Smithsonian Institution, Cooper Union, and Pratt Institute. She has been teaching photography at Maryland Institute College of Art since 1998. DeLuise has shown in numerous solo and group exhibitions across the United States and Europe as well as in Japan and Bhutan. Her work is in the collections of the Museum of Modern Art in New York, the Metropolitan Museum of Art, the Corcoran Gallery of Art in Washington, DC, the San Francisco Museum of Modern Art, and the Art Institute of Chicago, to name just a few. DeLuise’s work was featured in the 2015 MOCRA exhibition “Vast Bhutan: Images from the Phenomenal World.”

Susan Schreiber has worked with contemporary artists in New York City for over 30 years. She established her gallery in Soho in 1986 and was pleased to present a solo show of Adrian Kellard's work as the inaugural exhibition. The gallery lasted for 5 years during which time Adrian's work was featured in annual solo shows as well as group exhibitions. She is proud to have been Adrian's dealer and friend until his death in 1991. Since then Susan has worked as a private dealer and art consultant. From 1995 until 2010 she was the director of PS122 Gallery, a small non-profit gallery which provided exhibition and support services for emerging artists. During that time she worked closely with artists, curators and critics to help launch a successful website for the gallery and developed new and innovative programs to allow artists to create unusual installations and collaborations. She has served on several juries for arts councils and alternative art spaces. Susan is currently exploring additional aspects of arts administration in her new role as Volunteer Coordinator at The Jewish Museum in New York.