So That You Know Each Other: Intercultural Reflections on Art, Beauty, and Islam

This program, presented on Dec. 6, 2015, explores historic and contemporary approaches to Islamic art, from perspectives both within and outside of Islam. The guiding concept of the program is interculturality.

When people from two different cultures first meet, they cannot help but consider each other from within their own cultural frameworks and biases. However, if they undertake a process of self-reflection, questioning their taken-for-granted assumptions and allowing that the other party has their own culture and assumptions, then an intercultural exchange can take place.

At their best, intercultural exchanges can lead to imaginative adaptations, innovative perspectives, and creative change, qualities exemplified by the art of Salma Arastu. 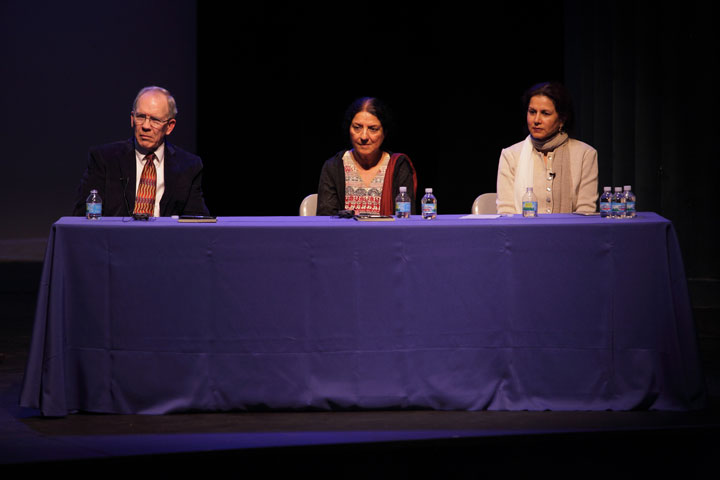 Salma Arastu was born in Rajasthan, India, and graduated with a Masters in Fine Arts from The Maharaja Sayajirao University of Baroda, India. She presently resides in the San Francisco Bay area. Arastu works in a variety of media, including painting, drawing, printmaking and sculpture. Her works are found in numerous private and public collections, such as the 9/11 Memorial Museum, New York; the Museum of Modern Art, Hyderabad, India; the National Gallery of Art, New Delhi, India; the Islamic Museum of Australia, Melbourne; and the State Museum of the Arts, Harrisburg, PA.

Ghazala Hayat, M.D., is Professor of Neurology at the Saint Louis University School of Medicine. Among various leadership positions, she is director of the Clinical Neurophysiology fellowship and she is also director of the ALS clinic. Her interests include peripheral neuropathies, compressive neuropathies, neuromuscular junction disorders and electrodiagnostic studies. Dr. Hayat is a fellow of the American Academy of Neurologists, American Association of Neuromuscular Disorders & Electrodiagnostic Medicine. She had been nominated each year for America's Best Doctors since 2007. In addition, Dr. Hayat is Chair of Public Relations for the Islamic Foundation of Greater St. Louis and a past board president of Interfaith Partnership.

Dr. Jack Renard is Professor of Islam-Christianity/Comparative Theology in Saint Louis University's Department of Theological Studies. He is a specialist in Islamic religious studies with particular interest in religious literature and visual arts. Recent books include Islam and Christianity: Theological Themes in Comparative Perspective and Fighting Words: Religion, Violence, and the Interpretation of Sacred Texts.

Dr. Michal Jan Rozbicki (1946–2019) was Professor of History at Saint Louis University. He authored or edited eleven books, including the award-winning Culture and Liberty in the Age of the American Revolution, and held fellowships from several global institutions, including the Rockefeller Foundation, the American Council of Learned Societies, Oxford University, and the Kennedy Institute for North American Studies in Berlin. At the time of this conference he was serving as Director of the Center for Intercultural Studies, which he founded in 2011. It is devoted to systemic research on the interactions between different cultures, and to developing interdisciplinary methodologies of interpreting them.

Read a remembrance of Dr. Rozbicki