Most of the instructors in the Saint Louis University Department of Physics are continuously engaged in the exploration of new ideas. The following list gives you an idea of what they are thinking about outside of the classroom. Many of the research projects led by faculty involve the participation of undergraduate students. 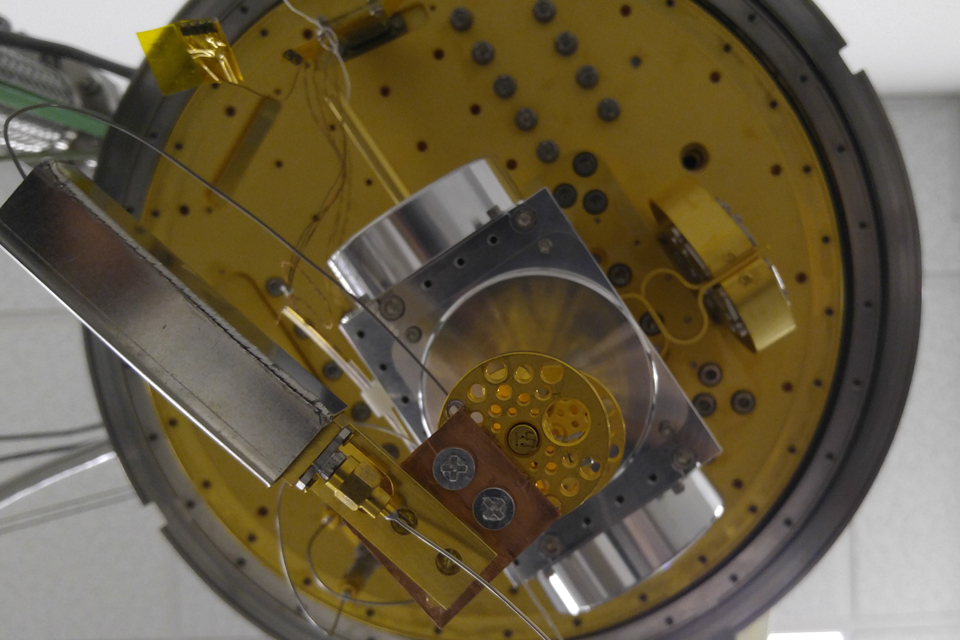 David Wisbey, Ph.D., uses the adiabatic demagnetization refrigerator (ADR), capable of reaching temperatures below 42 mK. Professor Wisbey uses this to study materials for quantum information. Quantum bits (or qubits) and microwave resonators, integral parts of a quantum computer, must be isolated from their environment in order to perform operations.

Bored by billiard ball collisions? How about collisions of space-time sheets? Saint Louis University professor Ian Redmount, Ph.D., has long been interested in the study of the structure of space-time itself.

Some years ago he devised a formula that applies to null sheet-collisions.

The formula is known to physicists today as the DTR relation, as it was also discovered independently by Dray and tHooft (tHooft is the 1999 co-recipient of the Nobel Prize in Physics, for contributions in subatomic physics).

More info about research in cosmology and astronomy can be found at Physics Central, an electronic publication of the American Physical Society.

From Parachutes to Whales

Lunge feeding is one of several strategies employed by baleen whales to catch in only one gulp a large amount of krill and other small prey that typically swim in schools. In many ways, the water-filling process that expands the initially folded, highly-extensible and compliant buccal cavity skin shares a lot of commonalities with the unsteady fluid dynamics of parachute inflation.

Jean Potvin, Ph.D., joined forces with faculty from the University of British Columbia Zoology Department to propose a new theory of the drag force that is generated during lunge feeding.

The result is a new simulation program that computes the full trajectories of the whale and water that it is engulfing. This new tool should give biologists the means to compute the entire energy budget of this peculiar feeding strategy, a key element needed to understand why whales have evolved to be so large.

Probing the Roots of Quantum Mechanics

For many years, Thalanayar Santhanam, Ph.D., has been studying one of the root concepts of quantum mechanics - the so-called "commutation rules".

These form the basis of the well-known Uncertainty Principle of Quantum Mechanics, which specifies which physical quantities — such as position, momentum and energy — can be measured simultaneously, and which cannot. These commutation rules not only depend on the specific physical quantities, but also on the type of physical system that is being studied, i.e. individual atoms and particles, group of atoms, and so on.

Most importantly, they also depend on the type of energy spectrum that they have. Santhanam's interest has been on finding out those commutation rules that apply to systems possessing only a finite number of energy levels (in contrast to those systems that have an infinite number of levels, like ordinary atoms). With collaborators, he has come up with relationships that have attracted the attention of theoretical physicists from around the world.