Race and Representation: Euro-American Depictions of Native Americans and Their Cultures 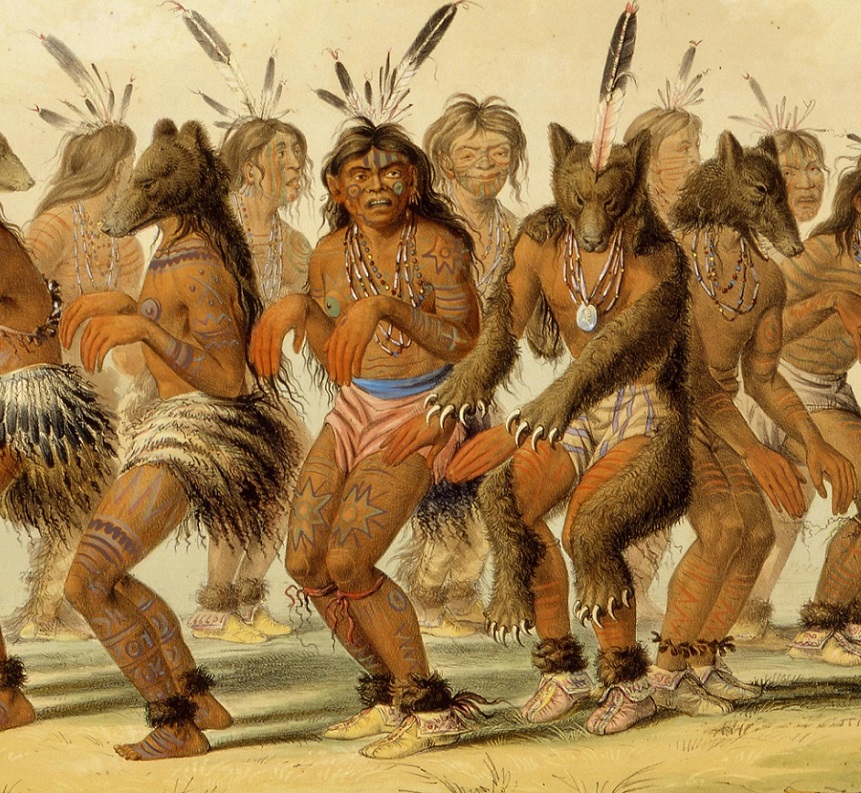 The Bear Dance (Detail)
John McGahey (English, b. 1817) after a painting by George Catlin (American, 1796-1892)
No. 18 from Catlin’s North American Indian Portfolio: Hunting Scenes and Amusements of the Rocky Mountains and Prairies of America by George Catlin
1844
Hand-colored lithograph
Gift of Timothy and Jeanne Drone, 2018

Race and Representation: Euro-American Depictions of Native Americans and Their Cultures is a joint effort of the art history course ARTH 4900 Research Methods and the Saint Louis University Museum of Art, and was inspired by the recent donation of art and historical artifacts to the University by Timothy and Jeanne Drone. The exhibition opened at SLUMA on December 7, 2018 and remained on view until May 26, 2019.

Race and Representation presents a selection of nineteenth-century Euro-American lithographs of portraits, activities, and rituals of Indigenous North Americans from the perspective of postcolonialism, a methodology for interpreting visual culture that brings the past and present results of imperialism to the foreground. Underscoring the reciprocating impacts that colonizers and the colonized have on each other, this exhibition seeks to provide a recontextualization of these images through the lens of Euro- and Native American relations.

Race and Representation: An Exercise in Postcolonial Analysis

“First, it is not a study of other cultures. Looking at African masks or Australian aboriginal painting is not the same as postcolonial analysis. Postcolonial theory is concerned with something rather more specific: it deals with the interaction between imperial and indigenous cultures, most notably that between Western imperial nations and their colonies (but not exclusively). So rather than exploring other cultures as such, it looks at what happens to cultures when they meet, what the material effects of colonisation are, how the process of colonisation changes the ways people think, and act, and write, and paint, and so on.”

The United States government’s policies of acculturation, assimilation, and forced removal regarding the Native populations of North America from the Jefferson administration to the passage of the Indian Removal Act in 1830 are an essential component of the Euro-American historical curriculum. Yet the awareness of the historical details of the American colonial enterprise and its impact on indigenous civilizations is only part of the practice of the postcolonial methodology used for research and the analysis of visual culture. Even more critical for the interpretation of visual culture from the postcolonial perspective is a deeper appreciation for the struggle over cultural and historical narratives that imperialism entails.

Therefore, it is imperative that when we look at the prints on display in this gallery, we recognize that we are looking at the diverse appearances, activities, and rituals of one race through the eyes of another. And while these images have been widely regarded as demonstrating a deep admiration and profound respect for the cultures being depicted, others have described them as romanticized, exploitative, and even racist. Whether or not these artists or the publishers of these images subscribed to the prevailing dogmas of Manifest Destiny and social Darwinism as the principal forces behind the severe reduction of the Native American population, their images do in many ways reflect the broader nineteenth-century Euro-American viewpoint of the Indigenous peoples of North America as “other.”

Further complicating the display of these images is that to focus on their aesthetic value at the expense of their historical context does a tremendous disservice to the cultural groups being depicted. Yet to disregard the historical importance and quality of these images is likewise a missed opportunity to better understand what it means to represent a subject, and how that subject is subsequently consumed by diverse audiences. This exhibition does not presume to resolve this complex dilemma, but rather to create a forum in which to view these images both as artistic endeavors and as historical artifacts that—when properly contextualized— constitute a valuable cultural resource.

This exhibition is also intended to demonstrate our appreciation for Timothy and Jeanne Drone, who possess not only the foresight and acumen to collect and preserve such artifacts and visual culture, but also the generosity to make a gift of them to the students, faculty, and staff of Saint Louis University.

In 1834, George Catlin witnessed the Choctaw tribe stickball game, which he depicted in two paintings that were subsequently reproduced in the lithographs seen here. The ball game was seen in the community as a way for individuals to distinguish themselves within the tribe, as well as a means of settling disputes within the tribe or between tribes. Before the game, the athletes would participate in ritual dances and songs for good luck. In Ball Play Dance, the players and other tribe members are neatly organized in groups that represent the spiritual nature of the pregame rituals that functioned as a form of collective worship. In contrast, Ball Play is more chaotic, emphasizing the potential of the game as a means for an individual to stand out in the tribe. Indeed, as a form of symbolic combat, competitors played fiercely for personal and tribal glory in games that could last up to several days.

While stickball is perhaps better known today for its reputation as the wild, violent precursor to modern lacrosse, the original game is still played today and remains a vital part of Choctaw culture. The World Series of Stickball takes place at the annual Choctaw Indian Fair in Choctaw, Mississippi, where multiple divisions of men, women, and youths compete using traditional equipment. In recent years, teams comprised of the descendents of relocated Oklahoma Choctaws and Chickasaws have challenged the Mississippi Choctaws at the annual fair, revitalizing the sport at the national level. The Choctaw and Chickasaw nations were two of the so-called “Five Civilized Tribes” due to their perceived willingness to adopt Euro-American attributes.

Peace medals were traditionally given to prominent Native Americans by Euro-American and European colonizers to seal alliances. The peace medals shown are from a collection of United States presidential medals, which were originally cast in silver using engraved dies. These medals depict presidential portraits on one side and an image of a U.S. soldier and a Native American shaking hands on the other. The handshake is accompanied by the inscription “Peace and Friendship” along with a crossed tomahawk and pipe. The medals were created in three sizes, the largest reserved for chiefs and other dignitaries. While the awarding of these peace medals to Native Americans represented alliances with the U.S. government, they did not guarantee harmony. Following 1842, bronze replicas of the original Presidential medals were created for presentation to historical societies or government officials. 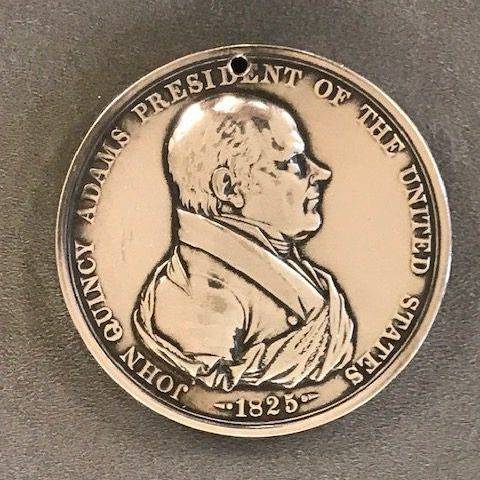 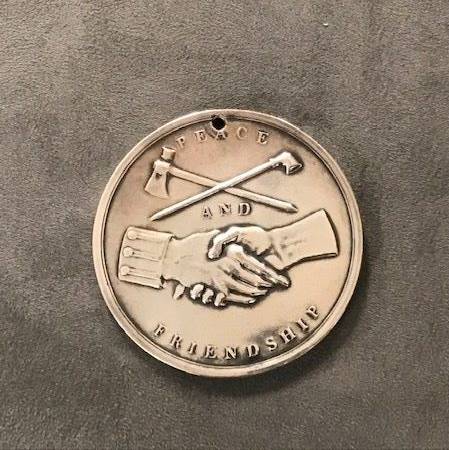 Original silver peace medals given to Native Americans by the United States government are exceedingly rare, and those that were worn by chiefs and warriors typically show significant signs of wear. The medal on view here is likely a copper restrike created for collectors by the U.S. Mint that was subsequently silver-plated by profiteers for trade with the Native population, a practice that began in the late nineteenth century. Careful examination of the interior of the hole reveals a small patch of copper underneath the thin layer of silver plating. 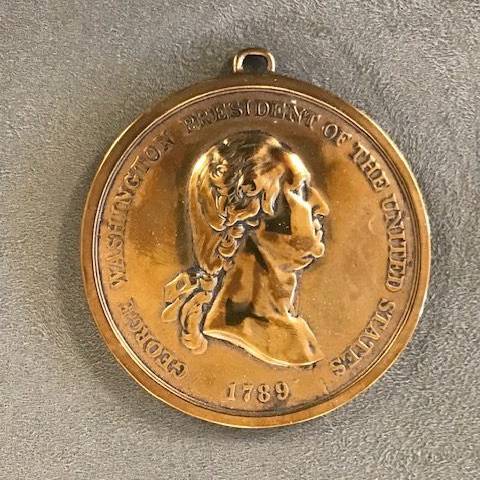 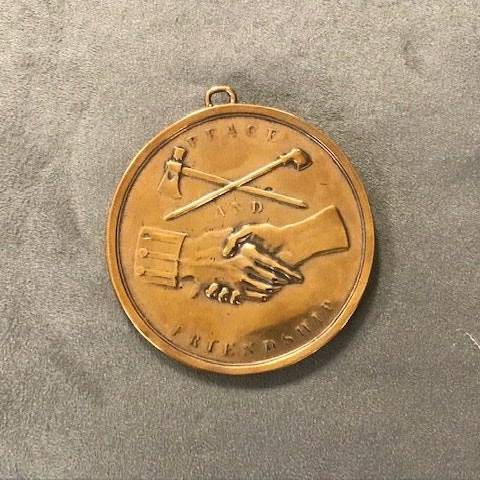 The size and material of this medal, along with the combination of imagery on the front and back, suggest that it is a version that was first made as early as 1903 to complete the set of bronze replicas of presidential medals that began with the restrike of the original 1801 Thomas Jefferson peace medal in 1842. This particular Washington peace medal on view is exceptional in that it has a loop at the top for wearing, which is an unusual feature as the replicas were for collectors only and never intended to be worn by Native American dignitaries. Despite the misleading name “yellow bronze,” the material is actually an alloy consisting largely of copper.