Interested in a career in biology? The Saint Louis University Department of Biology has the perfect program for you. 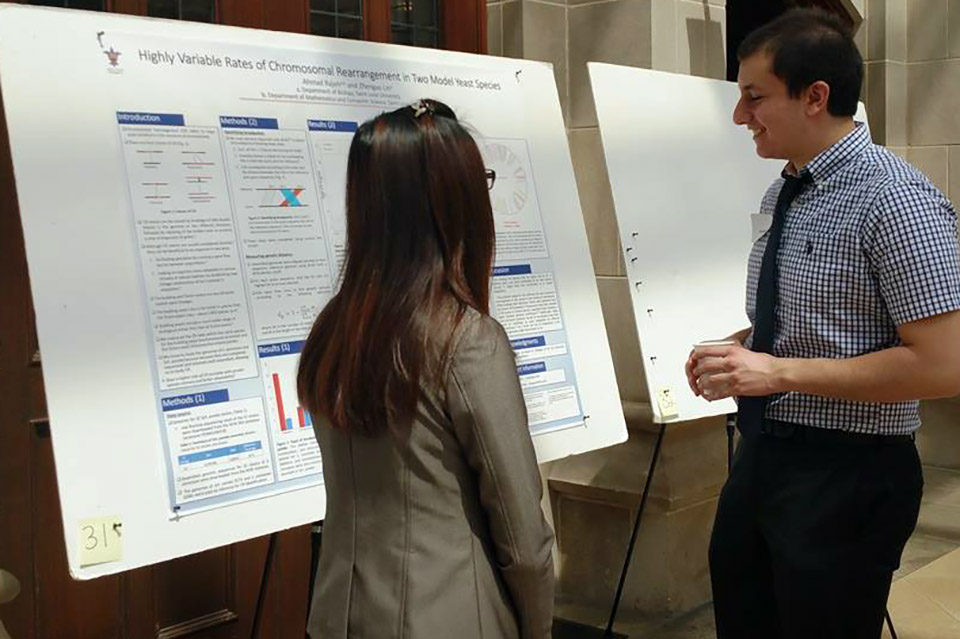 The Department of Biology offers advanced degrees at both the master's and doctoral level. Excellent research facilities are available in individual faculty labs; the department also maintains a core facility.

We are organized into two broad areas of specialization: cell and molecular regulation (CMR) and ecology, evolution and systematics (EES). In either of these areas, you may elect to pursue one of the following programs of graduate study:

We strongly advise you to explore our faculty’s research areas to identify whose work is of interest. Applicants who identify and correspond with a faculty member about potential graduate study will substantially improve their chances of acceptance.

Statement on the Teaching of Evolutionary Biology

The most comprehensive definition of biology is that it is the investigation of the emergent process that we call evolution.

Evolutionary theory's seamlessly coherent explanatory power for the phenomena that biology investigates at every level of complexity, in the myriad fields that biology encompasses, and in the interrelationships between and among those fields, is unrivaled and presents evolutionary theory as the grand unifying theory of biology.

The theory of evolution has been repeatedly tested for over a century for inconsistency. While new findings continue to illuminate the dimensions and consequences of the evolutionary process, the central tenets of evolutionary theory remain unchanged. It is accepted by scientists — religious believers and nonbelievers alike — in their refereed scientific publications, and transcends theory.

For educators to pretend that biology is anything else than the study of the process and outcomes of evolution, or that evolution is not an accepted scientific theory, would misrepresent the vast body of knowledge that has accumulated over the past century and a half. Such misrepresentation would be a gross disservice to the human community.

The theory of biological evolution does not conflict with religious faith in God Who is ground of all existence, or with faith in Jesus as Messiah. This is so since biological evolution is an existent, testable truth, as are all truths that have been discovered by the empirical methodology of science. It is not within the scope of either biology or any other scientific discipline to investigate questions that lie within the realm of religion, such as why there is existence.

There is no conflict between the theory of biological evolution and religious faith in God. Evolution is an existent, testable truth, as are all truths that have been discovered through the empirical methodology of scientific inquiry. It is not within the scope of biology or any other scientific discipline to investigate questions that rightly lie within the purview of religion.

Since first proposed, the theory of evolution has transformed the study of life by providing a framework for understanding natural processes. In the words of the renowned evolutionary geneticist Theodosius Dobzhansky, "nothing in biology makes sense except in the light of evolution."

Empirical studies over the past 150 years have provided tightly interwoven evidence for evolution and effectively serve as a guiding light for current and future biological inquiry. To confront students with untestable alternatives would not only misrepresent the significance of evolutionary theory and the legitimacy of the scientific method, but would also jeopardize future achievements.

We, the faculty of the Department of Biology at Saint Louis University, a Jesuit Catholic institution of higher learning, accept the above statement as basic to our mission of teaching, in order to further the goal of investigating and promoting the truth.