Research in Wang's laboratory focuses on mechanisms and regulation of signaling initiated by G protein-coupled receptors (GPCR). Human GPCRs mediate responses to light, odor, taste, hormones, and neurotransmitters. Defects in GPCR signaling pathways can cause a multitude of human diseases including hypertension, heart failure, and cancer. A better understanding of the mechanisms regulating GPCR signaling pathways will aid in the ability to define targets for therapeutic intervention, and could eventually lead to an entirely new class of pharmaceuticals.

The GPCR signaling pathways are highly conserved across evolution, which allows researchers to use the simplest eukaryotic organism, the budding yeast Saccharomyces cerevisiae, as a model system. The yeast experimental system offers the powerful genetic and biochemical tools unavailable in any other eukaryotic systems. Currently, Wang is studying a novel mechanism by which GPCR signaling pathways are regulated, namely through stimulus-dependent ubiquitination of signaling components. He has found stimulus-dependent ubiquitination of key components of the pathway including G proteins and MAP kinases, and he is using genetic and biochemical methods to study how these modifications contribute to signaling regulation. Wang is also interested in identifying the molecular machinery that carries out these modifications and how GPCR signaling might in turn regulate their activities.

Another project in Wang's laboratory focuses on function and substrate specificity of a deubiquitinating enzyme Ubp3. Recently he discovered that yeast Ubp3 is a novel regulator of protein kinase C (PKC), serine/threonine kinases that play important roles in many cellular processes, including proliferation, differentiation and cell survival. He is now conducting biochemical analysis to elucidate the molecular mechanisms by which Ubp3 regulates PKC. Wang is also planning on extending his work to other systems including human cell lines and pathogenic fungus to test whether PKCs are similarly regulated by deubiquitinating enzymes in these systems. Insights gained here could potentially open up an exciting possibility of targeting deubiquitinating enzymes as a strategy for developing novel therapeutics against cancer or fungal infections. 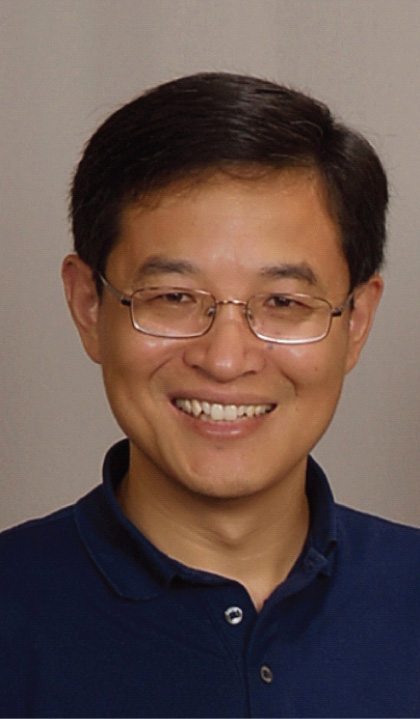