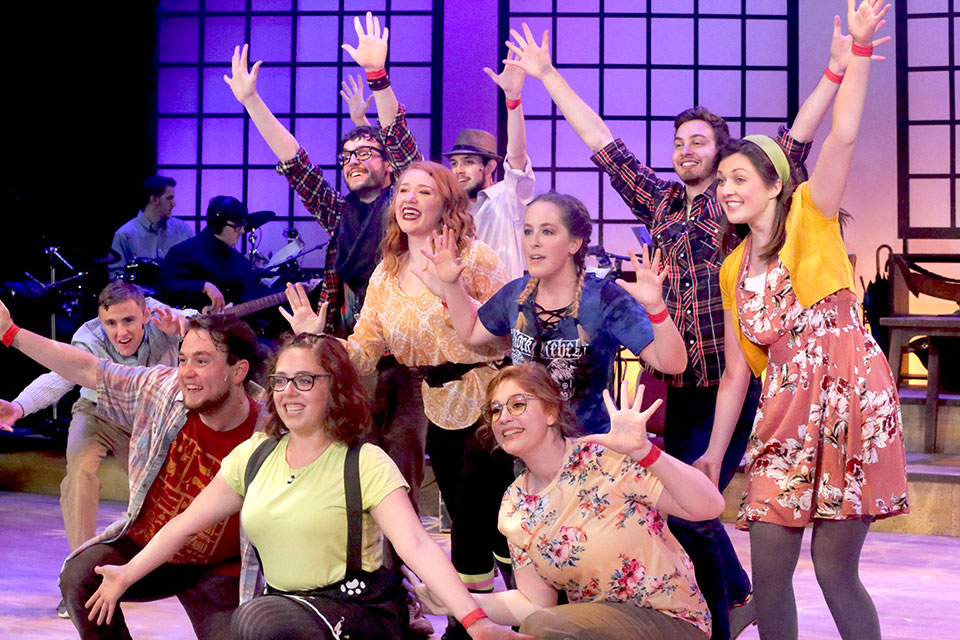 From the University Theatre's April 2019 production of "Godspell."

2019-20 University Theatre Season: A Season of Love and Grace

For our 2019-20 season, we continue our affiliation with the Kranzberg Arts Foundation and look forward to you joining us at our various performance spaces. Thursday through Saturday performances begin at 8 p.m., Sunday matinees start at 2 p.m. There will be an additional matinee on Saturday, February 29, 2019 at 2 p.m. at the Kranzberg Arts Center and due to the size of the venue, a seating policy will again be in place. Unfilled seats will be released seven minutes prior to the start of the show. Your cooperation is appreciated.

The season opens with the William Shakespeare classic "Twelfth Night." Separated in a shipwreck, twins Viola and Sebastian each think the other is dead. The stranded Viola disguises herself as a man leading to a comical love triangle. Trickery, confusion and romantic hijinks abound in this most beloved of Shakespeare’s comedies. Directed by Nancy Bell.

"Rabbit Hole" by David Lindsay Abaire won the Pulitzer Prize for Drama in 2007 and tells the story of Becca and Howie Corbett. When a tragedy upends their lives, they struggle with their relationship, their family, and the challenging process of surviving loss. Directed by Gary Wayne Barker.

"Saint Joan of Arc" is a contemporary, devised adaptation of George Bernard Shaw’s "Saint Joan." This retelling of how a peasant girl, inspired by love of God and country, became a 15th century French military leader is a collaborative piece with Prison Performing Arts. Directed by Lucy Cashion.

Seating policy in place for this venue: Any unfilled seats will be released seven minutes prior to the start of the show. Your cooperation is appreciated.

The season concludes with Anne Washburn’s "Mr. Burns, A Post-Electric Play," a dark comedy set after a future, unnamed global catastrophe. We watch as the pop culture of one era evolves over a seventy-five year period in this homage to live theatre and the resilience of Bart Simpson through the ages. Directed by Tom Martin.

Auditions and technical interviews for the University Theatre Spring 2020 semester productions will take place in Xavier Hall by appointment on Sunday, January 12 from 5-8 p.m. and Monday January form 6-9 p.m. and are open to the entire SLU community. Be prepared with one classical comedic or dramatic monologue (1-2 minutes) for "St. Joan of Arc" and one contemporary comedic or dramatic monologue (1-2 minutes) for "Mr. Burns...". Those called back for "Mr. Burns..." will also be expected to sing. For audition and technical interview appointments, contact the productions office at produce.theatre@slu.edu.

Season tickets for University Theatre are available beginning July 22, 2019 through MetroTix at 314-534-1111 or at metrotix.com (search SLU). Season tickets may also be purchased through this order form.

All seating is general admission. Reserved seating is available for groups of 15 or more. Contact us at theatre@slu.edu for more information.

The University Theatre is located in Xavier Hall on the Saint Louis University campus at 3733 West Pine Mall, one block east of Vandeventer Boulevard and one block south of Lindell Boulevard. Parking for performances at this venue is available in the Queen's Daughters Hall lot located at 3730 Lindell Blvd.

Parking for the Kranzberg Arts Foundation venues as follows:

The University Theatre in Xavier Hall is available for rental. For more information, contact Dan Giedeman at dan.giedeman@slu.edu.

For information on performances for high school students, contact theatre@slu.edu.