After graduating from the One-Year MBA program this summer, Neha Chhabra began her new career at Nestle Purina in St. Louis. Her academic journey was years in the making and involved incredible personal sacrifice.

“I know what it’s like to work at my dream job. It just doesn’t feel like work,” Chhabra said about her current position, Specialist in Program Management, at Nestle Purina.

Chhabra knew where she wanted to work and used her education from Saint Louis University and determination to achieve her goal.

Chhabra earned both her Master's in Business Administration and Master’s in Economics at Pune University in India. She then enjoyed a six-year career in the private banking sector. After years of refining her business skills, she decided to take a leap of love and move to the United States to marry her husband. 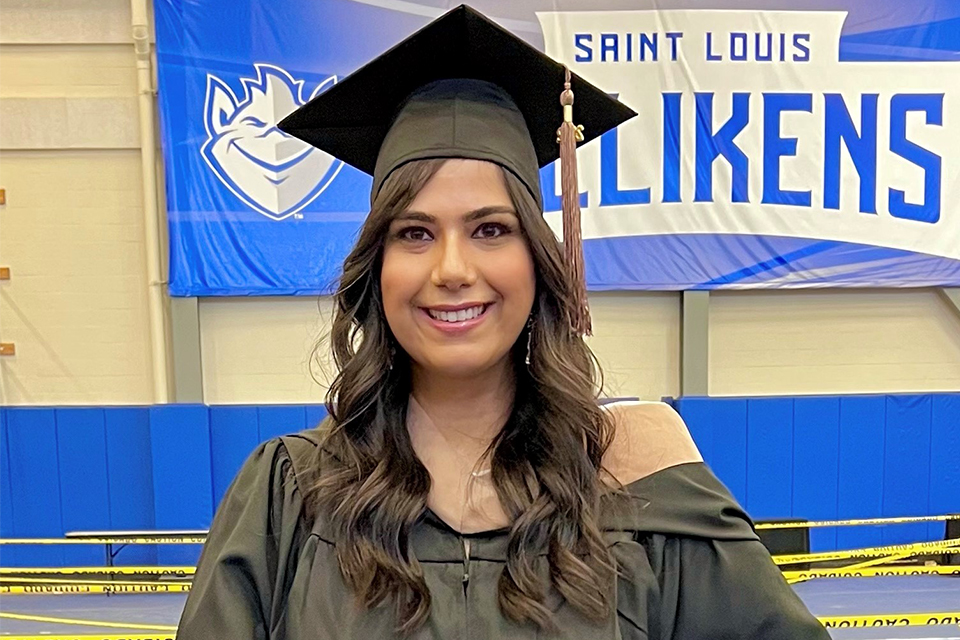 After putting her academic journey on hold for nearly 10 years following the birth of her children, Neha Chhabra graduated from the One-Year MBA program in May of 2022.

As she settled into a new country, Chhabra decided to revamp her education and applied to the One-Year MBA program at SLU in 2012. Life, however, had other plans.

“The day I paid my tuition was the day I found out I was pregnant,” Chhabra laughed. “I made the decision to concentrate on my family.”

Nine years later, Chhabra found herself in a position to focus on her professional and educational career again. In June of 2021, Chhabra began the One-Year MBA program with the hope of learning what was happening in the modern business world.

“The emphasis of SLU’s MBA program is data analytics and that’s exactly the new part of the market that had developed over the last few decades that I needed to learn.”

Chhabra’s first semester at SLU was online due to the COVID-19 pandemic, but she felt that she was able to fully grasp modern knowledge and concepts due to SLU’s outstanding business faculty.

“David Sanders was our program director and he explained everything well through recorded lectures.”

Chhabra was proud of herself and her data analytic cohort for their work during the first semester of the program.

During her second semester, Chhabra got involved with the Chaifetz Center for Entrepreneurship. Throughout the semester, she worked with Dr. Tricia Bagsby and others at the center to organize the inaugural Be Heard: Women in Leadership Conference in the Spring of 2022.

The final semester of the program includes a practicum where students work with either a business or a large corporation. Chhabra worked with Nestle Purina using a new technology called eye-tracking technology.

“We did a super interesting project and for the first time a practicum group was providing data to the company instead of simply analyzing it.” Chhabra reflected. The practicum not only taught her critical skills for the modern business world but also exposed her to her dream career.

“I think it was at this time that I also just became sure that this is the place I wanted to work when I finished my MBA,” Chhabra said. She began networking, using the connections she’d established through the practicum to secure her dream job.

Chhabra graduated from the One-Year MBA program in May. The graduation itself felt surreal to her.

“It was just an amazing experience in Chaifetz Arena. My kids were shouting ‘Mama, that’s my mom.’ My husband had to quiet them down,” Chhabra reflected.

Graduating and continuing her professional career was a personal goal for Chhabra, but it was also something she wanted to accomplish to show her children, especially her daughter, that you can focus on your family and career at the same time.

“I was really self-conscious about the fact that I had taken a break from the business world,” Chhabra reflected. “I feel like there’s this perception of moms in general that since we choose our families that we’re not driven or have aspirations. What they don’t understand is that you’re actually making a sacrifice.”

The One-Year MBA program provided her with all the resources needed to excel in business while still being a mom.

“There was no way I could have gone to school for two or three years to get my MBA with my husband and kids’ crazy schedules,” Chhabra said.  “Our professors were always amazing and they wanted us to succeed.”

“It was a really great experience,” Chhabra said. “I had a lot of inspiring people around me who inspired me to think in a different way.”