Leading the Fight Against Cancer Pain 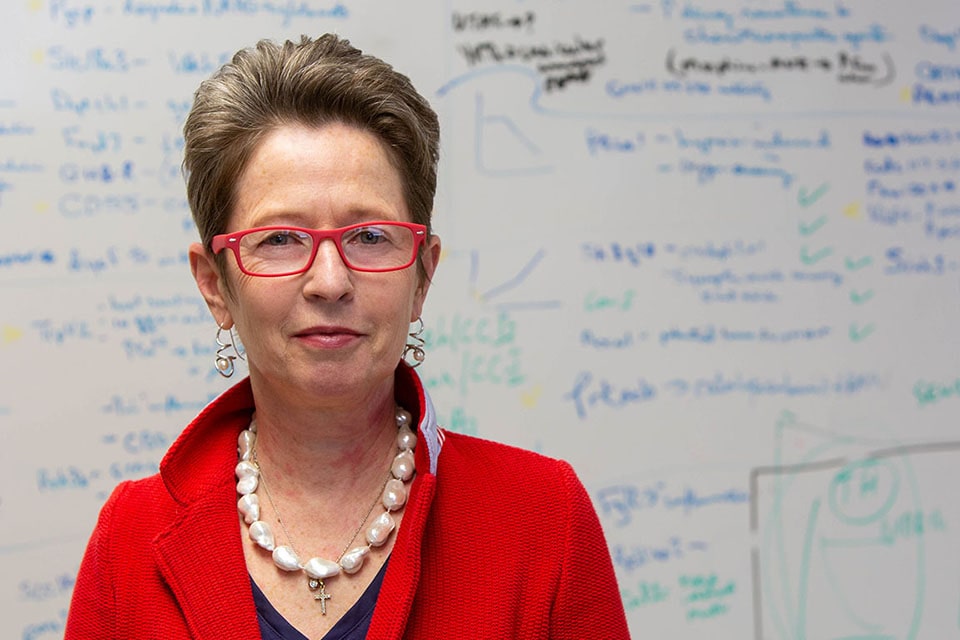 One of the most difficult aspects of cancer is the sustained and consistent neuropathic pain experienced by 40-80% of patients—both survivors and those undergoing chemotherapy treatment, even well after treatment has ended. This pain can cause sleep disturbances, anxiety, stress and other problems, and because there are so many highly effective chemotherapy drugs, large patient populations are dealing with pain for much of their lives.

Not only does prolonged pain lower the quality of life for these individuals, but many suffer from chemotherapy-induced cognitive impairment (CICI) or what’s commonly referred to as “chemo-brain.” CICI is a major neurotoxic side effect of widely used chemotherapy drugs, and symptoms can include decreased processing speed, memory, executive functioning and attention. No FDA-approved drugs are currently available to cure or prevent the symptoms. Even further, many turn to opioids to ease their chronic pain. And with the United States in the grip of an opioid crisis, opioids are but a temporary band-aid with both serious side effects and ramifications.

Salvemini, a professor in the Department of Pharmacology and Physiology at Saint Louis University, remembers the moment that sparked her interest in researching pain: “One day my mother called me, she said that one of her best friends had breast cancer, and she was on opioids. And she made a remark that she was actually experiencing more pain. She asked me if I knew anything about this—why would opioids appear to increase pain sensitivity.” At that point in 1992, Salvemini was mainly working on chronic, inflammatory diseases.

She started looking into why opioids led to hyperalgesia, a condition where the patient receiving opioids for pain treatment actually experiences increased pain sensitivity. Salvemini started to research how, mechanistically, a few doses of opioids cause pain. She and her partners discovered the role of superoxide in the development of opioid-induced hyperalgesia. They developed a small molecule antagonist of that free radical, which, when given simultaneously with morphine, would actually completely prevent the development of hyperalgesia and the development of tolerance against opioids.

At that time, there was a great deal of resistance in the community that opioids could actually cause pain. “So we and others had to start the field from scratch and go at it very slowly,” said Salvemini. “In general, the notion that opioids caused hyperalgesia and increased pain sensitivity was very novel. And there was resistance in terms of bringing that novel idea out there.” But over time, more people got involved, Salvemini’s team received additional funding, and the stage was set for further research and testing the concept that opioids can cause profound inflammation in the central nervous system. “The field now is well established. It took a long time,” she said.

Salvemini was recently named the Director of the new Henry and Amelia Nasrallah Center for Neuroscience at Saint Louis University, dedicated to fostering and facilitating interdisciplinary research and education in neuroscience within the School of Medicine and across several colleges at the University. The Center was made possible through a generous $300,000 endowment from Dr. Henry Nasrallah, chair of the Department of Psychiatry, and his wife, Amelia, a research psychologist.

“We both hope that this gift will elevate the visibility of neuroscience research and education in the School of Medicine and across SLU Under the strong leadership of Daniela Salvemini,” said Dr. Nasrallah in a recent statement. A testament to Salvemini’s dedication, contributions to the field, and talent, the new appointment will provide her even more opportunity to continue her research and advance the critical work of understanding pain within the context of cancer and opioid use.

Salvemini was also recently awarded $4.5 million in grant money from the National Institutes of Health (NIH) to study the pain related to chemotherapy and opioids. Much of that funding, $2.8 million, will be allocated directly to researching and understanding CICI, while $1.7 million will go toward the side effects of opioids, with a focus on the addiction that can potentially arise and lead to withdrawal symptoms after the drug has been stopped.

One of Salvemini’s most significant findings is the concept that pain can occur even in the absence of a disease. Even after cancer has been eradicated from the system, chronic pain can set in and wreak havoc on an individual’s nervous system and quality of life. When specifically honing in on the use of opioids, Salvemini has seen increased pain sensitivity. “If we take normal rodents and we give them opioids,” she said, “you see this profound neuro-inflammatory processes in the central nervous system. And if you use tests to administer opioids when no injury has occurred, you will see an increased pain sensitivity. This tells us that the opioid itself can cause pain.” This results in the perception that the opioid is ineffective, leading to the prescribing of a higher dose. “My goal,” Salvemini continued, “is to come up with novel medications that you can give in conjunction with the opioids to make the opioid highly effective at very low doses, without the potential for dependence, reward and addiction.”

The Cancer Is Gone, the Pain Sets In

While the NIH funding partially funds the opioid research, the bulk of the money is apportioned to the study of chemotherapy and traumatic nerve injuries. “We look at chemotherapy because I have particular interest in that area,” said Salvemini. “About 10 years ago, looking at approaches to treating the side effects of chemo, such as pain and sleep disturbances, was not really a high priority. We were more concerned about killing cancers. But now that we have some really nice agents that are very effective in attacking cancer, leading to higher survival rates, we also have a lot more patients that will be in pain for a long time.” About 25 to 30 million people in the United States alone live with neuropathic pain, which is the most challenging pain to treat.

“I think we’re getting closer and closer to finding a treatment approach,” she said. “Because we are realizing that neuro-inflammation is so important. Up until about 10 years ago, all of the therapies used to treat pain were mainly focused on a single cell, the neuron.” Scientists now recognize that neuro-inflammatory processes are key to understanding and treating pain. Neuro-inflammation activates immune cells and glial cells—cells which surround neurons. When glial cells are activated, they release mediators that then activate the neuron. But glial cells themselves are also important in modulating synaptic transmission, the biological process by which a neuron communicates with a target cell across a synapse. “So what we’ve been proposing (SLU researchers and other university research partners) is that we should think about not only targeting the neuron, but also targeting the glial cells, which are just as important to modulate neuronal excitability,” Salvemini said. “My mission is to see whether we can come up with strategies that can alleviate this [pain] so we can really have a major impact on human suffering and quality of life for many patients.”

In addition to her own work, Salvemini mentors and supervises students at the University. She works with several graduate students and post-doctoral students, each of whom has their own specific interest in the field, such as chemotherapy that kills solid tumors or those that focus on breast, lung, and colon cancers. “They’re probably in the lab with me, conducting solid experiments, for about three or four years,” she said.

A Passion For Discovery

Salvemini, her team, and her inter-university collaborators are excited that the NIH is channeling a significant amount of funding and resources toward tackling the pain problem, and are thrilled with the progress they’ve made. “It’s going to be an exciting time for discovery of non-narcotic agents,” she said. Inevitably she thinks back on her mother’s friend, and the moment she decided to embark on this journey. “I think you have to do this with a passion,” she said. “Because it’s not easy and it takes a long time, especially when you come up with different concepts and approaches. You have to have passion and determination, to never give up and continue. Yes, experiments can fail, but once you hit something good, then it’s exciting.”

I think you have to do this with a passion, Because it’s not easy and it takes a long time, especially when you come up with different concepts and approaches. You have to have passion and determination, to never give up and continue. Yes, experiments can fail, but once you hit something good, then it’s exciting.

Support the School of Medicine

When you give to Saint Louis University, you make a difference in the lives of others. By helping to fund world-class education, leading-edge research, compassionate health care and mission-focused service, you become SLU’s partner in serving a higher purpose and seeking the greater good.

Thank you for sharing our belief in the power of Jesuit education, research and health care to change lives.