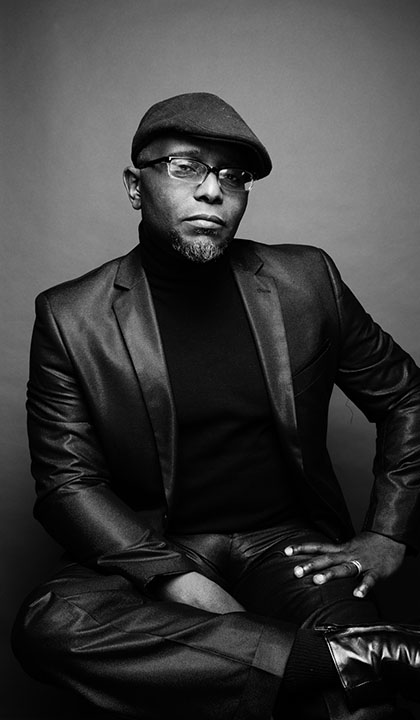 Tyehimba Jess will be visiting writer for the inaugural Georgia K. Johnston Residency in the Department of English. Events will include a public reading and talk, as well as discussions with our students in creative writing.

Jess is the author of two books of poetry, "Leadbelly" (2005) and "Olio" (2016). With ambitious manipulations of poetic forms, as well as multiple characters and voices, "Olio" presents the story behind American blues, worksongs and church hymns. Part fact, part fiction, this book weaves sonnet, song and narrative to examine the lives of mostly unrecorded African American performers directly before and after the Civil War up to World War I. "Olio" is an effort to understand how they met, resisted, complicated, co-opted and sometimes defeated attempts to minstrelize them.

"Olio" won the 2017 Pulitzer Prize, the Anisfield-Wolf Book Award, The Midland Society Author’s Award in Poetry, and received an Outstanding Contribution to Publishing Citation from the Black Caucus of the American Library Association. "Leadbelly" was a winner of the 2004 National Poetry Series.

Jess, a Cave Canem and NYU Alumni, has received a Literature Fellowship from the National Endowment for the Arts, a Whiting Fellowship, A Guggenheim, and a Lannan Literary Award in Poetry. He is a Professor of English at College of Staten Island.

For more information, contact Devin Johnston in the Department of English.

The Georgia K. Johnston Writer-in-Residence program is made possible by a generous bequest from a former faculty member in the SLU English Department. Professor Georgia Johnston died in 2017 after a long illness.  She was a specialist in modernist literature and LGBTQ culture and theory, as well as an accomplished poet.