Building a Dynamic Organization in a Fast-Moving and Competitive Marketplace

Featuring Ron Kruszewski, Chairman of the Board and CEO of Stifel Financial Corp.

Today's marketplace moves faster than ever. Whatever your industry, competition is fierce. Organizations must anticipate challenges and respond quickly to seize opportunities. Since 1997, Ron Kruszewski has led St. Louis-based global wealth management and investment banking company Stifel Financial Corp. His business plan over the last 25 years to build a dynamic organization by attracting the best people to work with the firm has achieved incredible success. During Stifel's quarter century of commitment to this plan, the firm grew from $102 million to $4.7 billion in revenue, from $35 million to, recently, approximately $8 billion in market capitalization.

Join the Chaifetz School for the Edward Jones Dean's Speaker on September 15 as Mr. Kruszewski shares his insights for building talented teams and impactful organizations that drive success. 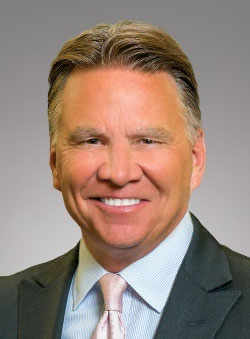 Active in community affairs, Mr. Kruszewski serves as a member of the Chair’s Council for Greater St. Louis Inc. He is also past Chairman of the Board of Directors of Downtown STL, Inc. and past non‐ executive Chairman of the Board of Directors of Angelica Corporation. In addition, he is a member of the St. Louis Chapter of the World Presidents’ Organization. In 2019, Mr. Kruszewski won the Horatio Alger Award and was selected for membership in the Horatio Alger Association of Distinguished Americans, which honors individuals who have overcome adversity to achieve success and who have demonstrated commitment to higher education and charitable endeavors. In 2019, he was also invited to join The Wall Street Journal’s  CEO Council, a network of more than 200 global influential business leaders that focuses on the economic and social issues facing the future.

Complimentary, covered parking is available in the University's Laclede Garage located at 3602 Laclede Ave. for event attendees entering the garage between 6:00 and 8:00 a.m. and exiting between 9:00 and 10:30 a.m. Metered, street parking is also available near the Chaifetz School along Lindell Blvd. and N. Spring Ave.