Located on the first floor of Padre Arrupe Hall, the Office of the Registrar is responsible for registration, academic record-keeping and distributing transcripts at Saint Louis University ― Madrid Campus. 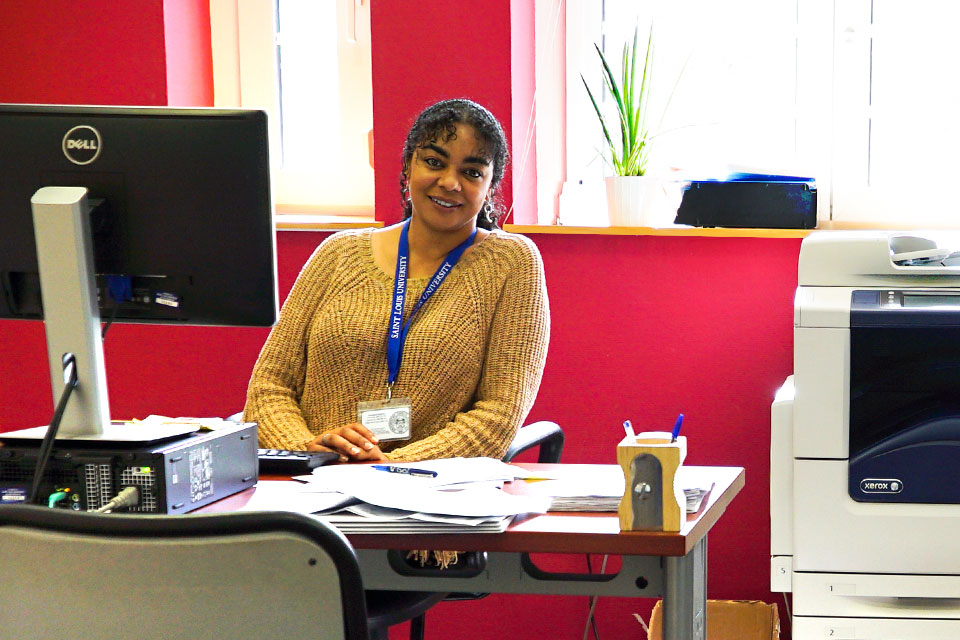 Students use the online database Banner Self-Service to access their class schedules, transcripts and grades.

The Family Educational Rights and Privacy Act of 1974 (FERPA), as amended, is a federal law giving certain rights to parents or students regarding education records at schools of every level receiving funding from the U.S. Department of Education.

At the postsecondary-school level, the rights afforded by FERPA pertain, in general, to the student rather than the parent.

The form below allows students to give consent for SLU to release their information to parents or others.

Born in California and raised in Madrid, Patricia Blockmon studied one semester at SLU-Madrid before transferring to the University of Maryland, where she obtained a master's degree in computer systems management. After working in the computer department of the International Monetary Fund, in Washington, D.C., for six years, she moved back to Spain. She continued working in IT at a translation company here in Madrid until 2006, when she came on board at SLU-Madrid. Initially part of the admissions team, she managed the content of SLU-Madrid’s website, and later became the Registrar.

Blanca Santonja studied at the Complutense University in Madrid where she obtained a bachelor's degree in advertising and public relations. After a few years wandering the world, she began pursuing a postdoctoral degree in English at Saint Louis University which she will finish in the summer of 2022. She has lived in Madrid, Australia, and several U.S. cities, including six years in St. Louis, MO, where she taught several undergraduate courses ranging in topic from research and rhetoric with an environmental focus, to literature courses on gender and identity, technology and media, and faith and doubt. She has also worked in the Ong Center for Digital Humanities where she advised researchers on how to create and manage digital humanities projects and put together the Lightning Talk Series where faculty and graduate students across the humanities could come together to share their experiences and their research.