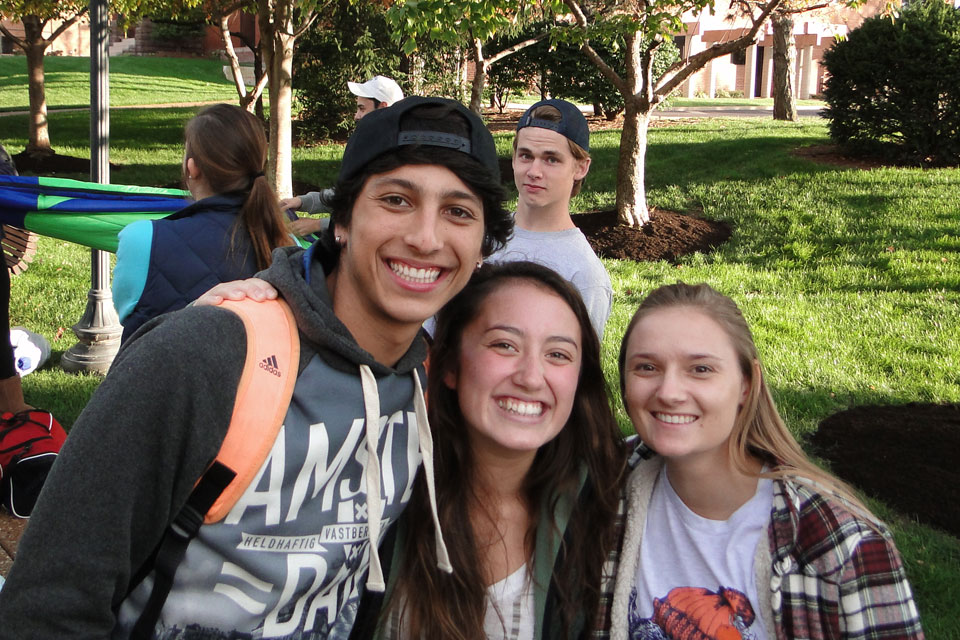 Micah first-year students prepare to leave for their retreat.

Can I be in the University Honors program and the Micah program?

Yes. Each year the Micah program accepts students into our first-year community who are also in SLU's Honors program.

Though core requirements can vary by school, Micah classes can usually be counted toward students' graduation requirements. In most cases, the Micah program does not add more academic requirements.

Can I be a Micah student if I’m not Catholic?

Yes. The Micah community is interfaith and includes students from a variety of religious backgrounds and denominations.

What role does faith play in the Micah program?
All first-year Micah students are required to attend weekly community hour meetings that often include interfaith prayer in an effort to build a community of shared concern and support. You will also find some faith-related activities and prayer while attending the Micah retreats.  Students from all faiths and all areas of study are invited to apply for the program.

Where do Micah first-year students do their service?

We work at  service sites in urban communities near campus. This service focuses on building relationships with the people who work at the organizations, those who are being served, and other Micah students.

Most service-related requirements on campus can be fulfilled through the Micah program.

How do I get assigned to a service site?

You will be provided with a schedule of service opportunities and choose your top three preferences based on your interest and your availability. Micah program staff will try their best to give you your top choice.

How will I get to my service site?

The Micah program provides vans for weekly service and for other Micah events. Students in the program who are verified by the University drive the vans. There are no additional costs to Micah students for this transportation. As long as you complete the driver's verification process and follow all guidelines, you will be covered by SLU's insurance.

Are the places where you serve safe?

Our highest priority is to ensure that everyone stays safe. Although no American city is without potential dangers, the neighborhoods where we serve are stable and our sites are well-run. We do, however, focus on having an older and experienced student in each service group, ask first-year students to never go to service sites alone, and require them to always take the vans directly to service sites and back.

What other service opportunities does Micah offer?

Where do Micah students live?

First-year Micah students and their Micah sophomore mentors live on the fifth through eighth floors of Marguerite Hall in the Micah learning community.

What do I do if I have applied for other housing and am then accepted into the Micah Program?

What is the history of the Micah program?

In the mid-1990s, Michael Garanzini, S.J., SLU’s academic vice president at the time, proposed  strengthening students' connections between residence halls, classrooms, the University and the surrounding urban neighborhoods. The program celebrated its 20th anniversary during the 2017-18 school year.

In 1997, the Micah program accepted its first class of students under the direction of its first director, Donald Stump, Ph.D.  Stump served as director for over 20 years. In 2018, Olga Arbeláez, Ph.D., became the current director of the program.

You can apply to the Micah program through the SLU Office of Admission. If you have already applied to SLU, you can log back in and continue to the Micah application.