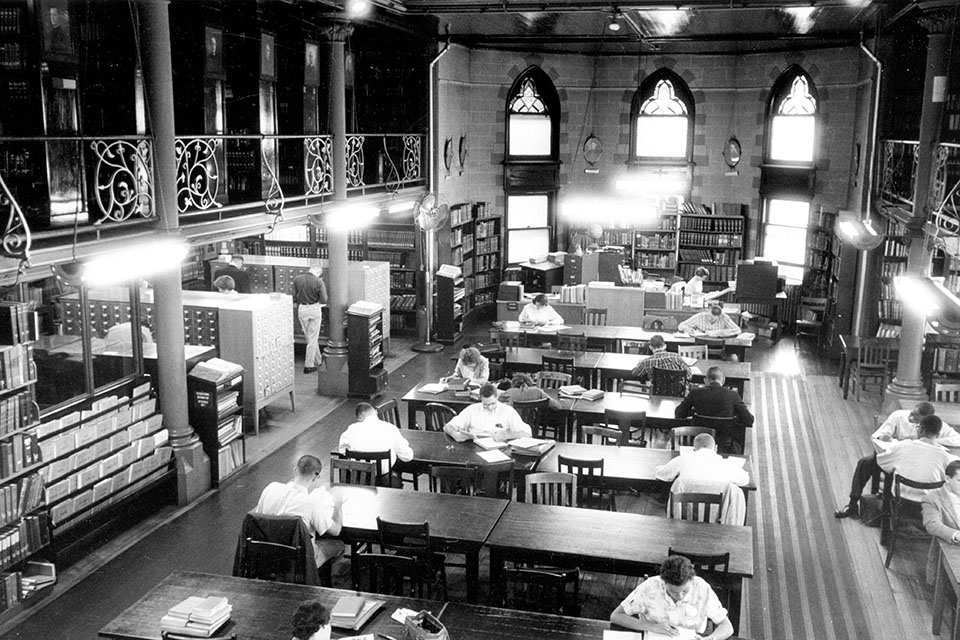 Its great timber supports were once illuminated by the sun streaming through an atrium that has long since been removed and the cast iron columns and spiral stairs supporting each level once held library stacks. Each level is now used as gallery space for the exhibition of Saint Louis University's collection of art with religious themes.

Works Displayed in the Gallery

Entering from the second floor of DuBourg Hall, visitors to the Pere Marquette Gallery find many works brought to St. Louis by the Reverend Pierre Jean De Smet, S.J., in 1845. These Old Master and devotional works were the legacy of the destruction and disruption of the Napoleonic wars, collected from abandoned and war-torn places.

The mother of a De Smet classmate, the Baroness Elizabeth De Ghyseghan, and her friends gathered paintings and books to support the efforts of the Belgian Jesuits in St. Louis. These works are found here, at the Historic Samuel Cupples House and in the Collection of the Western Jesuit Missions at the Saint Louis University Museum of Art. Altogether these works constituted the first art collection of St. Louis and were originally all found installed on the walls of DuBourg Hall.

Other works have been donated to the university over the years. Of particular interest is St. Francis of Assisi by Ludovico Cardi da Cigoli (d. 1613), a gift of Elizabeth Christy Benoist. Like his contemporaries Annibale Carracci and Caravaggio, Cigoli rejected the technically proficient but distant mannerist style of his day. Cigoli's St. Francis of Assisi shows a moment of the saint's experience where emotion and motion are caught, unveiling a complex and dynamic man of faith.

Religious images speak to the heart in the Christian tradition. The third and fourth levels of the Pere Marquette Gallery illustrate expressions of Christian devotion from three very distinct cultures: Retablos, oil painting on tin from colonial Mexico, Greek and Russian Orthodox icons from the 16th and 17th centuries, and Santos images from the Philippine Islands.

The works throughout the gallery are complemented by stained glass windows designed by Rodney Winfield and installed when the space was renovated in 1995.

Today, the Pere Marquette Gallery serves the University, reminding all of the rich and varied ways that the human spirit seeks to express transcendence through artistic expression.