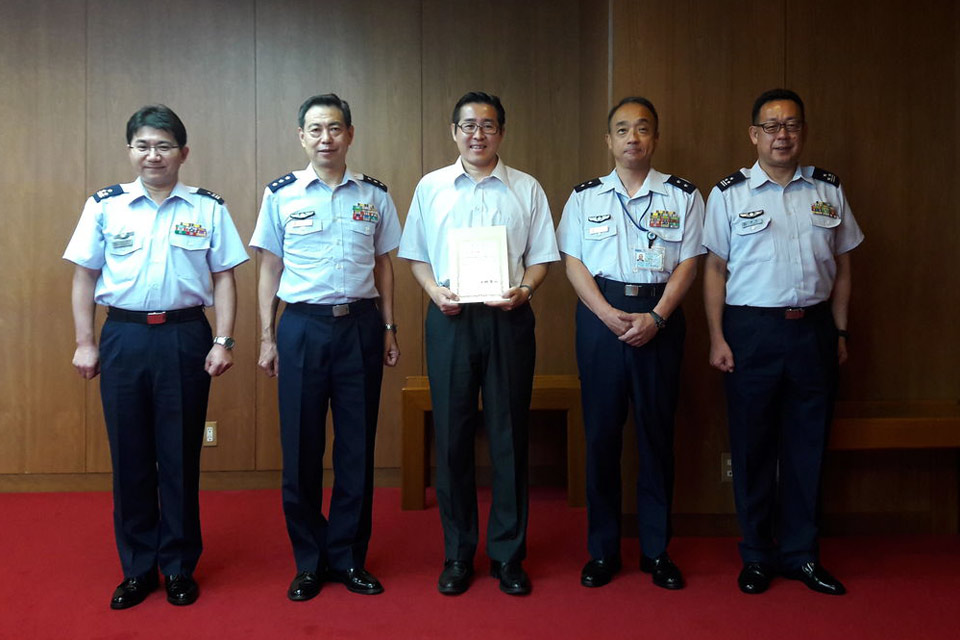 His experience as a civilian professor in the armed forces at the Air War College and as a non-resident fellow at the Modern War Institute at the U.S. Military Academy at West Point gives him a unique perspective to share with his students.

As is the case with many academics, summer break isn’t just a time for family vacations and leisure activities but an opportunity for some extended research, study or scholarly pursuits.

For Katagiri, that opportunity included participation in the U.S.-Japan Network for the Future, a program sponsored by the Maureen and Mike Mansfield Foundation in Washington, D.C.

The two-year program is designed to build and enhance a network of Japan specialists that can bring diverse expertise to the bilateral policy-making process, leading to more vigorous dialogue and research on topics of immediate concern. It aims to strengthen the U.S.-Japanese relationship through cooperation and shared goals in the global arena.

“The program helps scholars of U.S.-Japan relations to get to know each other, socialize, conduct on joint scholarly and professional activities, and network,” Katagiri said. “It is important to professionally network for the type of research I do, especially because it is not always easy to get into the military circle, but once you are in, your colleagues are going to cherish the network with you.”

In August, Japan’s Air Self-Defense Force held a ceremony for Katagiri to formally confirm him as the inaugural visiting research fellow of Air Staff College at Meguro Base, Tokyo. He had follow-up meetings with several defense officers, including former chief of joint staff General Shigeru Iwasaki, to discuss his book project about Japan’s military power.

Katagiri also spent time in Singapore, Indonesia and Myanmar during the summer months. In Myanmar’s capital, Nay Pyi Taw, he met with an army colonel in charge of education and officer training at the Ministry of Defense and discussed Myanmar’s foreign policy and security.

“The meeting turned out to be highly fruitful for my research on Myanmar’s military,” Katagiri said. “This is where scholarly access is highly limited in a country that is slowly opening up, and I was able to both confirm and reject some existing ideas about the country’s security policy.”

In Yangon, a major city in Myanmar’s south, he also discussed his ideas with two professors of international relations at the University of Yangon.

“The conversation was substantive,” he noted. “I gained some new ideas about how people in Myanmar see China, the U.S. and themselves. And we also had a fun chat about presidential candidates in the U.S.”

About Nori Katagiri, Ph.D.
Katagiri received a B.A. from the University of South Carolina, a Master of International Affairs from Columbia University, and a Ph.D. in political science from the University of Pennsylvania. He joined SLU after five years of federal service teaching at the Air War College, a joint military graduate school for senior officers and officials of the U.S. government, and international officers at Maxwell Air Force Base.

In 2015, he received the Meritorious Civilian Service Award from the Department of the Air Force. He also won the Teaching Excellence Award from Air War College.

Katagiri's research focuses on irregular warfare, military strategy and East Asian security. His book, "Adapting to Win: How Insurgents Fight and Defeat Foreign States in War," was published in 2015 by the University of Pennsylvania Press. He is working on his second book about Japanese military power and East Asia and has been a visiting fellow in Taiwan, South Korea, the Philippines and Japan. His research has been supported by the U.S. Air Force Institute for National Security Studies, Air War College, RAND Corporation, Smith Richardson Foundation and Matsushita International Foundation. His articles have been published or are forthcoming in Asian Survey, Small Wars and Insurgencies and Harvard Asia Quarterly, among other journals.