Friendship, food and fashion have been cornerstones of Saint Louis University’s Muslim Students' Association this fall. 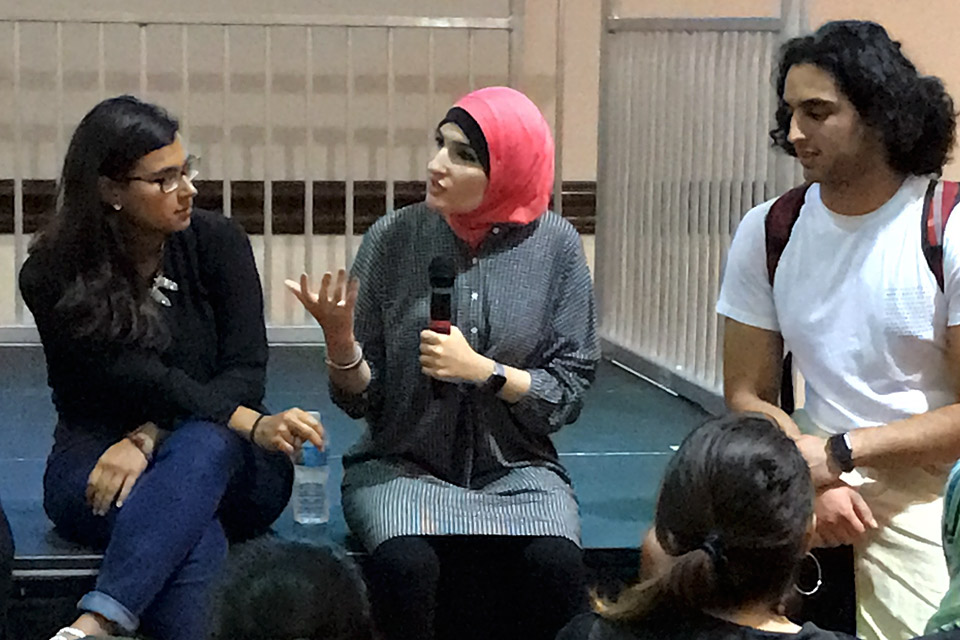 Linda Sarsour, executive director of the Arab American Association of New York and co-founder of MPOWER Change, (center) talks with Daniela Feliciano (left), Raamish Saeed (right) and other SLU students after her formal presentation at the feast ending the Muslim Student Association’s Fast-a-thon.

On Nov. 2, the organization, which has around 65 members, hosted its annual Fast-a-thon, welcoming upwards of 200 guests to participate in a day-long fast and then gather for a meal. The goal of the Fast-a-thon is to encourage the SLU community to fast for a day in solidarity with those less fortunate, as well as provide a chance to see what it’s like for Muslims to fast during Ramadan.

The event also was an opportunity to hear Linda Sarsour, executive director of the Arab American Association of New York and co-founder of MPOWER Change, the first Muslim online organizing platform.

The recipient of the Obama administration “champion of change” honor, Sarsour has been named one of the 500 most influential Muslims in the world by the Royal Islamic Strategic Studies Center, which is a Jordanian think tank. She is a modern civil rights leader and co-founder of Muslims for Ferguson.

During her talk, Sarsour addressed the Black Lives Matter movement, the Dakota pipeline proposal and the 2016 elections. Maariya Ahmed, president of the MSA, said the event was a success not only because of the large turnout but also because Sarsour was inspiring.

“What she said truly resonated with me,” Ahmed said. Ahmed noted that through her words, Sarsour made clear that her involvement comes from her faith. She told Ahmed:
“I stand for what I believe in because I am Muslim. Often times, you will hear people explain Islam as a religion of peace, and it's true. I'm not really moved by that, that's not why I'm so proud to be Muslim. I believe all faiths are religions of peace. But what moves me about Islam is that Islam is a religious of justice and in Islam when we say justice, justice is not just us."

The event marked just one aspect of the many activities that the MSA offers throughout the year. Earlier this fall, the association offered the SLU community the opportunity to experience the many flavors of Islam. Those who stopped by tasted free samples of falafel, hummus, pita bread, samosas, kebabs and gulab jaman, Ahmed said.

“We have food that is from the Middle East, India and Pakistan,” Ahmed said. “At the Food Festival, people got a little taste of Islamic countries.”

The Food Festival was the culminating event in Islam Awareness Week, which included the Carnival on the Quad. The MSA spun sugar into cotton candy, distributed pamphlets and interacted with other members of the SLU community in hopes of “breaking misconceptions about Islam,” Ahmed said.

“We are here to raise awareness about Islam,” she said. “Anyone who has questions is welcome to ask us questions and learn more about Muslims.”

The MSA also sponsors an Eid Dinner to welcome students back to campus at the beginning of the academic year, a winter conference in February and Hijab Awareness Day, for which the association partners with the Hindu Student Community and the Indian Students Association.

Isha Pathak, a senior biochemistry major, said that event is her favorite of the year.

“Seeing women of different faiths try on the hijab and experience what it is like to be a hijab-wearing woman for a day is very inspiring,” she said. “At the end of the day, these women share their experiences at the reflection event. This meaningful dialogue allows members of MSA to speak and educate non-Muslims and invites them to experience this one aspect of Islam.”

Pathak is a practicing Hindu and vice president of SLU’s HSC, as well as a member of the MSA.

“We have non-Muslims in our organization,” she said. “They are students of other religions and they are extremely supportive. That is what I have found at SLU from my freshman year, on.”

Ahmed believes that 100 to 200 SLU students identify themselves as Muslims, and that the Muslim Student Association has between 60 and 70 active participants, several of whom are of various religions.

A senior studying marketing, Ahmed said that this year, the organization has focused its efforts on creating an opportunity for open dialogue. It is that desire to share that brought Pathak to the MSA. In the four years she has been involved with the MSA, Pathak said she has enjoyed its friendly nature and exchange of ideas.

“My favorite part of being a member has been the openness and acceptance that I have experienced. Pathak said. “Everyone in the organization has been welcoming and warm, never treating me differently because I'm not Muslim. The strong sense of community and togetherness that MSA provides creates this sense of family and belonging.”

Pathak said being a part of the MSA has enriched her experience as a Billiken.

“I have had the opportunity to learn about Islam and share my own beliefs and Hindu practices,” she said. “As the vice president of Hindu Students Community, another faith based organization here at SLU, I think it is important to have these strong interfaith relationships where both parties can learn from and about each other.”

Ahmed said the culture at the University has been supportive. She points to the Oath of Inclusion as a guiding document that has shaped the culture and provided a framework in which the community

“People here at SLU – the professors and administrators and the students – they are so open to Muslims,” she said. “It is a blessing to receive so much support, understanding and open-mindedness.”