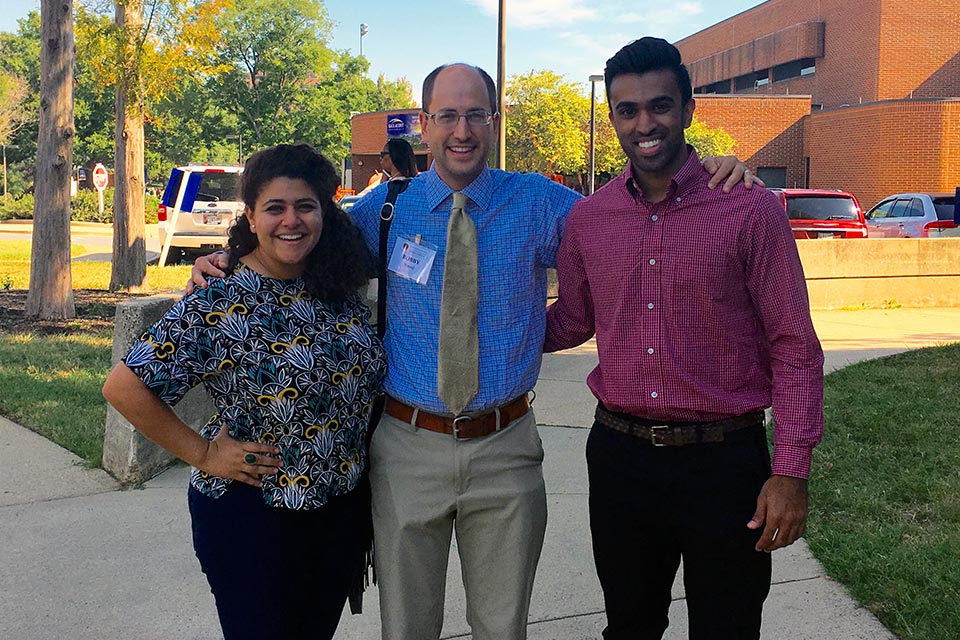 Bobby Wassel, assistant director of the Center for Service and Community Engagement, with two alumni in attendance at the annual President's Interfaith and Community Service Campus Challenge gathering Washington, D.C.: Suraj Arshanapally ('16) (right), now a graduate student at Yale, who presented on Eastern religions and mental health, and Merette Khalil ('16), who attended representing the Sisters of Loretto, with whom she is currently doing a year of post-graduate service.

Being named to the honor roll is an award given to fewer than 5 percent of institutions nationwide, and is the highest federal recognition a school can achieve for its commitment to service-­learning and civic engagement.

Additionally, SLU received the "Distinction" Award in the areas of general community service and interfaith service, and was the only campus in the state of Missouri to be named to the honor roll with distinction for both.

The centrality of community service to SLU's identity is present at every level."

Bryan Sokol, Ph.D., director of the Center for Service and Community Engagement

"What really sets SLU apart from other institutions is the sheer scope and diversity of community engagement options that exist here – from large-scale, university-wide service days like Make A Difference Day to smaller student organizations like Labre that create intensely personal relationships with some of the most marginalized members of our community," said Bryan Sokol, Ph.D., director of the Center for Service and Community Engagement.

"The centrality of community service to SLU's identity is present at every level – from the numerous faculty who are engaged in community-based research involving their students, to the critical support given to Centers like ours or to SLU's chief diversity officer," Sokol continued. "All of this speaks to the genuine commitment of our campus community to the ideals of service and solidarity."

The honor was announced at the annual President's Interfaith and Community Service Campus Challenge gathering, held in Washington, D.C. Sept 21-23. U.S. Secretary of Education John King and CEO of the Corporation for National and Community Service Wendy Spencer were among the many distinguished presenters at the conference.

For more information on service and community engagement at SLU, visit the Center for Service and Community Engagement webpage.