There is no question that data drives much of the decisions in higher education today, so when Saint Louis University’s computer science professors noticed a significant uptick in enrollment in their classes, they reviewed the data and worked with administrators to determine outcomes. And as of July 1, the new Department of Computer Science was created. 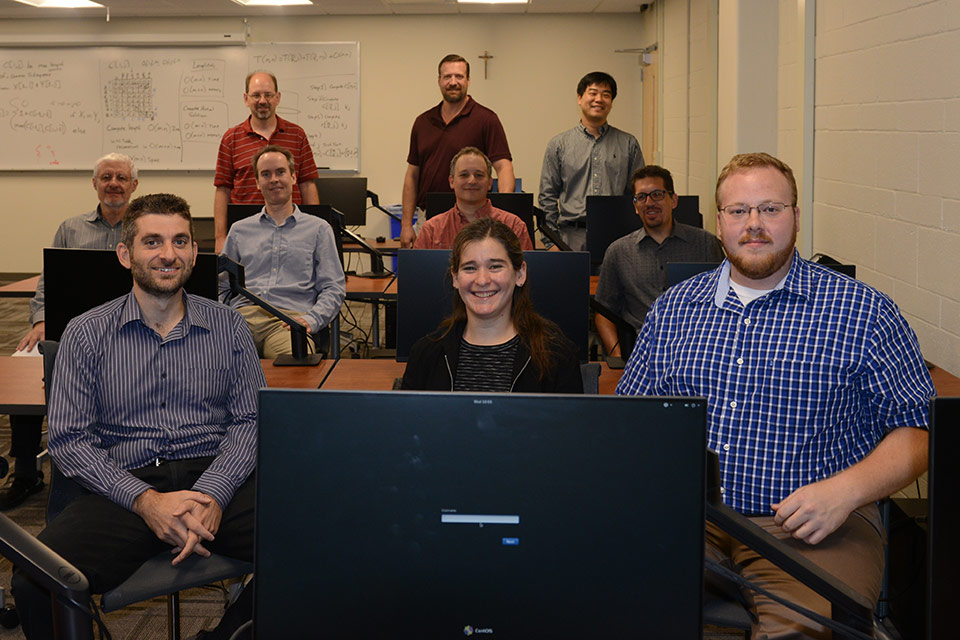 “In terms of teaching, we have witnessed seven consecutive years of increase in student credit hours taught in computer science, going from 1,010 credit hours in academic year 2008-09 to 1,815 hours in 2015-16,” he said. “Furthermore, fall 2016 enrollments are currently 15 percent higher than fall 2015, so it seems we're headed to an eighth year of increased enrollments.”

One of the reasons behind the surge in interest in computer science has been the increased use of data across disciplines, Goldwasser noted.

“In terms of number of students majoring in computer science, we had 41 primary majors in the 2008-09 census and will have 115 primary majors in this fall's census: a more than 180-percent increase in majors over an eight-year period. “There are also current SLU undergrads combining a computer major with a second major.”

Those second majors range from the expected STEM fields of mathematics, physics, geology and psychology as well as engineering with a focus on biology, computers and electrical. But they are not alone. Computer science draws arts and humanities students majoring in communications, criminal justice, English, music, Russian studies, Spanish, theology and theatre.

Along with enrollment numbers, research has driven some of the decisions, Goldwasser said.

“We have seen a huge uptick in sponsored programs, with our faculty currently overseeing $1.9 million in externally funded projects, and with more than $1.3 million of that being awarded in the most recent 12 months,” he said.

I would like my future agenda to be full of solid technical work that has concrete social and compassionate impacts."

“The success has included both senior and junior faculty members, with Ted Ahn joining us in fall 2015 and already principal investigator on three awards totaling $200,000, and Flavio Esposito joining us in fall 2016 and having just received a three-year National Science Foundation award for $200,000.”

Esposito’s presence at SLU allows for new coursework to be offered.

“I have always wondered why the former math and computer science department didn't have anybody teaching what I know best – networking,” Esposito said. “While enjoying working for Exegy, I realized I wasn't ready to leave the academic world.”

Esposito said that he sees so much potential for computer science students even before they graduate to not only become successful, but to alter the dynamics of the current web formats.

“Just to mention an example, the code behind WhatsApp, which Facebook acquired for $19 billion, can probably be written by a computer science sophomore during a class project,” Esposito said. “It's true; many students won't have such a big idea, but let's look at U.S. Labor and Statistics. If we exclude jobs that are not usually given to ‘just graduated,’ software developer is the most profitable job among the list of ‘occupations with the most job growth in U.S.’"

Espositio also points to the advantages the new department offers SLU. “Almost all sciences leverage computational skills,” he said. “Why not having the experts in your team?”

Along with Esposito, instructor David Ferry, a doctoral candidate in the final stages of his matriculation, represents an expansion in faculty in the new department. Ferry said he jumped at the chance to teach at SLU when he heard the University was seeking computer science faculty.

“I'd always heard good things about our computer science brethren down the road at SLU. I knew that several of their faculty had done (and are still doing) good research,” Ferry said. “Their research output is especially impressive considering the size of the department – it indicated to me that they are very engaged and would be great colleagues. That, coupled with SLU's focus on excellent teaching and small class sizes made the university very attractive to a would-be faculty member.”

SLU’s Jesuit mission and its approach to education also influenced his decision.

“I like that SLU is a mission-driven institution and that its students respond to this,” Ferry said. “Too often in technical disciplines we just build better technology for the sake of better technology. I would like my future agenda to be full of solid technical work that has concrete social and compassionate impacts, but it's something I am still struggling with. I will be very excited to work with students when they propose these kinds of projects.”