ST. LOUIS – A multipronged approach that improved mental health among Saint Louis University students during their first year of medical school could serve as a model for reducing stress and depression later in their training, says the author of a commentary in the September issue of Academic Medicine.

“It’s an antiquated idea that what doesn’t kill you makes you stronger,” Stuart Slavin, M.D., M.Ed., associate dean of curriculum for SLU School of Medicine, says. “For far too many in medical school it simply makes them burned out, anxious and depressed.” 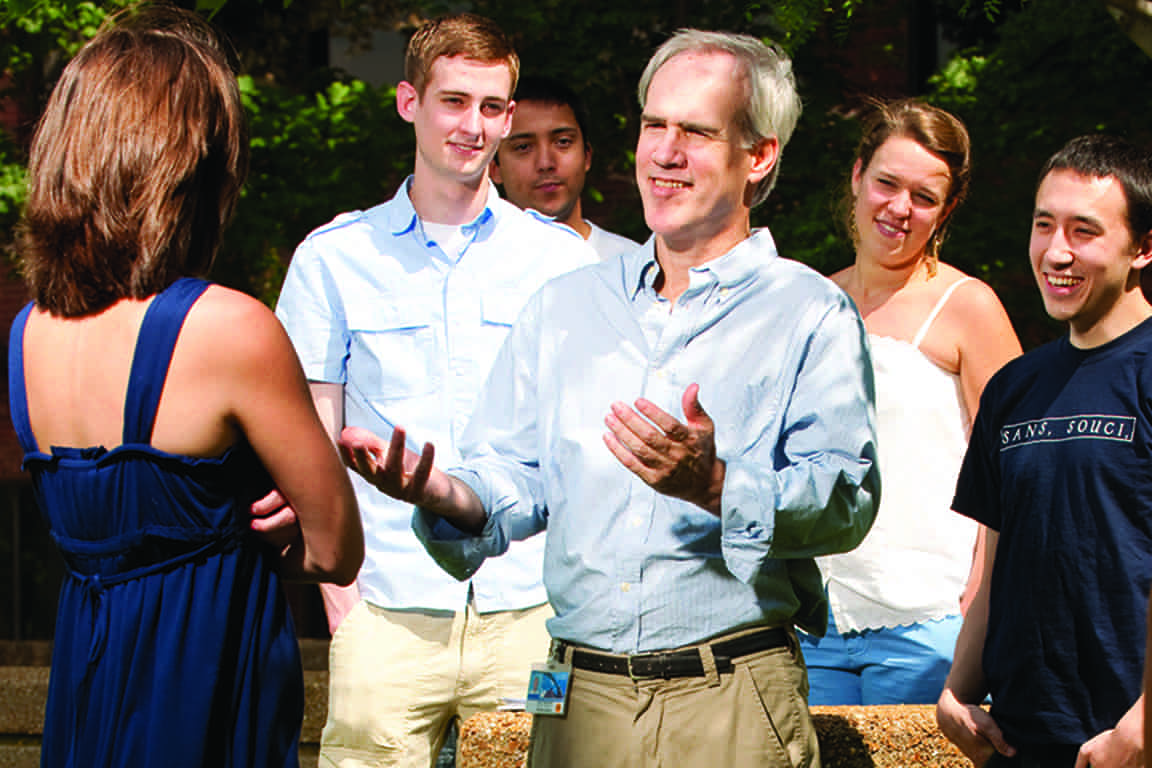 Stuart Slavin, M.D., associate dean of curriculum for the School of Medicine, shares some sunshine with medical school students.

Enormous strides have been made at SLU in recent years. The mental health of the most recent first year classes of Saint Louis University medical students was better after they completed the first year of medical school than before they started taking classes, Slavin said.

In 2009, SLU began making changes to its medical school to reduce depression and anxiety among its students.

“We created an environment where students don’t suffer unnecessarily. It’s about making reasonable demands on students whenever possible, treating them with the respect they deserve and giving them a voice in how decisions are made,” Slavin said. “What we’re giving them is a sense of what the world should look like.”

SLU attacked anxiety and depression on several fronts by:

“With careful attention, we created an educational environment that nurtured rather than punished, that challenged but did not dispirit. It’s also important to note that making the changes didn’t require huge budgets and radical curricular transformation,” Slavin said.

Depression and anxiety rates for second year students in the classes after the curricular changes were lower than for those in medical school before the changes. However, rates began to go up as students prepared to take their first standardized test that helps determine where they will be admitted for residencies, which is the education step after medical school when doctors study the specialty field of their choice.

“As the competition for residency rises, the pressure on students across the country to do well on the Step 1 exam is likely also increasing,” Slavin said.

External stressors during the third and fourth years of medical school, when students began rotations through multiple hospitals and interacted with patients and hundreds of residents and physicians, took a further toll on the mental health of medical students during their clinical years, he said.

“These external interactions are no different from those students in any medical school would experience,” Slavin said. “Physician burnout -- driven by bureaucracy and red tape, mind boggling requirements for documentation and higher demands for productivity -- is at a crisis level, and having an impact on medical school students.”

In addition, students faced the inherent stress that accompanies making a decision that will impact them for the rest of their medical career -- choosing a residency that determines the area of medicine they will specialize in. The stakes are high, the application and interview process is grueling, and stiff competition could prevent them from getting the choice they want and the location where they want to study.

“Until we are able to change the conditions at the institutional and national levels, we may not be able to significantly enhance the mental health of our students in the clinical years,” Slavin said.

“We are unlikely to ‘resilience our way’ out of this problem. Instead, multipronged interventions are needed that not only help individuals but also reduce the toxicity of the educational and clinical environments.”