Maurice Green, Ph.D., a researcher at Saint Louis University for more than six decades and among the first scientists to use viruses to shed light on what goes on inside cells, died on Tuesday, Dec. 5, after an illness. He was 91. 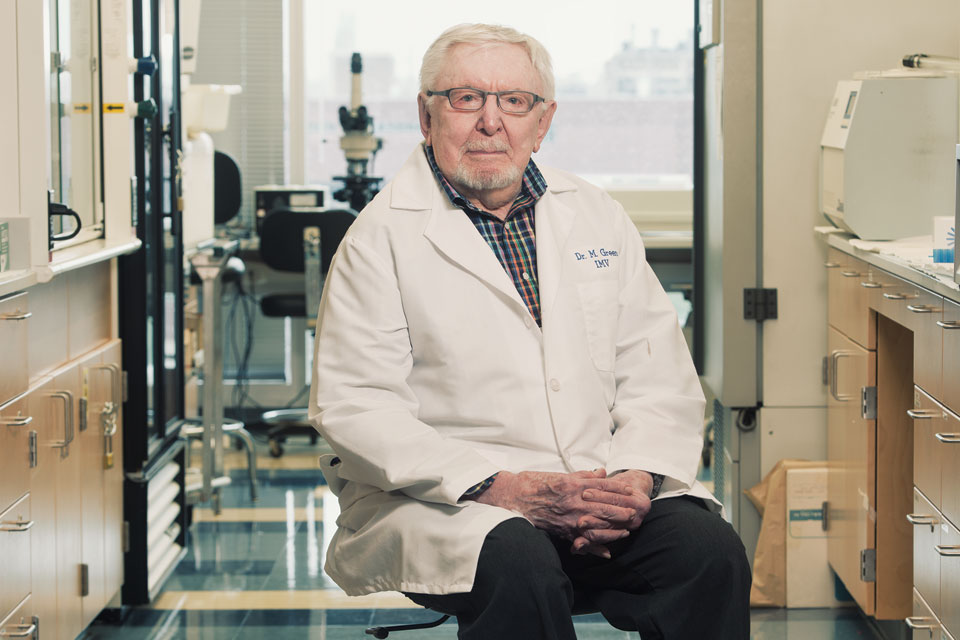 Green was a pioneer in using viruses as a probe to understand the biology of normal cells and how cancer works on the molecular level. He studied the adenovirus, and through his lab, developed the first working model of the virus. His interest in science began when he was stationed in the Philippines during World War II, and said he had nothing to do but read about medicine.

Green coined the term “molecular virology,” and the techniques developed in his lab contributed to the evolution of the field into an integral part of medical education. He pioneered the methodology used to better understand how to study viruses, what viruses are, and how viruses infect cells to convert them into a factory of replication.

“For over 45 years, Maurice was my boss, my mentor, my colleague and my friend,” said Paul Loewenstein, assistant research professor. “He taught me the excitement of science – that science was fun, seeking knowledge was fun, looking at data for the first time was a thrill.

An important note that says volumes about Green:  His current CV of well over 300 papers does not yet include the most recent one to be published in Genes & Cancer.

“We received notice of its acceptance last Tuesday (the week before Green died).  His colleague Ling-jun Zhao, Maurice and I worked on that manuscript. His fingerprints are all over that paper, which we haven’t gotten back in galleys yet,” Loewenstein said.

Green made those who he worked with at every level understand their contribution to the success of his research team, Loewenstein said.

“Years ago, a dishwasher in the lab worked until she was in her 90s. When people asked why she continued to work, she said she did it because ‘Dr. Green makes me feel like I’m part of the important work that is being done here,’” Loewenstein said.

Green’s research into the role of viruses in cancer was funded by the National Institutes of Health as part of President Richard Nixon’s “War on Cancer.” A guest at Nixon’s signing of the National Cancer Act into law in 1971, Green was given one of the pens used by Nixon. With funding from the NIH and support from SLU, the Institute for Molecular Virology grew into a hub of research activity.

“Maurice attracted ambitious scientists to SLU. When I came aboard, Maurice had 20 post-doc fellows and 60 people worked in the Institute of Molecular Virology. The parking lot was full of eager researchers, working seven days a week,” Wold said.

“Maurice was the head of that dynamism – himself working 10 to 12 hours a day, seven days a week -- and an awful lot of research was conducted in that building. There might have been 10 to 20 people worldwide of Maurice’s stature who studied cancer and viruses, and he was right here at SLU.”

Green was frequently accompanied by one of his “labrador-y” retrievers, who were protective of his work, Wold said.

Green drove fancy cars including a Corvette, and MG and Mercedes, swam every day, loved to fish, maintained aquariums at home and in his office, and taught himself to type at an advanced age so he could use a computer keyboard. He loved electronic gadgets and had a collection of many cameras.

“I never saw any photo albums, but he loved to have the latest camera equipment, technology and gadgets,” Wold said.

Green was an “all-in” kind of person who left a legacy through his research and through his highly successful children who all pursued careers in science and medicine, he added.

Burial will be private.