Mark Buller, Ph.D., one of the nation’s foremost poxvirus researchers and a world-class scientist, was killed Friday, Feb. 24 when he was hit by a car while riding his bicycle. He was 67.

A professor in the department of molecular microbiology and immunology, Buller had been on faculty at Saint Louis University since 1994 and studied monkeypox and mousepox viruses, which are surrogate models for studies on the smallpox virus. Set to retire in 2018, Buller would arrive in his office lab at 5:30 or 6 a.m. and leave at 6 or 7 p.m. on many days. 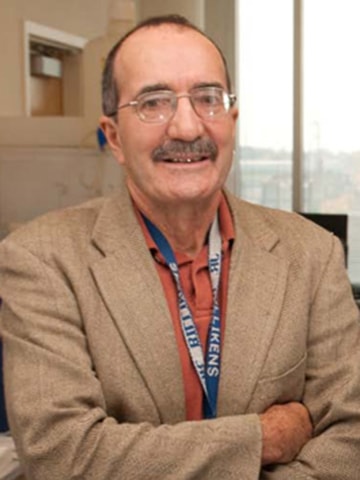 His lab aimed to use poxviruses as vectors to deliver gene therapy, vaccines and anti-viral drugs, and find ways to protect against poxviruses should they be turned into weapons of bioterrorism. He also studied a number of other viruses that are extremely lethal, such as SARS.

“Mark was an upbeat, happy man and had this unbelievable ‘cat ate the canary’ smile,” said Sharon Frey, M.D., professor of infectious diseases, who occasionally worked with Buller on poxvirus research.

“Everybody loved Mark, as a colleague and as a friend. He tried to make sure that people had what they needed to do their research and was very collaborative. And he was an avid bicyclist. He rode his bicycle to work all the time.”

After 9-11, Buller became a sought-after authority on bioterrorism, whose work was described in journalist Richard Preston’s book about biological weapons, “The Demon in the Freezer.” He was a member of multiple national committees and governmental advisory groups, some that advised the intelligence community on biodefense.

“Sometimes he’d disappear for a conference. When he’d come back, I’d ask him where he’d been, and he’d say he couldn’t tell me,” said William Wold, Ph.D., chair of SLU’s department of molecular microbiology and immunology.

The University is a completely different place because of Mark. Much of the research in our department and in the entire school was generated by ideas from Mark."

Although smallpox was declared eradicated in 1980, the Sept. 11, 2001, terrorist attacks triggered new concerns that smallpox virus could be unleashed as a biological weapon. The White House Office of Science and Technology Policy praised Buller’s work in 2003 as critically important to the biodefense of the nation.

Wold credits Buller in helping to shape research at SLU, building upon the university’s strength in virology, immunology and infectious diseases. Buller had vision, energy and ideas and loved to link people to interesting projects that could move science forward.

“The University is a completely different place because of Mark,” Wold said. “Much of the research in our department and in the entire school was generated by ideas from Mark.

“He was always full of ideas for projects, and he would come to me or to any of our faculty and suggest a project, a line of research, something that would be interesting. He was just trying to help people out and was the most altruistic guy you could imagine. My current research program wouldn’t exist had Mark not suggested it, and pointed me in the right direction.”

Buller started SLU’s select agent research program, allowing scientists to study the class of pathogens that could cause serious and potentially deadly illness if inhaled. His work led to SLU receiving a multi-million dollar facility grant from the National Institutes of Health to construct Doisy Research Center with ultra-secure biosafety level 3 labs so scientists could research microbes that cause diseases including tularemia, tuberculosis, monkeypox and H5N1 influenza.

Buller also built the aerosol biology core at SLU, which was used by scientists including Dan Hoft, M.D., Ph.D., director of the division of infectious diseases, allergy and immunology, to study innate and adaptive immunity to tuberculosis in an animal model.

“Mark was a nice guy who really cared about helping people. He always wanted to do the right thing. He helped me tremendously over the years in writing grants, not just as a collaborator providing his expertise, but getting into the details to make our grant stronger,” Hoft said.

He added that he and Buller enjoyed the benefits of being Schlafly SIP Club members, meeting at the brewery on multiple occasions for camaraderie and discounted craft beer.

Buller became a mentor to Scott Parker, Ph.D., after he received his doctorate degree 11 years ago. He offered Parker a job working in his lab and the two cultivated a deep friendship.

“It’s amazing how many people 30-plus years his junior owe their careers, relationships and friendships to him. All I keep hearing is people saying how much they loved and respected him,” Parker said.

“Many, many people have used the terms ‘father figure’ and second father to describe him. He was just a genuine kind and caring man who would do anything for you – be it helping you get the experiment working or helping you cut down a tree with his chain saw. He showed us how humans should behave and his death has ripped a massive hole in all of our lives.”

Wold described Buller as a rainmaker and connector, working behind the scenes in a cheerful and quiet way to make positive change. Buller introduced Wold to James Brien, Ph.D., and Amelia Pinto, Ph.D., two scientists originally from Washington University in St. Louis, because he thought they would fit well at SLU. Wold hired them in 2015.

“Mark was the ultimate team player, a tremendous faculty member who not only had an outstanding research program of his own, but was intent on helping everyone else in the department and in the School of Medicine,” Wold said.

Buller’s helpfulness extended to the service work he performed without fanfare. He was good with his hands and volunteered with Habitat for Humanity. He also was an active member of Our Lady of Lourdes parish’s social concerns committee. He made home repairs for those in University City who needed help but could not afford to pay and served food to those who were hungry at a sister parish, St. Augustine.

“He kept it all to himself,” Wold said.

Buller was a prolific researcher, who had about 175 publications and averaged about five publications a year for the last decade. His work has been published in internationally recognized journals in his field as well as the prestigious journals, Nature, Science, Cell and the Proceedings of the National Academy of Sciences.

(Robert) Mark Buller is survived by his wife Joslyn and children Dawn and Meghan.

In addition, SLU School of Medicine will have a memorial service at a date to be determined.