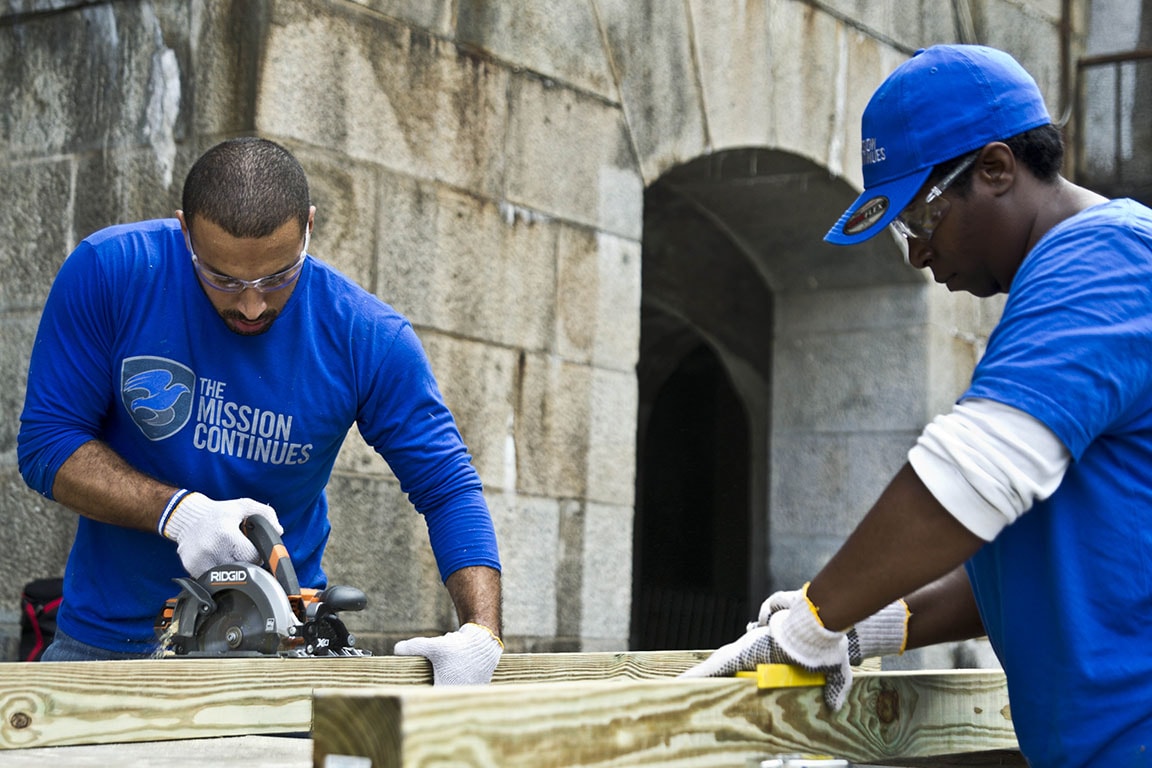 Through The Mission Continues, veterans transition to civilian life by volunteering on community service missions.

“When veterans complete their military service, they go through a transition like all of us, when we change jobs, move to a new town or retire. It is a transition that takes focus, deep reflection and new information to discover the next challenge they will pursue along their journey in life,” said Monica Matthieu, Ph.D., the lead author of the study and assistant professor of social work at Saint Louis University.

“This study tells us that formal volunteering in a civic service program that engages the veterans in community service in their hometown is one option to aid in that transition. Some may call this a gap year; I call it a fulfillment year.”

When we get up and move and that movement is geared toward a purpose of helping others, it is like stepping outside our own lives to focus on the needs of others, and so many positive things come together.”

The research is the first peer-reviewed and published national study of civic service among U.S. military veterans. It examined how volunteering affected the health and social life of U.S. veterans who served in Iraq and/or Afghanistan, then participated in a formal civic service program.

Civic service has accountability requirements, clearly defined goals and a stipend, making it more like a job than less structured forms of volunteering, such as helping out with child care or setting up for a church function.

Researchers evaluated the impact of The Mission Continues, a national nonprofit that deploys veterans on six-month volunteer service missions with community agencies. The organization was founded in St. Louis in 2007 by Eric Greitens, who stepped down as CEO in 2014 and now is Missouri’s governor.

Researchers studied 346 veterans who completed the program in 2011-2014, volunteering 20 hours a week on specific projects for six months. Before deployment on civic service missions, more than 50 percent said they had symptoms of post-traumatic stress disorder and nearly a fifth reported symptoms of depression. Nearly half had reported receiving treatment for a mental health condition.

At the end of their civic service, more volunteers reported they had good or excellent health than before they volunteered. Their emotional health improved; more reported it was easier to perform everyday activities than before volunteering. Their PTSD symptoms significantly decreased, and the number of veterans who had probable PTSD dropped from 50 percent prior to civic service to 43 percent after.

The number of veterans who had symptoms of depression also decreased – from 23.5 percent before civic service to 15 percent after. They said they felt less isolated and lonely, and realized help is available.

“Importantly, even after controlling for current treatment, veterans with positive depression screens when entering the program benefited the most with significant improvements in purpose in life, enhanced social support and decreased feelings of loneliness. Those screening positive for probable PTSD, again, after controlling for current treatment, showed significant improvements at the end of the program.”

She said the actual mechanism of why volunteering improves mental health remains a question.

“One of our theories has to do with behavioral activation and the purpose surrounding the activity. So in other words, when we get up and move and that movement is geared toward a purpose of helping others, it is like stepping outside our own lives to focus on the needs of others, and so many positive things come together,” said Matthieu, who directs SLU’s graduate-level social work education specializing in veteran’s services.

Veterans are eager to find opportunities to serve at home as they rejoin civilian life, she said. Matthieu speculated that for veterans, volunteering allowed them to find meaning and purpose again in life, which prepared them for the transition back to the civilian world.

“This area of science around health promotion programs that make a difference in veterans’ lives is really just starting,” Matthieu said, adding that more research will follow.

Authors of “The Impact of a Civic Service Program on Biopsychosocial Outcomes of Post 9/11 U.S. Military Veterans” are Monica M. Matthieu, Karen A. Lawrence and Emma Robertson-Blackmore. The paper is published in the February 2017 issue of Psychiatry Research.