Rising sophomore Malaya Siy has always been intrigued by religion and faith. Now, through an ongoing digital research project, she and other Saint Louis University students are seeking out the sacred across the St. Louis area and developing their ability to think critically about religion and daily life in new ways. Through their coursework in the Department of Theology, the students have created the first entries in the on-going digital project, Arch City Religion.

"I have always been fascinated by religion and faith and how it really becomes an immovable and important part in people's lives," Siy said. "When looking at theology classes, I really wanted ones that would cause me to gain new perspective, and this one really delivered." 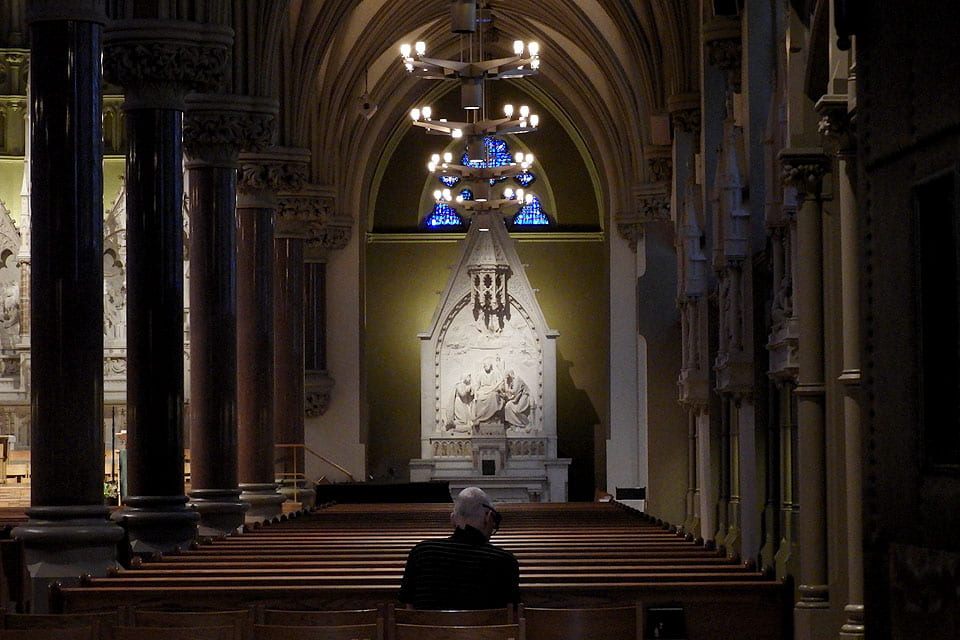 Arch City Religion is the brain child of Rachel McBride Lindsey, Ph.D. Her research focuses on religion and visual culture, passions she wanted to bring to her students in new ways, she said.

"Religion is part of the fabric of the city," Lindsey explained. "I wanted to give students a canvas to paint that larger picture for the outside world. I see it as my job and my responsibility to equip them with a set of tools to critically understand religion in the world."

Formed as part of a course she taught in the 2016-2017 academic year, Arch City Religion includes entries on topics from the International Society for Krishna Consciousness to video interviews with experts on religious art like SLU's Terrence Dempsey, S.J, to the celebration of Mardi Gras in the Soulard neighborhood. Undergraduate students, originally enrolled in Lindsey's classes in the Department of Theology, completed the site's entries and the research behind them. About 120 students worked on the project throughout the year. The digital format, Lindsey explained, also made their work available to the wider community and allowed students to explore art, music, objects and spaces in a unique way.

Rising sophomore Jeff DeMond said the project took him beyond SLU's campus and allowed him to experience religion in the city in a moving, meaningful way. His group's research on the Black Madonna, he recalled, forced him out of his comfort zone while allowing him to go deeper into investigating race and religion.

"This class specifically, was very focused on us learning about how theology influences things like power structures, the government, racism and [more,]" he said. "In broadening our minds to the many intersections of the sources of these themes, we can begin to further understand the effect of them on society and in our own lives. Learning about theology through the lens of social justice really speaks to the University's mission and opens the students' minds to the world around them."

While theology forms a key part of a SLU education, Lindsey and her department saw a need, she said, to take theology beyond term papers. The project's goal is to show students how local and regional issues can be impacted by people's spiritual beliefs and sacred practices, and, as importantly, how religious ideas, beliefs, objects and spaces have shaped life in the city, even for those who don't personally identify as "religious." From street names to where children attend school to the places people go for entertainment, Lindsey explained, there's a story about religion in St. Louis.

Arch City Religion combines rigorous research with work in digital humanities and visual culture, she said, creating a unique learning experience in a discipline that is thousands of years old. St. Louis forms a unique site for this kind of exploration, she continued, because of its reputation as "the city of steeples" and as "the Rome of the West" and because it is home to a wide array of religious traditions.

"They [students] didn't really have a broader sense of the landscape of religion in the city," Lindsey said. "We all know St. Louis is a city of beauty, of cultures, of contradictions - race, class, religion, region."

"What struck me was that this was a need I could fill, that the department could fill," she continued. "This project is a concrete way of taking these abstract concepts and applying them to a project."

In the course of her time with Arch City Religion, Siy recalled debates that continued long after the end of class and site visits that helped students "catch all the little details pointing to religion" that they wouldn't notice otherwise.

"Arch City Religion was definitely an innovative way to discuss religion and theology academically," Siy said. "I think a lot of times we talk in circles about one religion and [its] rules and practices. In reality, religion is so personal and worldwide. It's more than rules and books, but interpretation and practice. The same stories can be interpreted in a hundred different ways and lead people in a thousand different paths."

"The class gave me a fresh appreciation for the grand effects religion can have, how it can mold a city," she said, "I also learned how to ask questions that spark a conversation. I think the greatest lesson I gained from this class is how to earnestly observe. From site visits to research, we were taught to pay attention to every detail and what they mean to the big picture."

Lindsey said she was impressed by the breadth of explorations and the topics that students chose, which made the class as much a learning experience for her as for her undergraduates.

"Through the students' work, I've had the opportunity to meet people of different faiths and faith communities and to think about religion and the ways it relates to our community in new ways, which is really exciting," Lindsey said. "That's not something you always see in religion and theology departments. The level of engagement here is really inspiring as an instructor."