In a field where pawns, queens and knights reign, SLU's chess team has outflanked its competitors, bringing home honors as the top college chess club in the nation from the United States Chess Federation. 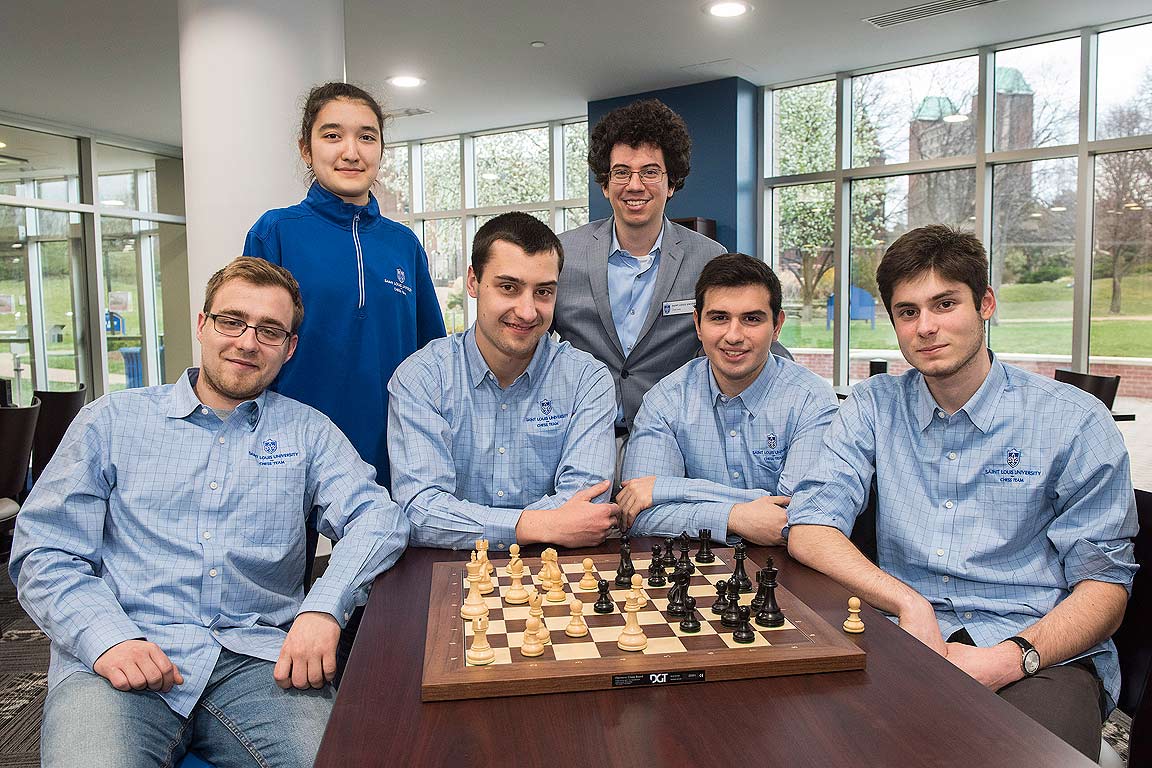 The team poses for a group shot before heading to New York for the President’s Cup. Photo by Steve Dolan

The federation named SLU its "Chess College of the Year." According to coach Alejandro Ramirez, that kind of recognition is unique for such a young club and is due in part to the team's outreach to the St. Louis community.

"The SLU chess team has taken collegiate chess by storm," Ramirez said. "The federation puts a high emphasis on how impactful a team is in both its community and the chess world. SLU, thanks to its partnership with the Chess Club and Scholastic Center of Saint Louis, has had an immense presence in both [areas]."

Beginning as a strategic initiative spearheaded by SLU administrators and alumni including chess enthusiast and SLU trustee Rex Sinquefield (Cook '67), the team has a notable list of achievements including three international grandmasters, one international master, a top four-finish at the Pan-American Collegiate Chess Championship, and third place at the 2017 President's Cup, the Final Four of college chess.

Founded in 2015, the two-year-old club plans to expand from its current five players to 20. Ramirez hopes to clinch a Final Four and Pan-American victory and to secure the top spot as the strongest chess team in the nation.

"The competition is incredibly fierce," he explained, "as teams from around the country aggressively recruit and train for these events."

The recognition by the federation, Ramirez said, also points to the University's support in growing the team as a compliment to SLU's reputation and emphasis on academic excellence and community leadership.

"SLU's commitment to chess is clear," he continued, "from the new team room, to the strength and dedication of its players and the infrastructure that supports them. Chess is a gymnasium of the mind. It is only logical that institutions of higher learning recruit chess players, which have, because of their dedication to the sport, proven their skills in creativity, problem-solving, pattern recognition and many [other skills.] Chess is the ultimate battle of the minds."

The commitment of his current players - Cemil Can Ali Marandi, Nozima Aripova, Francesco Rambaldi and Dariusz Swiercz - also shows in the federation honor.

"SLU has already become one of the most talked-about teams in the nation," Ramirez said. "I would like to point out the dedication that these players have towards both their academics and their chess player career. The team is very close with each other, sharing information, not only about chess novelties, strategies and ideas as they from each other, but also about classes and random topics."

The team will formally reconvene in August and will play an invitational tournament at the Saint Louis Chess Club in September.

Two additional players will join the team this coming school year. New recruit Dorsa Derakshani will attempt to participate in the World Junior Championship, according to Ramirez. Currently, team members have plans to participate in international play in Armenia, Italy and Turkey.

The team will receive its award August during the upcoming U.S. Open and U.S. Chess General Assembly in Norfolk, Virginia.

-Story by Amelia Flood. Portions of this story appeared in "Chess to Impress" by Sarah Hilgendorf with photos by Steve Dolan in the Spring 2017 edition of Universitas.