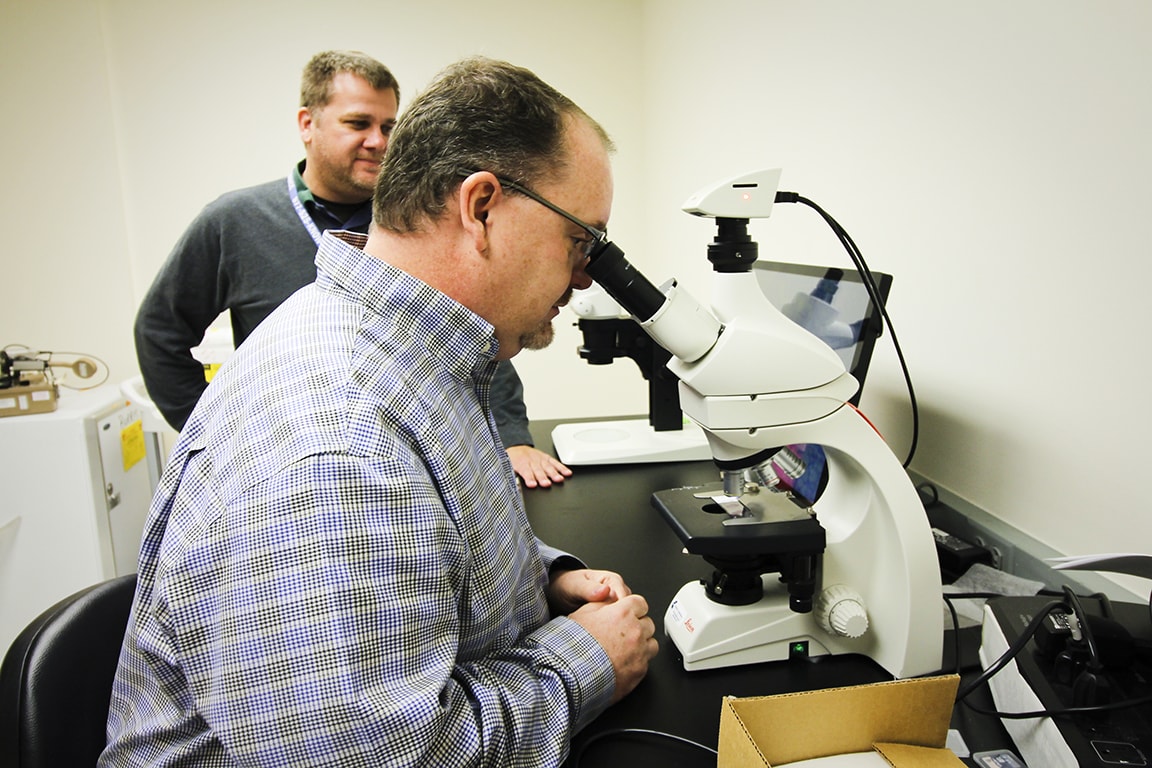 Medicinal chemist John Walker, Ph.D., (background) and pharmacologist Thomas Burris, Ph.D. (at microscope) have received a series of federal grants to advance their research.  In spite of an increasingly competitive funding environment nationally, pharmacology research at Saint Louis University has grown. SLU's ranking in National Institutes of Health funding among pharmacology departments at medical schools has increased by 41 spots, moving from 88th to 47th in just four years. Photo by Ellen Hutti.

With a series of new grants, Saint Louis University researchers will tackle the twin epidemics of diabetes and obesity by tapping into the potential of two nuclear receptors that control muscle metabolism. The scientists will optimize two promising drug compounds, moving a step closer toward capturing the benefits of exercise in pill form.

In past studies, a drug developed by Burris that targets REV-ERB appears to act as an exercise mimic. Genetic studies with ERR suggest that it may be a good target for development of exercise mimetic drugs as well.

Diabetes is the seventh leading cause of death in the U.S. and more than 80 percent of patients with type 2 diabetes are overweight or obese. Aiming to offer new options for patients suffering from the burdens of these health threats, Burris and Walker’s work combines chemistry and biology to develop new treatments.

“We can design drugs rather than just study them,” Burris said. “That’s the fun part. We can take the work further toward developing new therapies.”

Exercise provides health benefits that include improving insulin sensitivity and weight control. But not everyone is able to exercise.

“If you exercise, it’s effectively a treatment for diabetes and obesity as you increase the metabolic rate of muscle,” Burris said. “You develop a more efficient muscle. That’s what you get from exercise. You develop more endurance and that is good for your metabolic function.

“Our drug compounds are doing similar things. They make muscles look like they’re exercising, turning on the genes that get activated during exercise, even if no exercise is happening. Both studies operate this way.”

In a 2013 New York Times article, Burris notes that while no drug is likely to recreate all of the health benefits of exercise, a pill could offer a way to reap the muscle metabolism benefits of exercise for people who are unable to exercise due to disability or ill health.

Burris and Walker study nuclear receptors, which are signaling molecules that sense different hormone levels and regulate gene expression based on the signal they receive. The cancer drug tamoxifen, contraception, a heart failure drug and thyroid replacement therapy all work by targeting nuclear receptors.

“In many cases of illness, signaling is off,” Burris said “And we can correct signals by dialing the hormone messages up or down, mimicking hormones or blocking them.”

In both studies, researchers aim to optimize drug compounds to dial up muscle metabolism.

Burris and his team were the first to use a synthetic agonist (a drug designed to turn the action up) for REV-ERB to show that it caused weight loss and improved metabolic function in animals.

As the research team optimizes the drug for diabetes and obesity, they are looking to maximize some effects they’ve already noticed. In past studies, they’ve seen multiple benefits to the metabolic state, with improved cholesterol and reduced atherosclerosis, including some direct effects on plaques, and lower inflammation. They saw mice lose weight, even on high fat diets, use more oxygen, expend more energy and show greater endurance.

“Nuclear receptors are typically very good drug targets,” Burris said. “However, because they control gene transcription, they are tricky. Though we want to discover how to turn a receptor up or down, it’s important to find a ligand that won’t do too much, which could cause side effects.”

A key task for Walker – a chemist – is to prevent the drug from crossing the blood-brain barrier, the body’s natural division that separates the brain from blood circulating in the body. This is the reverse challenge that many drug-designers face. Often, it’s most difficult to help drugs intended to reach the brain cross the barrier.

However, in past studies, REV-ERB appeared to have effects on the brain, including decreasing anxiety. While researchers would like to tap the receptor’s potential in the mental health arena as well, they also want to ensure that a drug designed to help obesity and diabetes is limited in its scope.

“The effects we see in the brain are not necessarily show-stoppers but since there are some, we want to try to stop the drug from reaching the brain,” Burris said. “We don’t necessarily want to decrease anxiety in someone who doesn’t need it.”

In addition to addressing the blood-brain barrier issue, Burris and Walker look to optimize the compound in other ways, including testing for any toxic properties and developing once-a-day dosing.

In the second study, Burris and Walker will optimize compounds that target a different receptor, ERR.

ERR is an orphan receptor, meaning scientists don’t know what its natural ligand is. A ligand is the molecule that binds to the receptor and regulates its activity. A few synthetic (man made) ligands have been created, but they are not yet perfected for use in disease models.

The SLU researchers will take this work further, aiming to develop methods to turn up the volume on ERR.

“We’ve designed some agonists to see what their effect is,” Walker said. “Most of the data suggests that more ERR is better, the most useful in terms of muscle metabolism. These agonists look as though they’ll be useful in models of obesity and diabetes.”

In addition to showing promise for obesity and diabetes, the study will examine how improvements to muscle metabolism may affect muscular dystrophy.