Mark Wilson, an associate professor in the Department of Fine and Performing Arts at Saint Louis University, died in an accident Sunday, May 28. He was 58. 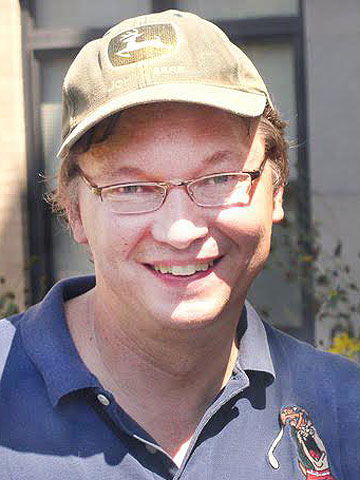 Christopher Duncan, Ph.D., dean of the College of Arts and Sciences, shared the depth of the sudden loss felt by so many.

“In losing Mark, our community has suffered a deep wound that will be felt for a long time to come,” Duncan said. “I knew Mark for a while and found his spirit infectious and I greatly enjoyed the technical prowess he brought to our theater program. It is clear to me that he exemplified the true spiritual meaning of the Magis in every way and that we are a lesser place today as a result of this loss, but a greater place because of his years of service and presence among us.”

Wilson joined the theatre program in the Department of Fine and Performing Arts in 2003, after having worked almost 20 years in professional theater in and around St. Louis, including the Repertory Theatre of St. Louis and Opera Theatre of Saint Louis. He also served as the resident lighting designer for SLU’s University Theatre.

No matter who you were or what your project was, if you asked, Mark would drop everything he was doing to help. He said ‘yes’ to everything; he brought imagination, creativity, energy and passion to every project in front of him; and he never met a student he didn’t believe in or an idea he wouldn’t try.”

In addition to his academic and theatrical accomplishments, he also designed lighting and provided technical consultation and 3D design development for many corporate and marketing events.

Wilson earned his undergraduate degree from Augustana College and his M.F.A. from the University of Missouri at Kansas City. He also held a technical certificate from the Yale School of Drama.

In addition to his many professional accomplishments, Wilson was also a friend, mentor and inspiration to his students. Fine and Performing Arts chair Laura Franklin and former chair and associate dean Gary Barker shared memories of their friend and colleague.

”As a teacher, Mark was known for having the ability to reach just about any student. His generous spirit and his passion for theatre were infectious, and he would go out of his way to help get across a particular concept. One colleague recalls a class in which he was a guest lecturer, and was trying to describe a waltz. She says, ‘I’ll never forget – he stopped what he was saying, picked a student volunteer, and literally waltzed with her across the stage.’ For Mark, teaching on a typical day was never ‘typical’ – on Halloween, he demonstrated a dry ice/fog effect in Intro to Theatre, and had students in Appreciation of the Arts create a shadow puppet play from brown craft paper and a ‘script.’ Mark orchestrated, taught and led the drum parade for Atlas Week; and taught non-theatre majors the basics of sound design using musical instruments. Nobody who took his classes could help but be caught up in the ‘making’ of theatre.

Outside of formal classes, Mark mentored countless SLU students in lighting, sound and special effects design and execution for productions of the University Theatre at SLU. Mark also created some compelling and stunning visual and special effects for many productions at SLU, including those for the recent production of ‘Monster.’ Many of the students who worked alongside Mark for SLU theatre productions later became his professional theatre colleagues, and give Mark a large share of the credit for their successes.

Mark worked in professional theatre and as a lighting designer for over 35 years and had over 100 production credits to his name. He has worked at some of the most noted theatre and opera companies in America, including Saint Louis Repertory Theatre, Opera Theatre Saint Louis, the Saint Louis Black Repertory Theatre Company and Shakespeare Festival Saint Louis. He also collaborated on projects all over the U.S., in England, and as far afield as Abu Dabi, where he designed special effects and lighting for an exhibit at the Ferrari Theme Park.

More impactful than what he did, however, was the way he did it. No matter who you were or what your project was, if you asked, Mark would drop everything he was doing to help. He said ‘yes’ to everything; he brought imagination, creativity, energy and passion to every project in front of him; and he never met a student he didn’t believe in or an idea he wouldn’t try.”

He is survived by his wife Kim and two brothers, Matt Wilson of New York and Tommy Seabloom of Knoxville.

A memorial service for Mark Wilson will be held at 11 a.m., Saturday, June 10,  in Xavier Theater.