From his first plane ride as a toddler to his recent trek to the South Pole, Buzz Aldrin came to speak to a full house at Saint Louis University’s Center for Global Citizenship, detailing not only his new adventures but also urging those gathered to continue to gaze skyward and to push for exploration beyond Earth’s bounds. 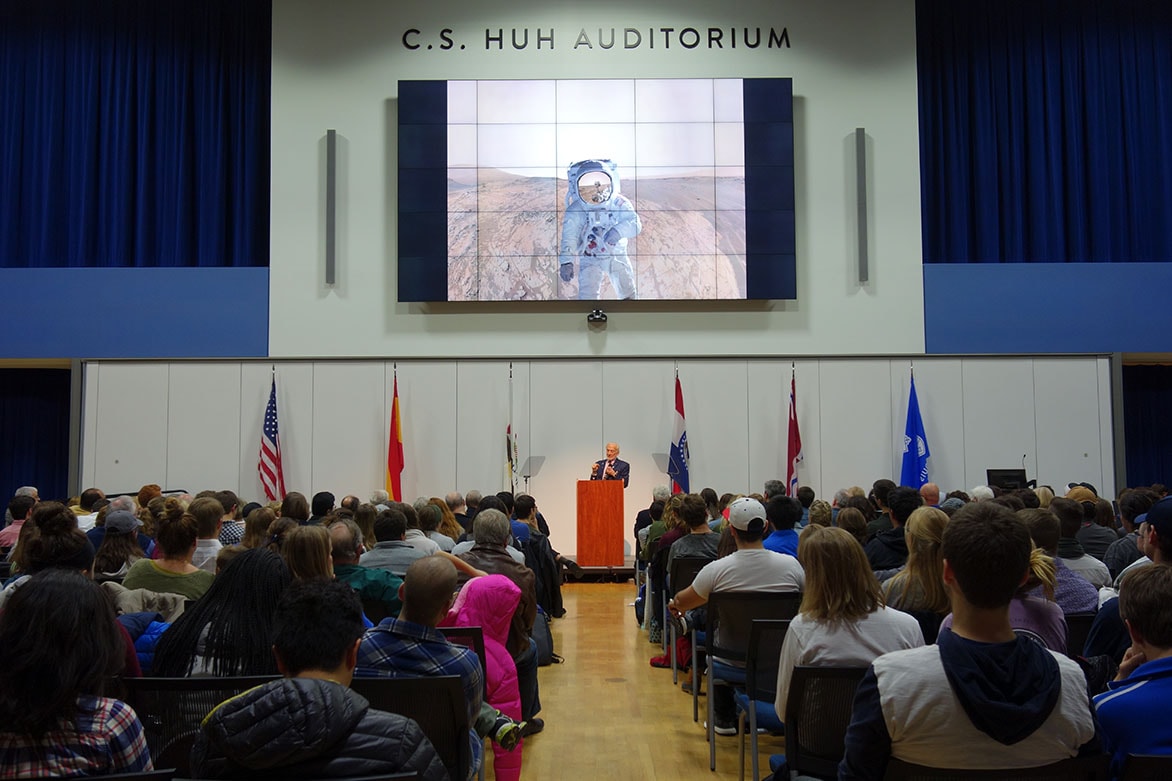 Buzz Aldrin detailed his past exploits as the second man on the Moon and his recent adventures in the Galapagos Islands and at the South Pole on Wednesday, Nov. 15, as part of Saint Louis University's Great Issues Speakers Series. Photo by Maggie Rotermund

“St. Louis has always played a major part in NASA activities,” Aldrin said, nodding to members of the “Old Mac Club,” who were seated in the talk’s first row. The club, including SLU alumni, is made up of former employees of McDonnell Douglas (now Boeing). The club members who attended the Nov. 15 SLU talk were able to see the man they helped put on the Moon.

Next to them and in the gallery above, new fans, from small kids in astronaut suits to SLU seniors, got a chance to see a living space legend. 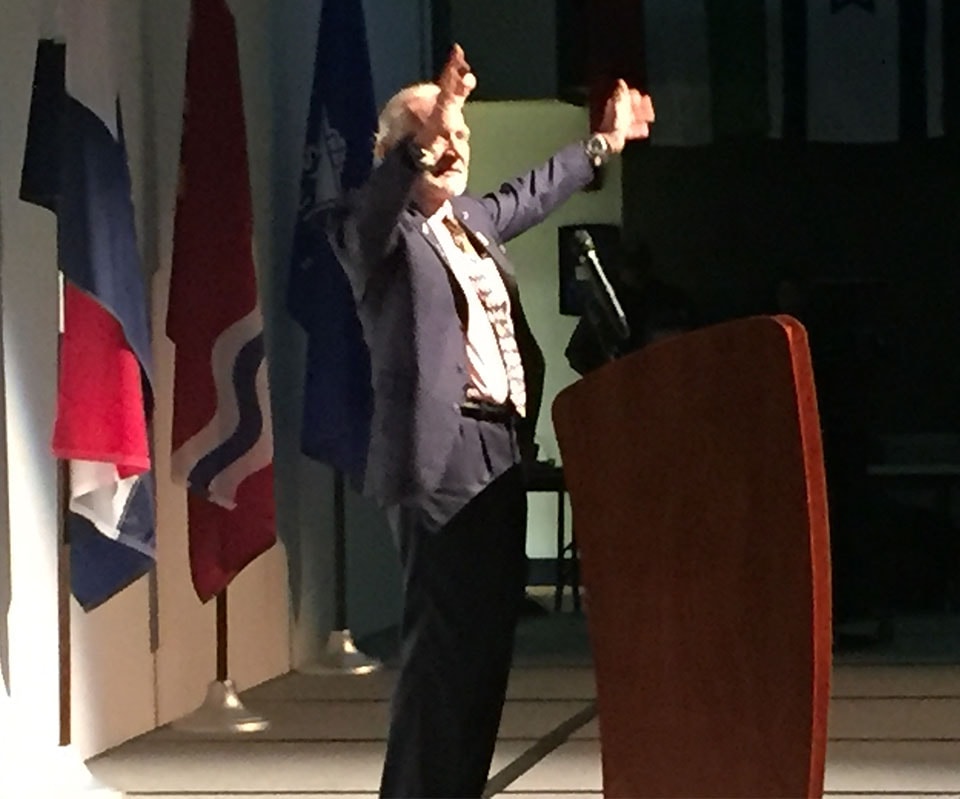 Aldrin, 87, spoke to a packed house at SLU's Center for Global Citizenship. Photo by Maggie Rotermund

Aldrin’s talk brought out long lines of SLU students, staff members, faculty and fans young and old from the St. Louis community who formed lines along SLU’s Midtown campus from Grand Boulevard and Laclede Street. The talk was part of SLU’s Great Issues Speakers Series, a University tradition since 1960 that has brought notable guests from LeVar Burton to figure skater Michelle Kwan to poverty expert Geoffrey Canada to the University .

For those lucky enough to get a seat for the packed talk, Aldrin spun his life’s story into a tale of determination, daring and a continuing curiosity and passion for extending humanity’s gaze to other worlds.

“Pioneering was my destiny,” Aldrin said, noting wryly that his mother’s maiden name was “Moon.” After a childhood spent flying in planes christened by the famed aviator Amelia Earhart and combat missions in the Korean War, Aldrin was keen to be part of America’s team in the space race as it heated up following the 1957 launch of the Soviet satellite Sputnik and cosmonaut Yuri Gagarin’s successful space flight.

“If space was going to be our next frontier, I wanted to be a part of it,” Aldrin said. His first application to join NASA was rejected, however. Rather than giving up, Aldrin returned to school and eventually earned his doctorate from MIT. NASA accepted his second application and he began training to become an astronaut.

While Aldrin can claim to be one of the few human beings to have been off-world, he said that the impact of the Apollo program was to advance human cooperation and to set a precedent for advancing the common good through advancing science, technology and space exploration. This was apparent to him, he told the crowd, when he and fellow astronauts Neil Armstrong and Michael Collins returned to Earth from their lunar expedition.

“We understood that they weren’t cheering for three guys but for what we represented by the world coming together, in that we had accomplished the impossible,” Aldrin said. “I feel so privileged to have played a part in that.”

He reminded the SLU crowd that the need for that kind of collegiality and willingness to work together today, as NASA and other space agencies turn their attention not just to the moon but to worlds like Mars.

“By venturing into space, we improved life for everyone here on Earth,” Aldrin said. “I plan to keep pushing boundaries as long as possible.”

And, while the story of Aldrin’s path to the moon is well-known, during the Wednesday night talk, he claimed credit for an unexpected first that sent those gathered in the C.S. Huh Auditorium into fits of laughter.

“Did you know,” he asked the crowd, displaying a photograph of himself taken during his spacewalk, “that this is the very first selfie?” 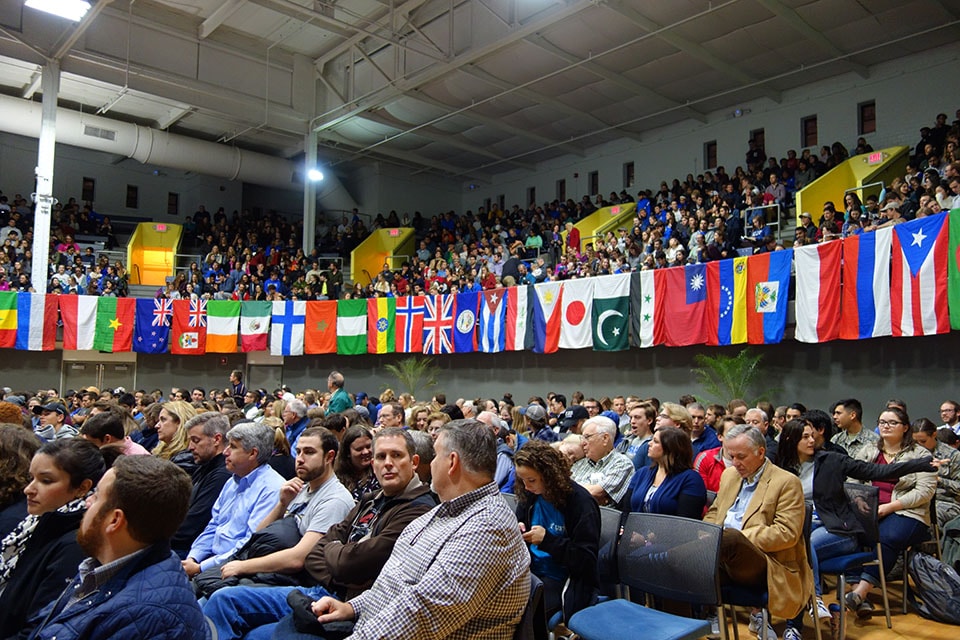 Many of those who came out to hear Aldrin speak waited in lines that stretched to Grand Boulevard and Laclede Street, hoping for a chance to see the space great. Photo by Maggie Rotermund