In a paper published in Nature Communications, a team led by Saint Louis University researcher Alessandro Vindigni, Ph.D. shares new information about how BRCA-deficient cancer cells operate, interact with chemotherapy drugs and what may be their last-ditch effort to survive. Researchers hope their findings may lead to improved chemotherapy drugs and shed light on why some cells develop chemotherapy resistance. 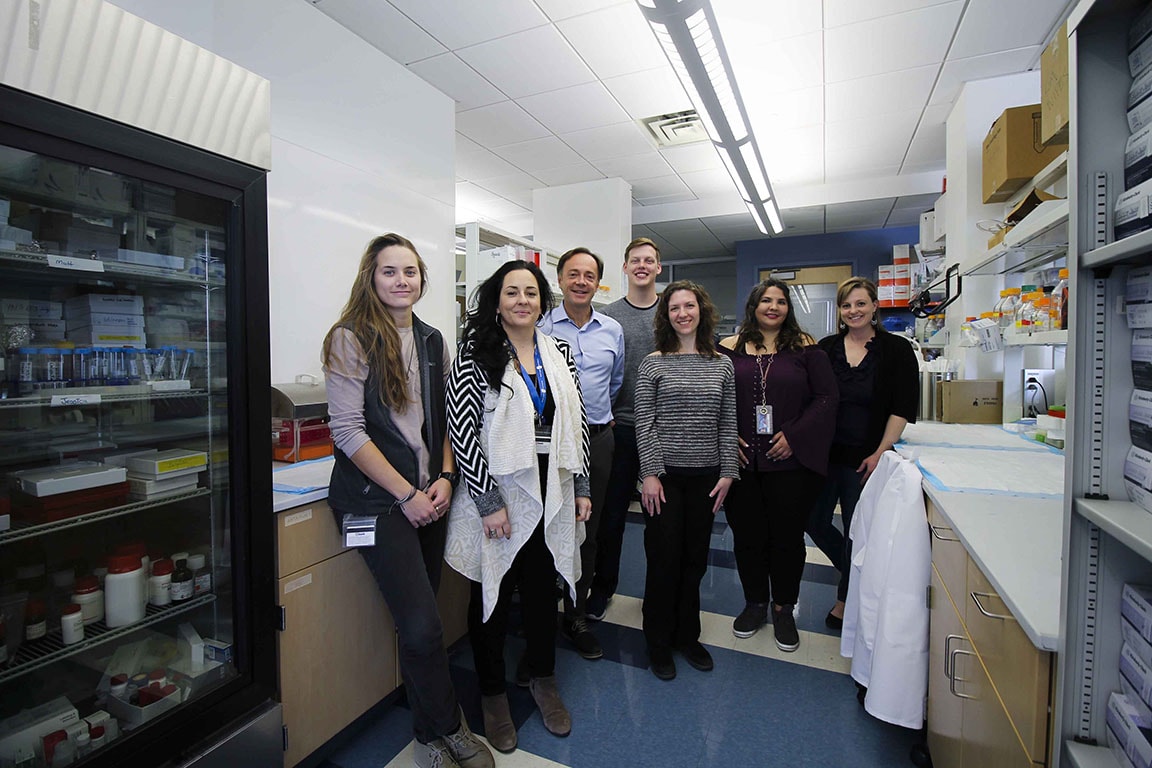 Vindigni, who is professor of biochemistry and molecular biology at SLU, studies genome integrity, the ability of a cell to faithfully transmit its DNA information on to new cells.

As cells create duplicate copies of their genetic material, a lesion or other obstacle can block DNA replication, potentially derailing a cell’s ability to reproduce. Lesions in DNA can occur as often as 100,000 times per cell per day. They can be the result of normal metabolic activities, like free radicals, as well as exposure to environmental factors such as UV radiation, X-rays and chemical compounds. If a cell’s replication machinery collides with the lesion, a strand break can occur.

When confronted with a lesion, cells have repair strategies, including a tactic called fork reversal. DNA replicates by unzipping its two interwoven strands and making copies of each. As the DNA strands separate and copy, they form a “replication fork.” If these forks run into obstacles like lesions that block their progress, cells perform a maneuver called fork reversal. 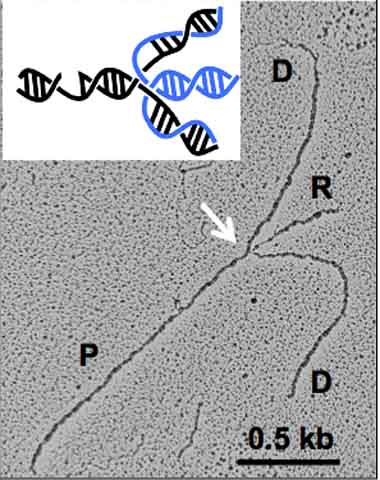 Once the damage on the DNA is recognized, DNA replication reverses its course by forming reversed forks. The newly synthesized DNA strands detach from their parental strands and attach to each other. At the same time, the parental strands reconnect, partially zipping up the fork. As a result, the fork transforms into a four-way junction structure, known as a reversed fork. Formation of reversed forks prevents forks from colliding with the replication obstacles, giving time for the damage to be repaired before replication resumes. In previous research, Vindigni and team identified new enzymes that enable cells to resume replication once the DNA lesion has been repaired.

To stop cancer cells, which proliferate by replicating faster than healthy cells, many chemotherapy drugs work by inducing DNA lesions with the hope of blocking replication.

In the current study, Vindigni examined BRCA-deficient cancer cells. Mutations in the BRCA gene are associated with several forms of cancer, including breast, ovarian and prostate cancers.

The healthy cells of people who have BRCA mutations lack one copy of the BRCA gene. If they develop tumors, however, those cells lack both BRCA copies. Scientists used this distinction to develop chemotherapy drugs that take advantage of this difference. The tumor cells are much more susceptible to DNA damaging drugs because they lack both copies, whereas healthy cells aren’t as likely to be affected by the same drugs because they retain one good copy of the gene.

Cancer cells lacking both copies of the BRCA genes would be massively degraded, and we would block their last recourse.

Our nuclei have enzymes called nucleases that can degrade DNA for several thousands of bases. When BRCA proteins are missing, the stalled DNA forks are unprotected and nucleases can easily start chewing up the DNA. This explains why BRCA-deficient tumors are susceptible to chemotherapeutic drugs that stall DNA replication; in the absence of BRCA, DNA is unprotected. The protein MRE11 was the first nuclease found to be effective at this.

“The idea is that if you take a cancer cell line that has a BRCA mutation and take a drug that blocks replication, the forks stall,” Vindigni said. “At that point, the fork is unprotected and so can be degraded by MRE11. This degradation digests the fork, leading to chromosome instability and accumulation of DNA breaks. In the absence of BRCA proteins, these breaks cannot be repaired and the cell won’t survive.

“This explains why patients with BRCA mutations can be treated with chemo drugs that induce DNA damage and replication fork arrest.”

Working from this information, Vindigni and the research team wanted to answer three questions.

One: Which other nucleases degrade unprotected DNA?
Because researchers knew that MRE11 only can degrade a few nucleotides, they suspected there must be others that contributed to this affect.

The team grew cells in a culture and used a florescence microscopy approach to monitor when a replication event occurred. Each fluorescent fiber that appeared on a slide corresponded to a single replication event, and the shorter fibers were evidence that a nucleotide was degrading DNA.

“You can see how these fibers become much shorter if nuclease is starting to degrade it,” Vindigni said. “That’s how we study which nucleases contribute to this, and it’s how we discovered another nuclease, EXO1, that plays this role.” 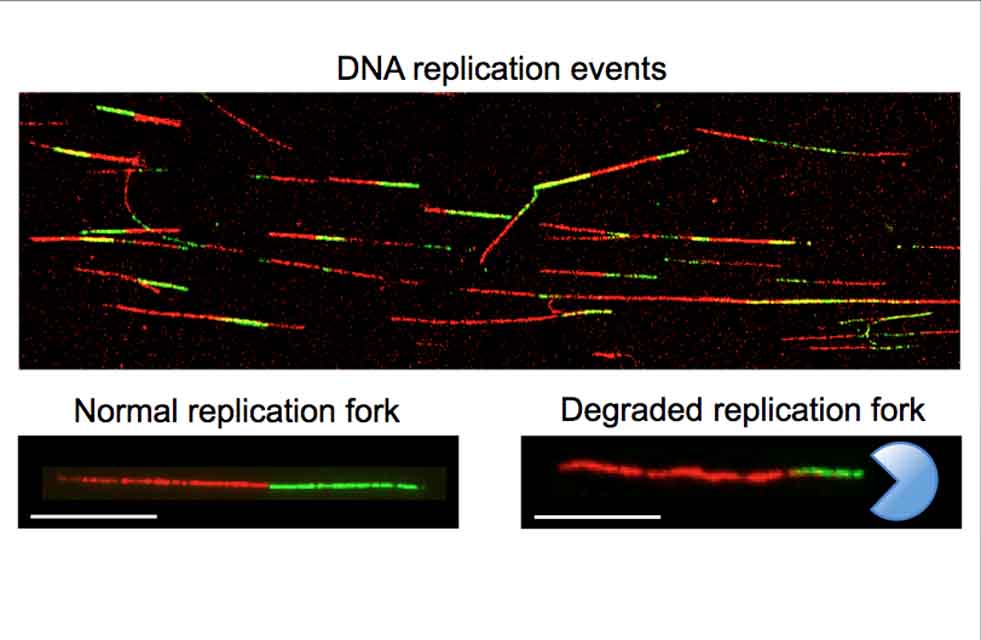 Two: How are these nucleases able to degrade the forks?
Next, the team wanted to know which is the structure that these nucleases degrade when they are loaded onto the forks. They found that the nuclease recognizes the stalled reversed forks, and that they target these reverse forks in BRCA-deficient cells.

“In previous work we found that fork reversal is really important,” Vindigni said. “When replication machinery stalls, it forms a reverse structure. Now, in this follow-up paper, we show that the reverse structure is the place where the nucleases attach.

“BRCA proteins have to protect the reverse fork because otherwise nucleases will attach here. BRCA proteins prevent degradation from the nuclease that acts as a little Pac-Man, chewing up the DNA.

Three: What ultimately happens to these forks?
Finally the team explored the fate of the cells where replication forks had stalled and been degraded by nucleases in the absence of BRCA proteins.

While degraded DNA leads to increased chromosome instability, the researchers found that it is not necessarily terminal. It is possible for cells to cut the strands and rescue the stalled forks to avoid cell death.

What could this mean for cancer treatments?
“Now, we might have a strategy to sensitize even more patients with BRCA-deficiency to chemotherapy drugs,” Vindigni said. “If you block this last rescue pathway, then you would really be in a scenario where cells lacking BRCA couldn’t survive.

"Normal cells expressing one copy of the BRCA gene would have a way to repair, and have a functional repair pathway if they do face an obstacle. Cancer cells lacking both copies of the BRCA genes, though, would be massively degraded, and we would block their last recourse.”

In addition to highlighting new strategies for optimizing cancer treatments, the research offers insight into another puzzle, chemotherapy resistance.

BRCA-deficient cancer cells that are degraded by nucleases, leading to chromosome instability, can develop resistance to chemotherapy. Scientists have seen an association between chemotherapy resistance and lack of degradation, an odd finding as it would be expected that DNA would be more likely to degrade in the absence of BRCA proteins.

This means there must be another avenue to protect forks from degradation, and knowing which factors are responsible gives researchers a clue to help understand chemotherapy resistance.

The work was funded by the National Institutes of Health (grant R01GM108648) and the Department of Defense (BRCP Breakthrough Award BC151728).