In a recent paper published in the journal Skeletal Muscle, a Saint Louis University researcher reports success in identifying new drug targets that potentially could slow or halt the progression of a form muscular dystrophy, an illness characterized by progressive muscle degeneration. 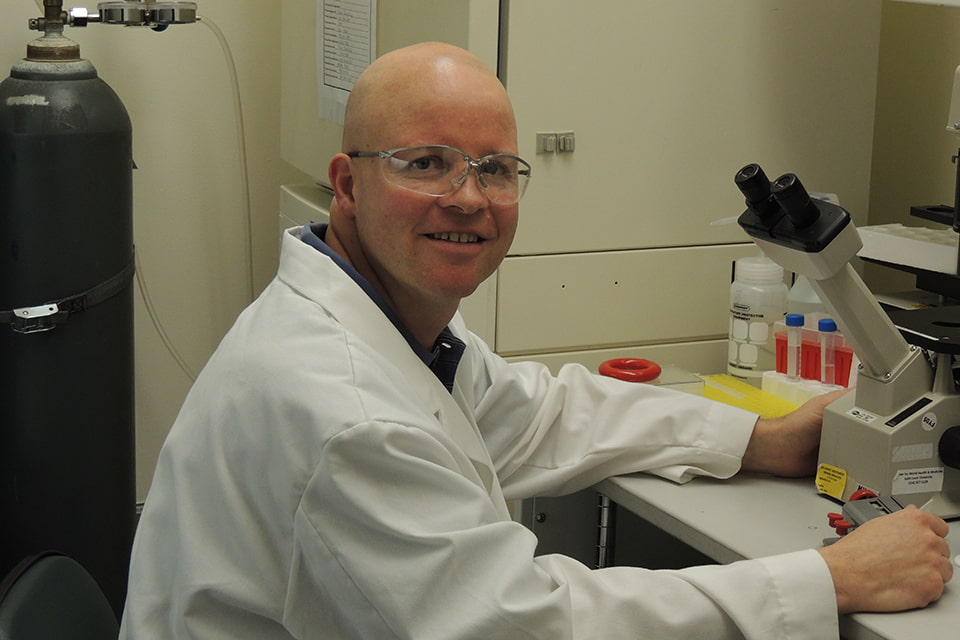 Francis M. Sverdrup, Ph.D., research fellow in the Saint Louis University Department of Biochemistry and Molecular Biology, studies facioscapulohumeral muscular dystrophy (FSHD), an inherited type of muscular dystrophy that affects over 800,000 people worldwide. It often afflicts young adults and typically begins with weakness in the face and shoulders, then spreads to all skeletal muscles. Currently, there is no cure for FSHD.

Over the course of the last decade, scientists learned that the DUX4 gene is responsible for FSHD. Inappropriate expression of the encoded DUX4 protein in muscle cells is the cause of FSHD muscle degeneration.

“DUX4 is not normally produced in adult muscle, and it is toxic when inappropriately expressed in FSHD,” Sverdrup said.

Sverdrup’s research leverages this discovery by screening existing drug libraries and testing the drugs on FSHD cells grown in the laboratory.

“Efforts to find drugs for FSHD have lagged behind other forms of muscular dystrophy, likely due to the genetic complexity of the disease,” Sverdrup said. “Now that we know that DUX4 causes the disease, there is a clear molecular target that we can go after. We took advantage of that by setting up these drug screens.”

The research team identified two classes of drugs that turn off DUX4. The first are a class of drugs that inhibit bromodomain and extra-terminal (BET) proteins and the second are drugs that turn on beta-2 adrenergic signaling (beta agonists). These classes of drugs already are being studied and utilized for other illnesses; BET inhibitors currently are being studied in clinical trials for cancer and other diseases while beta agonists are widely used for asthma and chronic obstructive pulmonary disease.

“It’s encouraging that our first two screens yielded molecules that turn off DUX4 and this also provides hope that additional candidates can be identified in larger screens,” Sverdrup said. “Though there are tough odds in drug development, this is a hopeful finding.”

Sverdrup is working with Ultragenyx Pharmaceuticals, a biopharmaceutical company focused on the development of novel products for rare and ultra-rare diseases, to optimize a potential treatment specifically for FSHD.