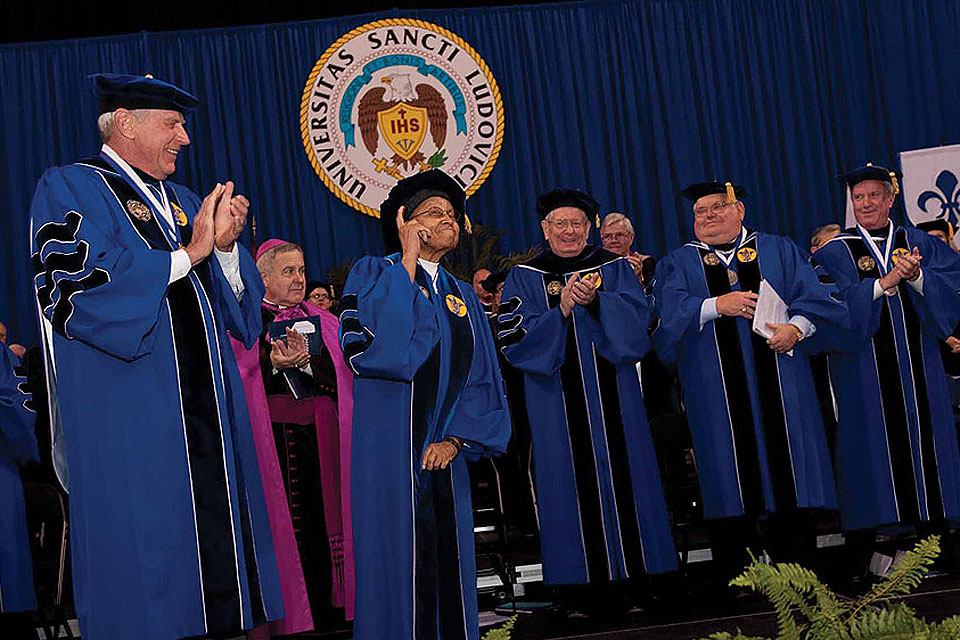 Sister Ebo was interviewed by Universitas writer Marie Dilg following the 2010 commencement where she was awarded an honorary doctorate. When she accepted SLU’s honor, she got a standing ovation. The applause went on so long, Ebo said she began to get uncomfortable with the attention. She then looked upward, pointed to the sky and brought to mind the words that guided her for decades -- “Give your glory to God. Give your prayers to me.”

Born Elizabeth Louise Ebo in 1924 in Bloomington, Illinois, Sister Ebo experienced loss and hardship at a young age. Her mother died when she was four years old. At six, when their father could no longer care for them, she and her two siblings went to live at the McLean County Home for Children. During her teens, she developed tuberculosis. But as she said, God’s providence intervened. She found her way into the home of a family friend and attended good schools, becoming the first African American graduate of her Catholic high school in Bloomington. It was one of many firsts for Ebo.

Following high school, after being denied admission to a Catholic nursing school because of her race, Ebo applied to the U.S. Cadet Nurse Corps and was the first African American accepted into their nursing program. During the late 1950s and early 1960s, she worked in medical records at St. Mary’s Infirmary, becoming director in 1962. Other accomplishments included being the first African American to head a Catholic hospital and earning advanced degrees from SLU.

But among the many things she was known for it was her efforts in the civil rights movement in the 1960s that will long be remembered.

It was March 7, 1965, and Ebo had cringed as she watched footage of Alabama state troopers and police beating voting-rights demonstrators in Selma. When Ebo’s superior asked her if she wanted to join an interfaith group traveling to Selma for a second march, Ebo said it was time for her to “put up or shut up,” so she went.

She was the only African-American woman religious in the group of 48 priests, rabbis, Protestant clergy and six Catholic nuns. When her group gathered at a church in Selma, Ebo was thrust to the front of the march and in front of a bank of microphones.

She spoke words that were heard worldwide: “I am here because I am a Negro, a nun, a Catholic and because I want to bear witness.” Those words marked the beginning of Ebo’s career as a civil rights advocate. She helped found and served as president of the National Black Sisters Conference and also was featured in the 2007 PBS documentary “Sisters of Selma.”

Jonathan Smith, Ph.D., Vice President for Diversity and Community Engagement, heralded the importance of her faith and role in history.

“Sister Antona Ebo belongs to a long line of African American women of faith, that stretches back at least to Sojourner Truth, who committed their lives to the work of freedom and justice,” Smith said. “She dedicated herself, her faith and her principles in the service of the movement to end racism. I’m proud to know that SLU and St. Louis were an important part of her journey."

In lieu of flowers, donations may be made to Cardinal Ritter High School, the archdiocesan Peace and Justice Commission, St. Matthew the Apostle Church, St. Nicholas Catholic Church or St. Alphonsus Liguori “the Rock” Catholic Church.