The St. Louis man who was mauled and nearly killed by chimpanzees in 2012 is putting his name and energy behind a new Saint Louis University initiative to support trauma patients.

Andrew Oberle is a peer patient advocate and development officer for the Oberle Institute at Saint Louis University, which treats patients who have suffered the same kind of severe trauma he endured. 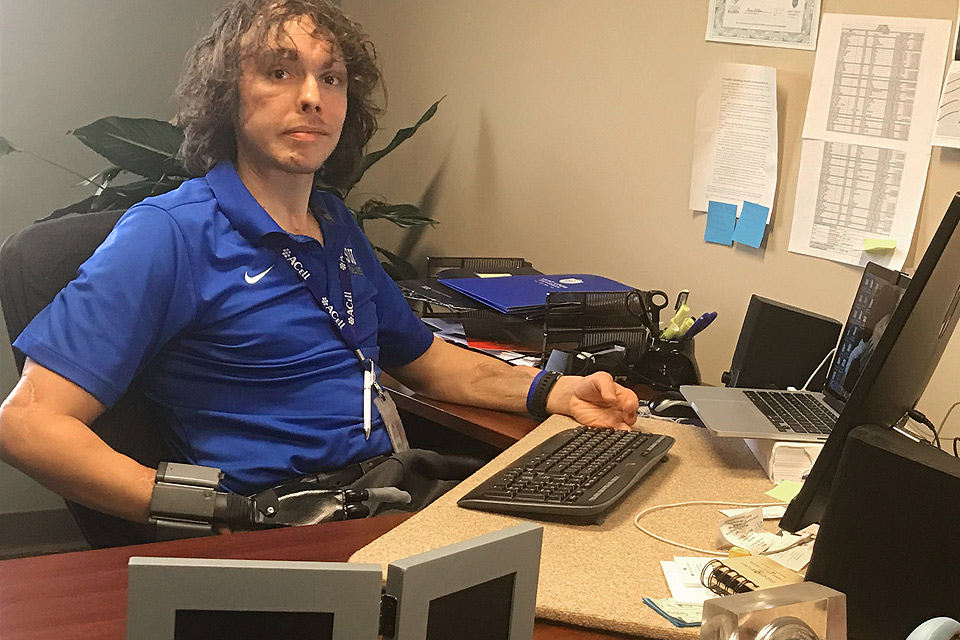 “After 26 surgeries and countless hours of holistic rehabilitation, I can truly say that I am thriving,” he said.

“I had an awesome team behind me as I recovered, not just my family and friends. My team gave me every opportunity to heal – internally and externally – and I want to give that to other patients. My goal with the Oberle Institute is to foster resilience, which is the most important thing to help a trauma patient recover.”

Oberle recently saw his first patient at the Oberle Institute, which was named by generous benefactors. Now in its pilot phase, the institute provides wrap-around, supportive care to help trauma patients recover. Its launch marks the culmination of two years of planning and a new chapter in Oberle’s life.

He joins Bruce Kraemer, M.D., a SLUCare plastic surgeon at SSM Health Saint Louis University Hospital, who has become one of Oberle’s best friends since treating him, on the Oberle Institute’s team.

Kraemer told the St. Louis Post-Dispatch that Oberle, whose injuries were worst he’d ever seen that were caused by an animal, brings special skills in leading the new trauma care program.

“(Oberle is) one of those people that has a positive life energy. You feel better just by being around him,” he told the Post-Dispatch. “His resilience and his fierceness of wanting to succeed so he can help others is very inspirational.” 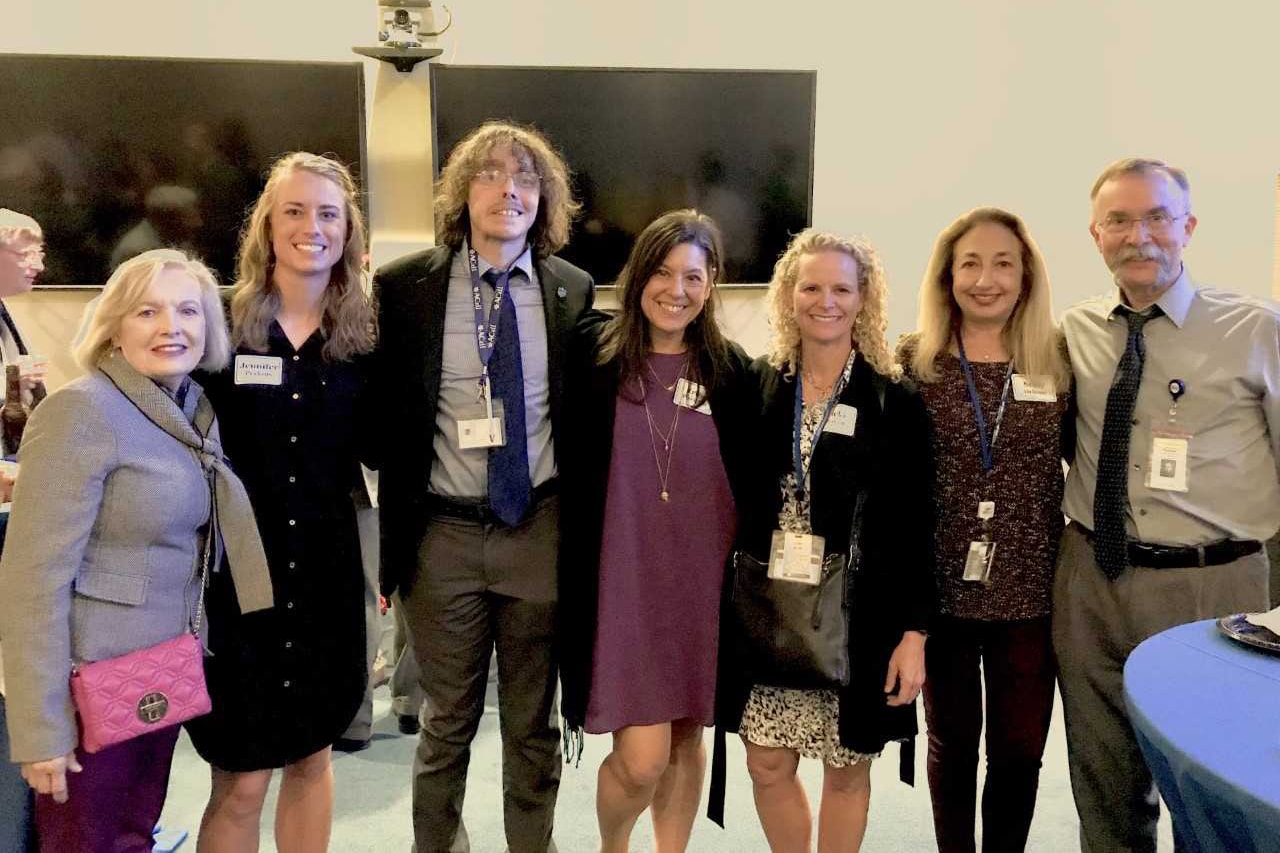 “It isn’t enough to just patch a patient up and send them on their way,” Oberle told a Story Collider audience on Oct. 5, sharing his story of personal resilience. “I learned firsthand that care has to be holistic and focus on mental health, emotional support and transformation.”

Oberle spoke with Eli Chen, the science reporter for St. Louis Public Radio and local co-host of Story Collider after the event, discussing how his experience shapes the vision for the Oberle Institute.

“If I wouldn't have had so much help in getting me in the right frame of mind during my recovery, I'm certain it wouldn't have gone as well as it had. But I had that mental and emotional support from the very beginning, which allowed me to focus on the positive things and really focus on, you know, working hard in therapy and taking on those surgeries with confidence and not being afraid,” he said during their interview.

Growing up, Oberle had no way of predicting he would wind up as founder of a Saint Louis University institute that cares for people who have suffered life-changing traumatic injuries. His focus was on animals – and from the time Oberle was in second grade, he knew he wanted to forge a career working with chimpanzees. His love of primates blossomed throughout childhood, and informed his collegiate studies at the University of Texas in San Antonio.

Oberle, 26 at the time, was at a chimp sanctuary in South Africa in June 2012, pursing what he called a “lifelong dream” of conducting research for his graduate degree in anthropology with the animals he loved so much.

His dream turned into a nightmare when he was violently attacked by two male chimpanzees. They decimated his body – collapsing his lung, biting off most of his fingers and both ears. Oberle lost chunks of his scalp, more than half of his right foot and some of his left foot. His wrists were ripped up, as was his elbow, back end and large portions of his legs. When doctors called his mother, they told her to get to South Africa as quickly as possible, but not to get her hopes up.

As his body went in and out of septic shock, Oberle was on a ventilator and placed into an induced coma when his mother arrived. He woke up two and a half week after the chimp attack, seeing his mom and his dad at his bedside, unaware of where he was. Then he realized the magnitude of his injuries.

“When I looked down, all I could see was a bloody body bandaged from the feet up,” Oberle told the Story Collider audience.

“I became absolutely afraid and anxious realizing how bad it really was. Then I started to feel all the pain, complete helplessness, and then that question we all have at some point came into my head: Why me?”

Inspired by cards and notes from strangers all over the world and friends and determined to return home to his beloved dog, Angie, Oberle willed his way to become healthy enough to travel to St. Louis. Once there, he was treated by a dream team of SLUCare physicians and SSM Health Saint Louis University Hospital therapists, counselors and nurses.

Surgeries were arduous and required doctors to be creative. An August 2015 St. Louis Magazine  article  details Oberle’s recovery. In it, Kraemer described the medical magic he used, including MatriStem, a new product derived from pig bladders that fast-tracks wound healing and helps the body create site-specific tissue.

“I was doing stuff that I wasn’t sure was even going to work,” Kraemer told St. Louis Magazine. “We offered him the newest, latest healing.”

It took 26 surgeries to put Oberle back together. “Some people refer to me as kind of like Humpty Dumpty,” Oberle told KTVI-TV Ch. 2’s Mandy Murphey for her Fox Files report.

He said his medical care went far beyond healing his wounds and reducing his pain.

“By achieving that level of healing, I was able to try state-of-the-art prosthetics for my hands and feet. I was able to put my scarred face back out into the world with confidence I thought I’d never have again,” Oberle told the Story Collider audience.

“A collection of carbon-fiber foot prosthetics, like you see at the Paralympics, and that confidence carried me to the gym where I got stronger and faster every day. Now I’m running 5Ks and able to do a few unassisted pull-ups.”

While life has taken Oberle on a different path, he’s discovered a new sense of purpose. 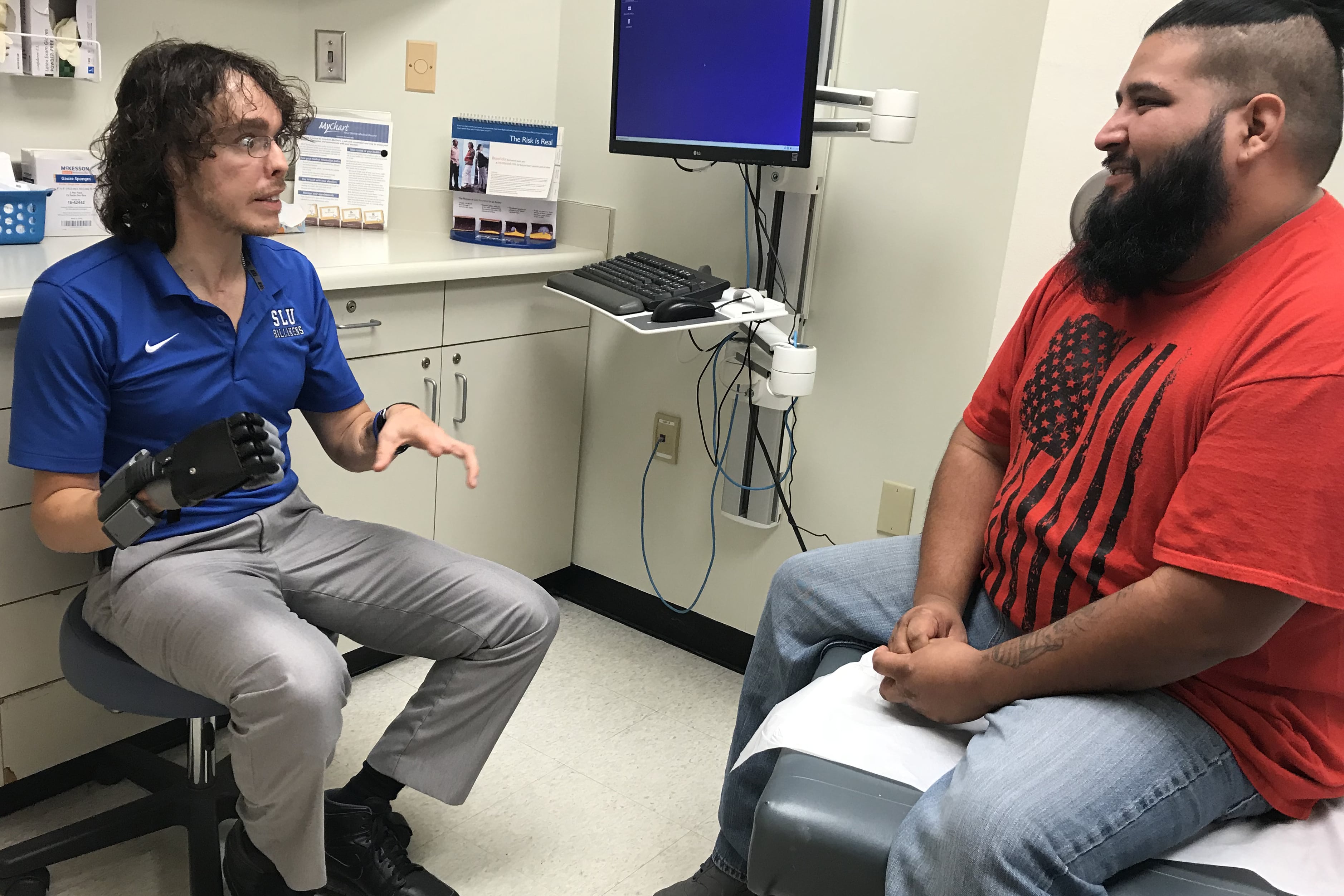 Oberle sometimes stops by Dr. Bruce Kraemer’s outpatient clinic to chat with patients who have been through the kind of traumatic injuries he endured. He talked with Benjamin Silva about the kind of socks he wears to protect his feet, which were severely injured.  Photo by Nancy Solomon

Having completed his graduate degree in anthropology, Oberle now is enrolled in SLU’s Executive Master of Health Administration program, which is teaching him invaluable skills to move the institute forward. He recently won the top award from the Missouri chapter of the American College of Healthcare Executives for his student essay on fostering resilience to improve the outcomes of trauma patients, which drew upon his personal experience. And he has his eye on ultimately getting his doctorate degree in health policy from the College for Public Health and Social Justice.

“I’m currently pursuing a degree that teaches you how to be a health care leader. Luckily SLU has one of the top programs in the country for health administration. It’s definitely do-able with my work schedule and some of my coursework ties into what I’m doing with the institute.”

And, although Oberle’s new career takes him far from the chimps he still loves, he is at peace.

“I never expected my life to go this way,” he told the Story Collider audience.

“I thought I’d work with chimps for the rest of my life. When I see them, I still feel that feeling of awe that I had since I was a little boy, but it’s different now. I’m not just amazed by how awesome they are. I’m amazed by the role they’ve played that’s led me to my new life purpose of building something that is going to help countless people thrive like I have.”

Starting the Oberle Institute gives Oberle the answer to the question he has grappled with since the accident.

“It would be almost irresponsible not to take what happened to me and use it to help others,” he told Post-Dispatch reporter Blythe Bernhard. “I survived for a reason.”