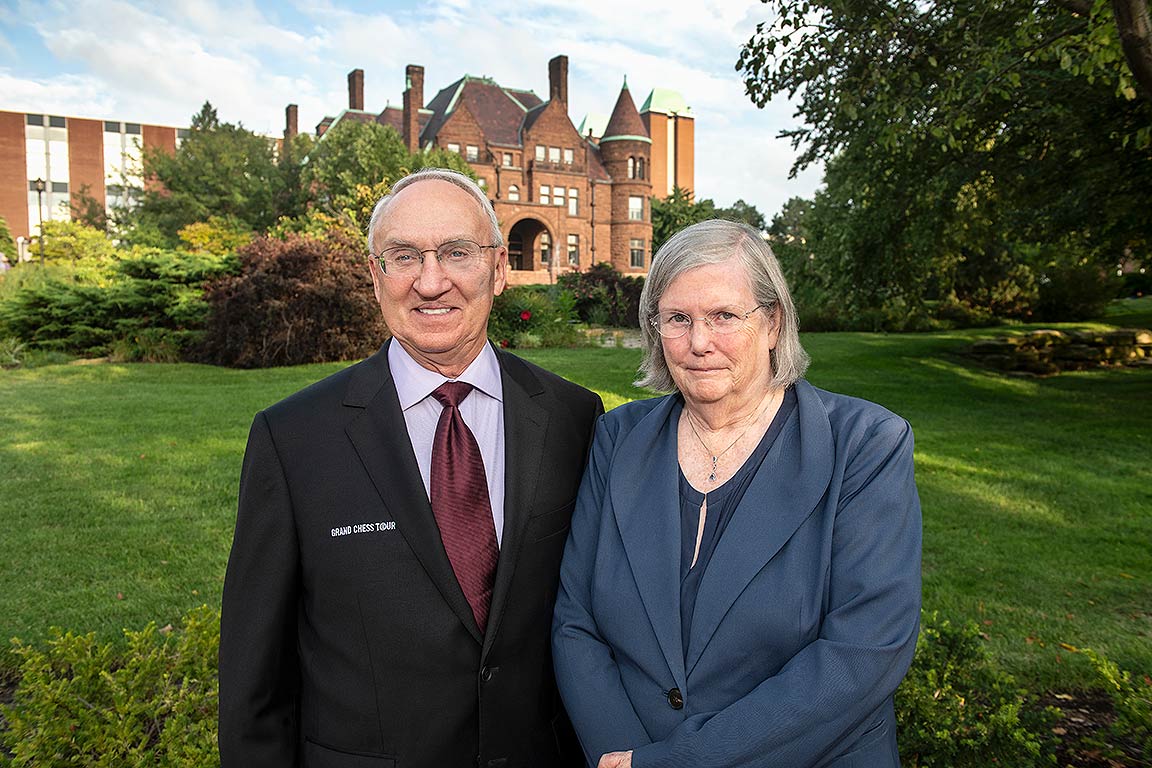 Dr. Jeanne and Rex Sinquefield pose for a photograph in front of the historic Samuel Cupples House on the campus of Saint Louis University. Photo by Steve Dolan

It is the largest gift in the University’s 200-year history and comes after SLU recently marked its most successful fundraising year ever, raising a record-setting $98.6 million in fiscal year 2017-18, which ended June 30.

“On behalf of the entire Saint Louis University community, I want to thank Dr. Jeanne and Rex Sinquefield for their transformational gift and for their unparalleled support of our University,” said SLU President Fred P. Pestello, Ph.D.

Video Message from Dr. Pestello to the SLU Community

“Through their immense generosity, the Sinquefields will provide the gift of knowledge to the world, bring further attention to the region as a research hub, and draw more outstanding scholars and students to St. Louis,” Pestello continued. “For all this and more, we are deeply grateful.”

The historic gift will fund a new Saint Louis University Research Institute that will serve as the focal point for SLU’s strategic goal of growing the scale and eminence of its research and scholarship. It will also establish a new Sinquefield Center for Applied Economic Research and provide annual support to SLU’s chess team.

The Saint Louis University Research Institute will help set SLU on a path to become a national and international model in promoting teaching, learning and research efforts that exemplify discovery, transformative outcomes and engaged citizenship in a global society – as called for in the University’s strategic plan. The new research institute will have several areas of focus, including:

The University will recruit and retain faculty research leaders who have a strong track record and potential for future funding and provide accompanying investments to support them. Among other efforts, SLU will create research institute fellowships for early, mid-career and highly accomplished senior faculty.

Faculty will be encouraged to propose multi-disciplinary research programs that build upon SLU’s existing strengths and have the potential to achieve significant impact. The institute will award $50,000-$100,000 planning grants to promising proposals. Projects that engage undergraduate students as collaborators will be encouraged.

The institute will fund the acquisition of additional resources, such as instrumentation, equipment and technology, that are critical to conducting and advancing leading-edge research. A portion of the growth fund will be designated to promoting research experiences for undergraduate students, including opportunities for ambitious capstone projects.

The Sinquefields’ gift will also launch the Sinquefield Center for Applied Economic Research and will fund a new director position – the Sinquefield Professor of Economics – to lead the center. To be housed within the Richard A. Chaifetz School of Business, this new center will conduct research grounded in applied economics or the study of economic theories in practice. The gift will also support the establishment of a guest lecture series in economics and related fields.

In addition to funding the new Saint Louis University Research Institute and the Sinquefield Center for Applied Economics, a portion of the Sinquefields’ gift will support SLU’s chess team, which has quickly become one of the winningest collegiate chess programs in the country. The gift will help fund student scholarships and player travel to tournaments, among other priorities to advance the University’s chess program.

About Dr. Jeanne and Rex Sinquefield

Rex Sinquefield was born in St. Louis. Following the early and unexpected death of his father, he and his younger brother were raised by the Sisters of Christian Charity at the Saint Vincent Home for Children in St. Louis. After graduating from Bishop DuBourg High School, Rex Sinquefield entered the seminary. After three years, he made the difficult decision not to pursue the priesthood and enrolled at Saint Louis University.

One of the inventors of a type of passive investing and a pioneer of the first index funds, Rex Sinquefield co-founded the investment firm Dimensional Fund Advisors, which today has more than $525 billion in global assets. Dr. Jeanne Sinquefield played a significant role in DFA’s achievements, overseeing the Trading Department and serving as executive vice president until the Sinquefields’ retirements in 2005.

Since then, the Sinquefields have dedicated their retirements to helping future generations, spending their time and resources on civic and philanthropic causes. Their Sinquefield Charitable Foundation supports programs related to music, art, education and children.

As a leader within the St. Louis region and across the state of Missouri, Rex Sinquefield actively participates in civic and cultural institutions beyond his and Jeanne’s generous financial contributions, including serving on the Saint Louis University Board of Trustees, among many others.

Through the years, Dr. Jeanne Sinquefield has had a long history of supporting organizations that enhance music, art and education. She believes strongly that exposure to the arts and quality learning opportunities have lifelong benefits for children.

About Saint Louis University: Founded in 1818, Saint Louis University is one of the nation’s oldest and most prestigious Catholic institutions. Rooted in Jesuit values and its pioneering history as the first university west of the Mississippi River, SLU offers nearly 13,000 students a rigorous, transformative education of the whole person. At the core of the University’s diverse community of scholars is SLU’s service-focused mission, which challenges and prepares students to make the world a better, more just place. For more information, visit slu.edu.