Who Let the Dogs In? SLU Did

It's common knowledge that pets bring joy and comfort to their owners and many of the people around them. In fact, numerous studies show that having dogs in the workplace increases productivity and creativity, decreases absenteeism and improves co-worker relationships and teamwork. 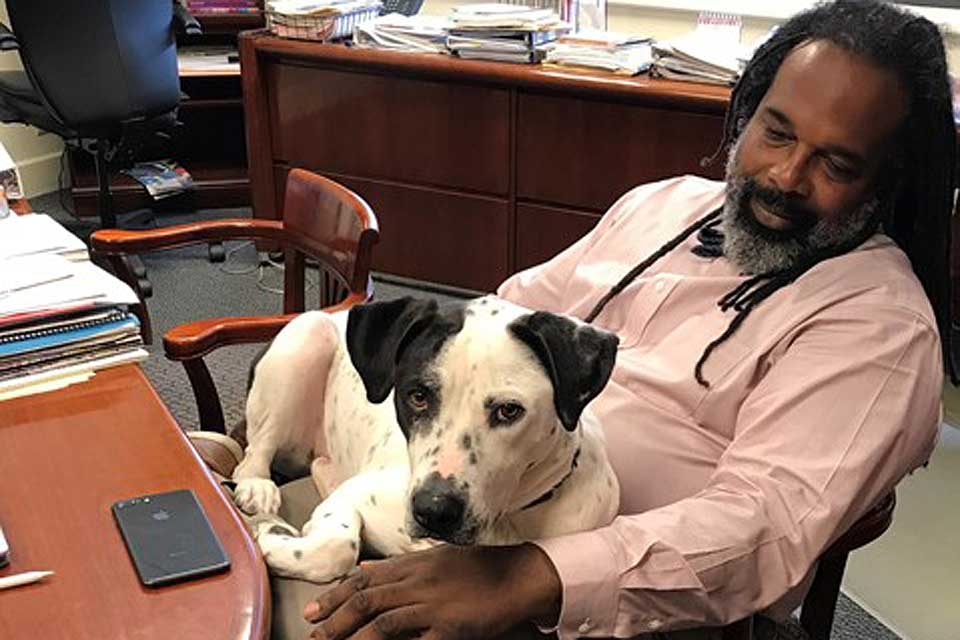 Since SLU adopted a policy in 2011 providing an opportunity for dogs to come to come to campus with their human parents, they have not only brightened the days of their owners, but also students, faculty and staff members.

Several chance encounters in the quad and in the halls of DuBourg have brought new insights into just how great it can be to have a new, four-footed friend who can make a good day great and a bad day better.

Whether it’s starting life as a puppy with his owner or being adopted from difficult beginnings, each dog has his own special story and his own special family of friends within the SLU community.

In DuBourg Hall on the north campus, it’s not uncommon to meet people and pets in the hallway as they head outside for a walk. While it’s always important to approach them in a careful manner, dogs at SLU tend to be incredibly friendly and happy to socialize. In some cases, they even want to curl up in your lap or spend quality time playing.

Tracy Watkins, executive assistant in the Provost’s office, is a regular visitor to the Office of Diversity and Community Engagement on the second floor where she is enthusiastically greeted by Rowdy, a Dalmatian mix who calls VP Jonathan Smith “Dad.”

“He is such a sweet dog. As soon as I come through the door, he wants me to go to a chair so he can sit in my lap,” Wilkins said. “I believe Rowdy has come to think of me as one of his toys.”

According to Smith, Rowdy was born somewhere on the east coast in the New York/New Jersey area where he was ultimately rescued by the group Unleashed NY, an organization concerned with empowering women and justice for animals.

“My youngest daughter fostered Rowdy when he was very young and fell in love with him,” Smith said.

“Shortly after she fostered him, he was adopted in the winter of 2016. That, sadly, fell apart very quickly and the family returned Rowdy to Unleashed. When Mariah found this out, she set an adoption process in motion. However, she has allergies and asked me and her mother to keep Rowdy.”

“We agreed and on January 15, 2017, Rowdy flew from LaGuardia to Lambert to join our pack. He’s the youngest of three dogs — all of whom are rescues. The other two, Swarley (11) and Lucky (10), have adjusted well to their new energetic younger brother. Late last spring, I decided to start bringing a dog in to work at least weekly to walk campus and meet people. This summer, Rowdy has become that dog on an almost daily basis. He absolutely loves coming to work and passing out hugs and kisses to anyone who needs them.”

Smith is not the only person in his office with a soft spot for cheerful canines. His executive assistant, Regina Walton, likes to bring Chester, her 14-year-old long haired dachshund, in for the occasional visit where he welcomes visitors and enjoys naps by a sunny window.

“He loves being on SLU’s campus because he gets multiple hugs and kisses from many students,” Walton said. “Chester loves the spotlight, but he has such a kindred spirit.”

Walton purchased Chester for her son during his elementary school years when he complained of being alone. Chester also holds some celebrity status, having been featured twice as one of “Sammy’s Stars” on the morning show on KSDK-TV Ch. 5.

“In case you didn’t know, he is spoiled rotten.” Walton added.

Step into the hallway outside Diversity and Community Outreach and you have a good chance of being greeted by a bounding bundle of puppy energy in the form of Finn, a seven-month-old golden doodle who has spent his formative months here at SLU with Connor Richardson, Director of Presidential Communications in the Office of University President Fred P. Pestello, Ph.D.

Richardson has loved and had dogs ever since he can remember.

“We rescued a dog in grade school that I had until halfway through undergrad,” Richardson said. “Once I graduated, I knew I wanted to get another one.”

Richardson decided on a golden doodle because they have wonderful personalities and lots of energy, adding they are very smart and frequently used as companion and therapy dogs which he hopes to train Finn to do.

But what’s it like to bring a growing puppy with all that energy to work and what does he do all day?

“Finn is one of the most well-behaved dogs I have ever known, and I recognize I’m biased in saying that,” Richardson said. “Don’t get me wrong, he loves to zoom around the office and see everyone. But he sleeps most of the day to ensure he is ready to play when the time comes. Other times he will just sit at the door and wait for his friend Rowdy.”

Part of the day also includes helping Finn learn his manners and social graces and there are some tricks to making that happen.

“Dogs love to please their pack, but we also work very hard on training,” Richardson said. “It is as tiring for me as it is for him. He has certainly made me more patient and it is so rewarding when he finally gets a trick right. He will do just about anything for a piece of a banana.”

There’s no question that to meet Finn is to adore him and it’s an affection that goes both ways.

“I take him for a walk during my lunch to see everyone around campus. He loves people and they love him, which makes me happy. We are still working on not jumping. He just gets so excited he forgets his manners. As an introvert, he also makes it easier to meet new people, which I appreciate … most days.”

And it’s not just people friendships that have been formed. Finn is great buddies with Jonathan Smith’s dog, Rowdy, just down the hall.

“Finn met Rowdy one day in Jonathan’s office, and they were immediately friends,” said Richardson. “I’m amazed at how quickly dogs can sense whether or not they like another dog or person. They played until they were exhausted, and to this day I have yet to hear a single growl or bark from either of them. They even share a water bowl.”

So the next time you’re having a challenging day or just need the happiness that goes with time spent with a joyful pooch, take a stroll outside or schedule a meet and greet.  You’ve met Chester, Finn and Rowdy but when you paws to look around you’ll be surprised how many furry friends are on the SLU campus.

You can also meet other SLU pets and their humans by going to Instagram.com/dogsofslu.