ST. LOUIS (Feb. 1, 2018) — Looking to help break the cycle of incarceration, Saint Louis University and the Urban League of Metropolitan St. Louis are teaming up to sponsor a special event designed to give individuals with a criminal past a second chance at a better future. 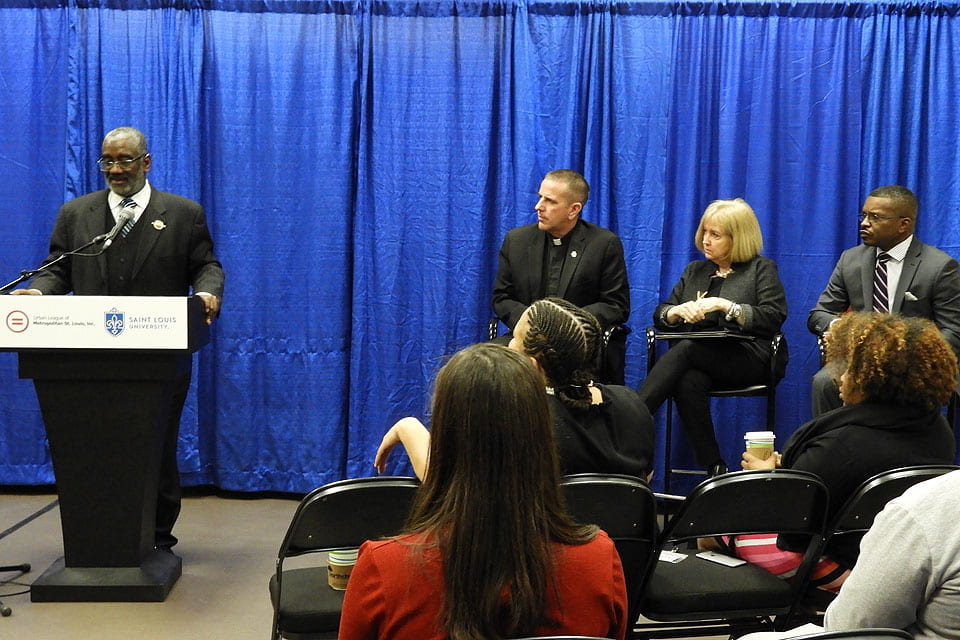 The “Partnership for Success Career Fair” for ex-offenders will be held from 9 a.m.-1 p.m., Tuesday, April 10, in Chaifetz Arena at 1 N. Compton Ave., on the SLU campus. It’s the first career fair of its kind in a decade and comes at a time when local leaders are working to address crime in the region.

“We are excited to partner with Saint Louis University to offer second chance job opportunities to ex-offenders,” said Michael P. McMillan, president and CEO of the Urban League of Metropolitan St. Louis, Inc. “Through the Urban League Save Our Sons program, we have worked diligently to provide comprehensive services to this population as well. We hope to make significant progress through this career fair.”

In addition to SLU and the Urban League, the St. Louis Agency on Training and Employment (SLATE) and Ferguson 1000, as well as the U.S. Probation Office, the U.S. Department of Justice and the Missouri Department of Corrections are partnering on the fair. Job News USA is providing logistical support.

As the fair’s host, Saint Louis University currently provides educational opportunities for incarcerated people and prison staff at a state facility in Bonne Terre, Mo., and a federal correctional institution in Greenville, Ill. More than 4,500 people have been educated through the SLU Prison Program since its launch in 2008.

“As a Catholic and Jesuit university, we are passionate at SLU about putting our expertise to work with community partners to serve our fellow citizens, especially those who are most in need,” said Father Christopher Collins, S.J., Assistant to the President for Mission and Identity at Saint Louis University.

“It is a privilege for us not only to host this career fair but also to continue through several of our initiatives to prepare people who have been incarcerated to gain the healing, resiliency and skills they need to flourish to live the lives for which we believe God has created them,” Collins said.

The career fair was announced during a news conference Feb. 1 at the arena that featured several local officials and civic leaders.

"This is such an important effort for our community, our entire community," said St. Louis Mayor Lyda Krewson.

"SLU is proud to join this effort alongside many community organizations invested in addressing some of the most pressing needs of St. Louis and our region," Pestello said.

Anthony Franks, assistant United States attorney and reentry coordinator, reminded those gathered that tackling the problem of recidivism was a community effort.

"No one has a monopoly on helping people," Franks said, praising the collaborative effort spearheaded by SLU and the Urban League. 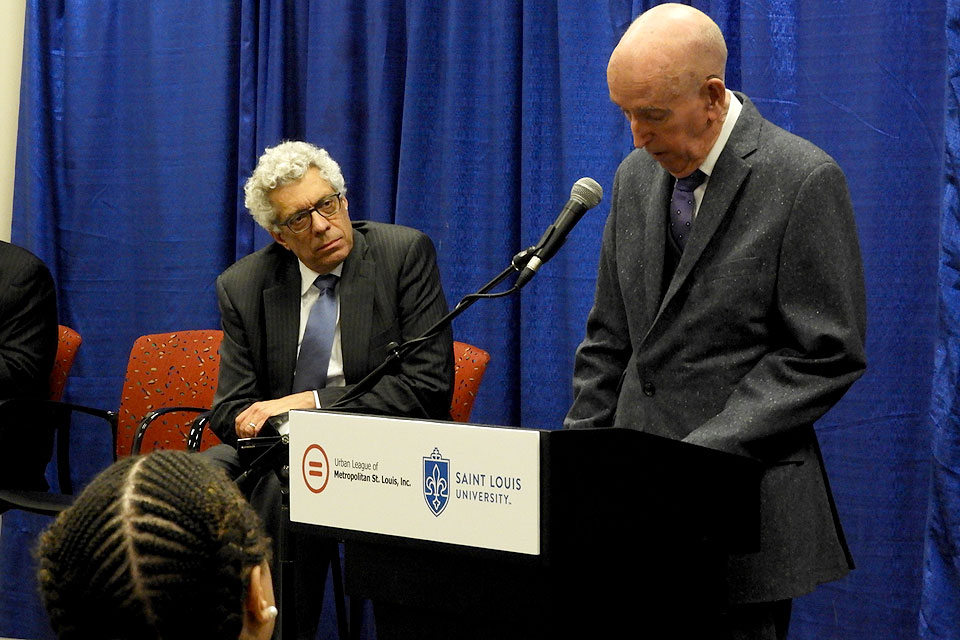 Data show that employment can make a difference in reducing crime rates. The vast majority of ex-offenders whose parole was revoked were unemployed at the time of their violation, and an unemployed ex-offender is significantly more likely to return to prison than an ex-offender who has a job.

The career fair is expected to draw dozens of potential employers from a variety of industries. To encourage participation, organizers are promoting the benefits of hiring ex-offenders, including tax credits and free insurance through a federal bonding program.

Employers interested in reserving a booth should call Rick Kruckemeyer from Job News USA at 636-489-5400. Space is limited.

Note: Proof of completion of job readiness training and resumes are required for all job seekers.

The Urban League of Metropolitan St. Louis is a social service and civil rights organization that works to fulfill its mission of Empowering Communities and Changing Lives. Programs are offered in the areas of Economic Opportunity, Community Empowerment, Education Excellence, Civil Rights and Advocacy. For more information about the Urban League, visit www.ulstl.com.