Dr. Dubuque directed the department of surgery at what is now SSM Health St. Mary’s Hospital from 1962-1981, and was a surgeon at Saint Louis University Hospital. 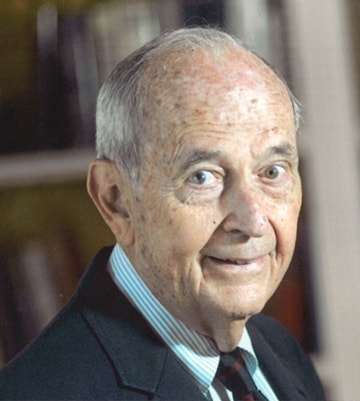 Dr. Dubuque graduated in 1952 from the medical school at Saint Louis University, where he also completed his residency in surgery. He then served in the U.S. Army as Chief of Surgery at Ft. Benjamin Harrison Hospital in Indiana.

He was a Fellow of the American College of Surgeons, Fellow of the Southwest Surgical Congress, president of the St. Louis Surgical Society and member of the Alpha Omega Alpha Medical Honor Society.

"He was a terrific surgeon from a technical standpoint, but he also had such a gentle manner," said Raymond Slavin, M.D., professor emeritus of allergy and immunology. "He was a very good teacher and really kind to everyone he encountered."

After his career at Saint Louis University, Dr. Dubuque funded establishment of the operating room and volunteered as a surgeon at Hôpital Sacré Coeur in Milot, Haiti, from 1986-87. He was appreciative of the generosity of donors who he engaged in the medical mission project known as Crudem (Center for Rural Development of Milot).

“I have been able to raise enough money from St. Louis people to equip the O.R. in first-rate fashion, probably the best in Haiti, and I have been very busy since arriving,” he wrote in a 1987 letter that stressed the extreme medical need in Haiti.

“If you think you have problems, I have just read a report (Nov. ’86) from a medical task force from the U.S. evaluating health care in Haiti. Their description of the University Hospital in Port-au-Prince would raise your hair. For a 700-bed hospital, the annual budget is $500,000 total. Several patients on the medical service said they hadn’t seen a doctor in a week and on the post-partum division they found two patients per bed.”