Emily Cybulla and Alysia Johnson, both second-year medical students, were chosen to represent SLU at the national Alpha Omega Alpha Honor Medical Society student research forum. To qualify, the pair participated in a poster presentation during which the medical students shared their research findings. 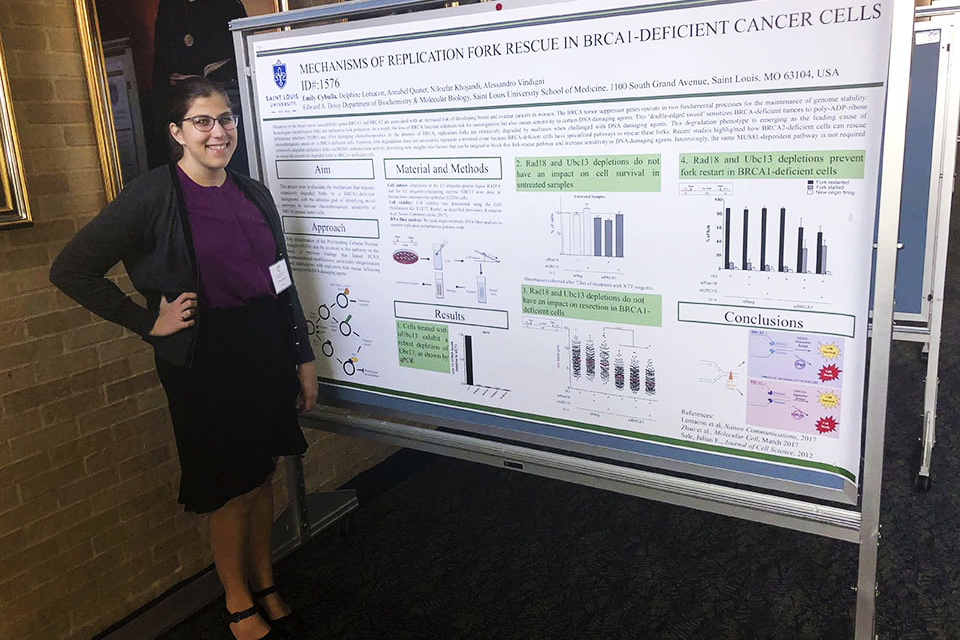 Finalists delivered an oral presentation at SLU in February before fellow students and faculty. SLU sends the first and second place winners to present their research at the annual forum in Galveston, Texas.

Cybulla’s winning project this year took place under the mentorship of Alessandro Vindigni, Ph.D., professor of biochemistry and molecular biology. The research focused on understanding the mechanisms of DNA replication fork rescue in BRCA1-deficient cancer cells. BRCA1/2 are the breast cancer susceptibility genes responsible for an increased risk of breast and ovarian cancer in women, and these proteins are involved in two critical processes in cells: repair of DNA damage via homologous recombination and protection of stalled DNA replication forks.

“Previous studies have shown that in BRCA-deficient cancer cells, fork stalling and subsequent degradation are not terminal events,” Cybulla said. “Therefore, establishing pathways of fork rescue in these tumor cells could provide insight into ways that this mechanism can be targeted to increase chemo-sensitivity of BRCA-deficient cancer cells to DNA-damaging agents.”

“SLU has been a wonderful place for me to engage in research, learn as a medical student, and build community,” Cybulla said. “There are some amazing mentors here, and I am grateful to have found an academic institution and medical center dedicated to cura personalis, care for the whole person.”

Cybulla completed her undergraduate degree in biochemistry at Loyola University Chicago before entering the Jesuit Volunteer Corps (JVC) in Syracuse, New York, where she worked as a residential assistant in a community of people with and without disabilities who share life and create home together.

“My experience at a Jesuit undergraduate institution and at this community, which is called L'Arche, played major roles in my decision to come to SLU, another Jesuit institution,” Cybulla said. “Additionally, I felt that the M.D./Ph.D. program at SLU was a good fit for me, and the research environment seemed very collaborative when I interviewed here, which has absolutely been the case since I joined the program.”

Johnson’s research focused on formerly incarcerated women. Research shows these women experience high rates of unplanned pregnancy, drug relapse and reincarceration and that addressing substance use during pregnancy is often too late to optimize the health outcomes of both mother and child. Under the mentorship of Jennifer Bello-Kottenstette, M.D., assistant professor in family and community medicine, the project looked at whether future orientation toward healthy pregnancy can impact substance use after release. 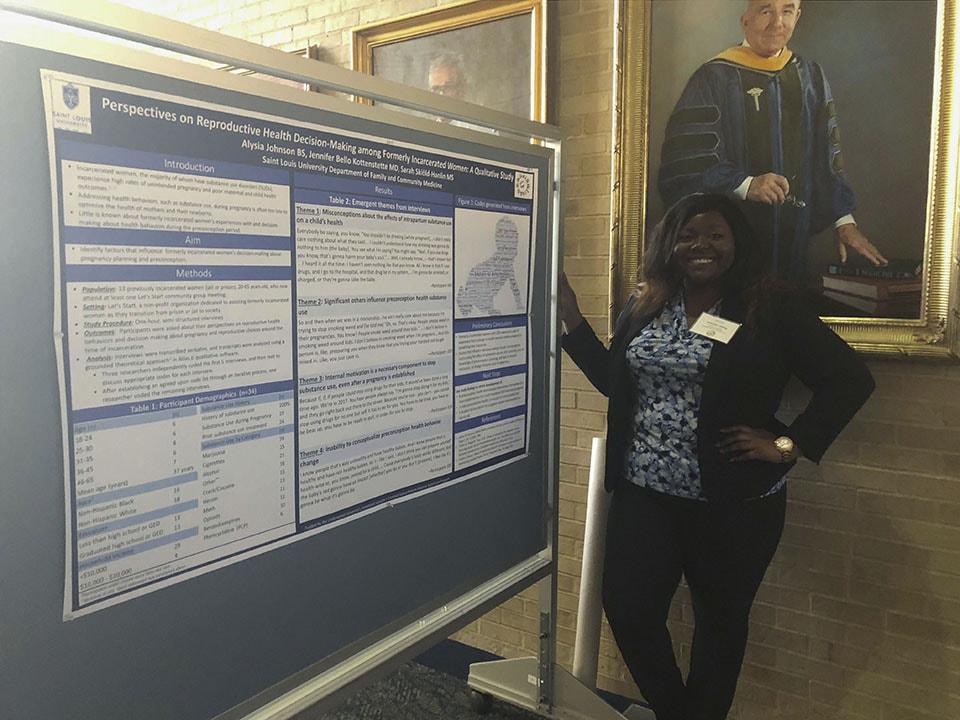 In interviews, researchers asked previously incarcerated women about their perspectives on reproductive health behaviors and decision making about pregnancy and reproductive choices around the time of incarceration.

“We concluded that formerly incarcerated women with substance abuse disorders expressed a lack of awareness that a change in health behavior before pregnancy is something they should do,” she said. “Factors that influence their decision making include misconceptions surrounding the effect of substance use on child outcomes, lack of knowledge of preconception planning and lack of internal motivation to change behavior prior to pregnancy.”

Johnson said she has always been interested in why people make the choices that they make, and how their environment and upbringing plays a role in those decisions.

“This research topic allowed me a chance to foster the medical anthropologist in my heart while studying to become a physician,” she said.

She added that the patient population has a special place in her heart.

“I think this is a patient population of lost voices, many of whom in their life were failed by people and systems meant to protect them,” she said. “I interviewed women who were raped and continuously molested by family members at 4 years old, women who had children as young teens by people close them, women who grew up desensitized to drug use and abuse due to their environment, women who had lives that no one deserves. We are all, every single one of us, a sum of every small moment in our life.”

Johnson said she believes this is the promise medical students make when they become physicians – to treat a sick human being and not a disease.

“That is what I am aiming to do with Dr. Bello-Kottenstette, my mentor. As a part of her project, I am aiming to prevent children from suffering from Fetal Alcohol Syndrome, Neonatal Abstinence Syndrome, low birth weight and more. I hope to help pave a way for women with mental health issues and physiological addiction to have the tools necessary to optimize their health and their child’s.

“Being a future physician is a gift. It is an opportunity to heal, but is also an opportunity to prevent disease states by educating individuals and helping them make better choices in their lives. We cannot do that if we pass judgments, are biased, make assumptions about what people should and should not know, or if we never ask why?”

Johnson said after presenting her work in Galveston, she returned to SLU with a deeper appreciation of the mentorship she receives here.

“After presenting one of my judges was giving me accolades for my presentation, and highlighting various ways in which I did well. The entire time she praised me all I could think was, ‘Thank you Dr. Bello,’” she said. “Dr. Bello made time in her busy schedule to have me practice my poster and oral presentations multiple times. She taught me about grounded theory, how to present concisely and effectively, and how to field questions on my research. She gave me tools I could not have gotten on my own. She molded me, and in Galveston I realized how rare of a mentor she was. She did not just provide me an opportunity to do research, she sculpted me into a better presenter, a better medical student, a social thinker, and in many ways, a better person.”

Johnson said Bello-Kottenstette is just one example of the SLU culture.

“I attend a medical school that cares about their students. Deans don’t just know our names – they get to know us,” she said.

She said Michael Railey, M.D., associate dean for diversity and student affairs, has defined her experience here and was the reason she decided to come to SLU.

Railey isn't the only administration official to make an impact on her. Johnson remembers stopping into SOM administration offices during a deans meeting and saying she wasn't feeling well. Chad Miller, M.D., associate dean for undergraduate medical education, stopped the meeting in order to get her medical attention.

“That’s the kind of school I go to – I have cried in their offices, I have been encouraged in their offices, and I have grown as a person through my experiences with our dean staff,” she said, noting that she would choose SLU again. “This is not just my school; this is my home 13 hours away from all of my family and friends.”

Johnson, a Dallas native, completed her undergraduate degree at Baylor University. While there she conducted research on Dengue Fever as part of the Isla Mujeres Ethnographic Field School Advanced Methods training session.

Students are elected into AOA, a national Honor Medical Society, based on scholastic achievement, personal integrity, ability to work well with their peers and promise for significant contributions to the medical profession.

“The faculty at SLU SOM are proud of our students,” said Paul Hauptman, M.D., assistant dean of clinical and translational research. “This is the second year in a row that two of our students secured first prize in their respective research category at the national competition. Our students' dedication to research and the quality of their work are testaments to them, their research mentors and an environment at the School of Medicine that fosters excellence in medical student research.”

The research forum is an annual event sponsored by Saint Louis University School of Medicine.