John Cook, a Saint Louis University alumnus, trustee emeritus and benefactor whose generosity paved the way for the 1999 expansion of SLU's business school, died May 22. He was 75. 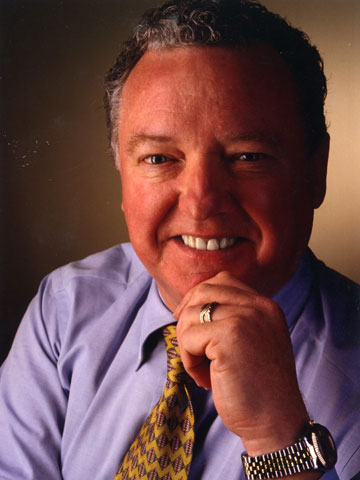 Cook, who graduated from SLU in 1964 with a degree in accounting, was already making his way in the business world while he was a student working 30 hours a week to help pay for tuition and books. It was one of those jobs that set him on a lifelong path of excellence.

In a 2000 edition of SLU’s alumni magazine, Universitas, Cook related the story of working in the accounting department at local department store Stix, Baer & Fuller. Tasked with balancing the books for the company’s parking garage, he uncovered a significant daily revenue shortfall that led to the discovery of a longtime employee who had been skimming money from the register for years.

His diligence led to a permanent job after graduation where he was an assistant controller by the age of 24. Cook’s career path led to leadership in several major corporations and ultimately to the founding of his own company, The Profit Recovery Group International.

Throughout his years of business and financial success, Cook always believed in the responsibility to give back and that led to the creation of the John and Lucy Cook Supporting Foundation, Inc. and the Cook Family Foundation.

That spirit of giving back also extended to his alma mater when a $5 million gift to the then School of Business and Administration helped fund the construction of John and Lucy Cook Hall.

“In so many ways, the values that were instilled in me at Saint Louis University have defined who I am today,” Mr. Cook said at the time.

In early 2017, Mr. Cook generously agreed to make the naming of the business school available to other benefactors to encourage a large gift to the school. In 2018, alumnus and trustee Dr. Richard A. Chaifetz who made a $15 million gift to the school. Cook Hall will remain named for John and Lucy Cook.

Mark Higgins, Ph.D., the Edward Jones Dean and Professor of Accounting at the Richard A. Chaifetz School of Business, commented on the far-reaching impact of Cook’s commitment.

“John was a great friend of the business school and the University,” Harshman said. “He was truly a ‘man for others’ and lived his life to help the most marginalized around the world.”

Dean Emeritus Neil Seitz, Ph.D., worked closely with Mr. Cook during the construction of Cook Hall, and he and his wife became good friends with the Cooks.

"Bente and I visited John and Lucy in late March," Seitz said. "John’s physical limitations were great, but his zest for life and his enthusiasm for his philanthropic causes were undiminished.  It was inspirational to hear him talk of his continued joy.

"John forever changed the trajectory of the business school with the gift that moved us from a hope for a new building to John and Lucy Cook Hall, a beautiful state-of-the art space that supported new programs and also transformed the ways our students learned," Seitz added.

Mr. Cook is survived by his wife, Lucy; sons James and Thomas Cook; and daughter Christine. He lived in Atlanta, Georgia, at the time of his death.

A funeral Mass will be celebrated at 3 p.m. Tuesday, May 29, at Holy Spirit Catholic Church in Atlanta, Georgia.