ST. LOUIS – Saint Louis University honored one its proudest sons this weekend at the 2018 commencement ceremony. Tim Gruensfelder was a senior in the Richard A. Chaifetz School of Business, double majoring in accounting and finance. 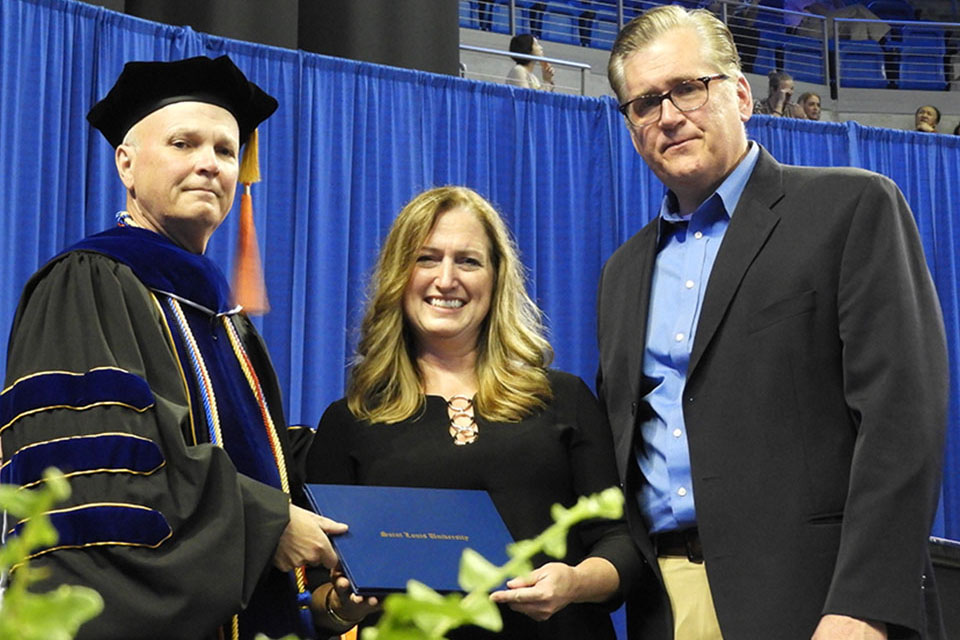 He died Tuesday, Jan. 2, 2018, at the age of 22, from complications of anaplastic ependymoma, a brain and spinal cancer he was diagnosed with when he was 4. SLU held a memorial Mass Feb. 9.

On Friday, Bob and Denise Gruensfelder accepted his diploma on behalf of their son. They received a standing ovation from Tim's fellow students and their families.

“He loved SLU,” Bob Gruensfelder said. “He looked for a campus that suited him. He said the people here were so great. This was really his home.”

Complications from the cancer required Tim to use a wheelchair, but that didn’t stop him from fully experiencing life at SLU. He was a student leader with Oriflamme, a group of students who serve as mentors and guides to SLU during the first few weeks of a new fall semester. He also served as a student ambassador for the Office of Admissions.

“I am so fortunate to have had the opportunity to know Tim as a student, an ambassador, and as a friend,” said Andrea Hitsman, assistant director for campus visits in the Office of Admission. “His enthusiasm for SLU was evident even during his interview for the job; we knew he was going to be an amazing University Ambassador.”

His excitement was contagious and I know he was directly responsible for helping many students make that final decision to become a Billiken.'

Andrea Hitsman, assistant director for campus visits in the Office of Admissions

Hitsman said the Admissions staff looked forward to working shifts with Tim because his attitude was always so positive and fun.

“I loved watching him talk to prospective students and their parents about his love for SLU. His excitement was contagious and I know he was directly responsible for helping many students make that final decision to become a Billiken,” she said. “He approached his work with professionalism, compassion and an eagerness to learn more, be more, and give more. I will remember him for the rest of my life and I know I speak for the rest of the admission staff and University Ambassadors that we are so grateful for the time we got to work with him.”

His father told the Daily Herald that Tim cherished his health and independence while at SLU. 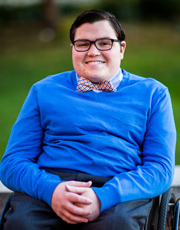 “He moved to an apartment with friends and didn't need us anymore,” Bob Gruensfelder told the suburban Chicago newspaper.

His cancer returned during the second half of his junior year, his parents told the Daily Herald, and forced Tim to postpone his return to SLU, where he was a strong student.

“Tim was intelligent of course – look at his grades,” said Bidisha Chakrabarty, Ph.D., the Edward Jones professor of finance in the Richard A. Chaifetz School of Business. “But beyond that he was funny, hard-working and had a remarkably sunny disposition.”

Chakrabarty said what she will miss most about Tim are short chats they used to have before the start of each class. “He was so eager to learn that he made teaching fun as well.”

Debbie Barbeau, assistant dean of undergraduate programs at the Richard A. Chaifetz School of Business, echoed Chakrabarty, calling Tim the type of student every teacher wants to have in class.

“I also had many opportunities to interact with Tim outside of the classroom, which allowed me to see more than just the academic side,” she said. “He exuded passion for whatever it was that he was working on – he was an inspiration with his upbeat attitude and a smile that could turn a bad day into a good day.  The SLU community has been enriched through his many contributions.”