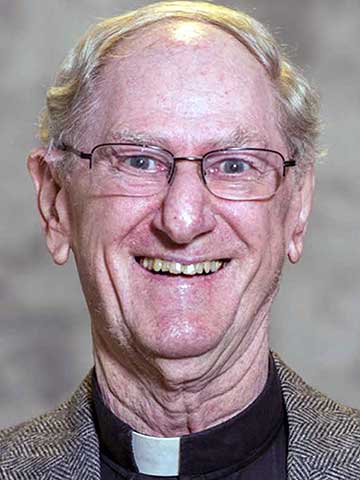 Born in St. Louis, Father Hutchison attended Immaculate Conception School and St. Louis University High School before entering the Society of St. Stanislaus Seminary in Florissant. Following First Vows and Juniorate studies there, he received his undergraduate degree in philosophy at Saint Louis University in 1959 and went on to earn his Master’s in sociology and Licentiate in philosophy from SLU in 1961.He completed his Ph.D. in social work and sociology at the University of Michigan in 1972.

For more than three decades, Father Hutchison served Saint Louis University as a professor and later dean of social work as well as director of SLU’s Institute of Applied Gerontology.

During most of those years he was also an assistant pastor at St. Matthew’s Parish (1973-1989) and served as the Superior of the Jesuit community there from 1986-1989. After a sabbatical in Washington, DC where he did work for Catholic Charities USA and was interim Secretary for Social Ministries at the Jesuit Conference, he returned to teaching at SLU from 1997 to 2005. Beginning in 2005, he served as treasurer on the Board of Directors of Northside Community Housing. He engaged in pastoral ministry at St. Matthew’s from 2005 to 2012 until his assignment to the Fusz Pavilion in 2013.

Father Hutchison was preceded in death by his parents, Joseph B. Hutchison and Theresa Haak Hutchison, brothers Joseph and Raymond, and sisters Louise and Rita Hutchison. He is survived by his brother Robert.

Visitation will be held from 4 to 7 p.m. Wednesday, Nov. 7, at St. Francis Xavier College Church. A funeral Mass will follow at 7:15 p.m.