Ronald Modras, Ph.D., a professor emeritus of theological studies, died Oct. 17. He was 81. 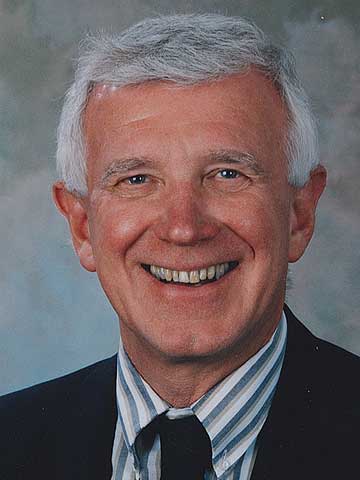 Dr. Modras joined the Saint Louis University faculty in 1979 as an associate professor of theological studies. He retired in 2012. During his more than 30 years at SLU, he was well known as a solid undergraduate teacher, a significant publisher and a respected colleague.

Associate theology professor David Oughton, Ph.D., experienced Modras as both a teacher and a colleague.

“He was on my doctoral committee between 1986 and 1998,” Oughton said.  I was able to take two doctoral seminars with him. Ron was instrumental in my becoming part of the Department of Theological Studies in 2009. I found him to be brilliant, scholarly and compassionate. He was one of my great teachers and an important colleague in our department.”

Associate theology professor Grant Kaplan, Ph.D., heard Modras talk about Ignatian humanism at a 2006 AJCU event in Cleveland not knowing that a year later this impressive speaker would also be his colleague and friend.

“Ron Modras was a good man and theologian,” Kaplan said. “I think he was the first faculty member who invited me to his house after I came to St. Louis. He also hosted a lovely engagement party  for me and my soon-to-be wife. He announced with tears in his eyes that the same had been done for him when he married his wife, Liz, and that we were to carry on the tradition.”

Dr. Modras’ knowledge and caring also extended to other programs at the University and, as noted by Julie O’Heir, program manager for SLU’s Prison Education Program, well beyond the campus when he taught “Jerusalem: City of Three Faiths,” at the Eastern Reception, Diagnostic and Correctional Center (ERDCC) in Bonne Terre, Missouri, in 2010.

Dr. Modras is survived by his wife, Mary Elizabeth; a brother and sister; as well as several cousins, nieces, nephews, grand-nieces and nephews.